'The most horrible pain in the world to be a native': Survivor of B.C. residential school breaks his silence

'The most horrible pain in the world to be a native': Survivor of B.C. residential school breaks his silence

News of the remains of 215 children being discovered at the site of a former residential school in British Columbia jolted Clayton Peters, whose seven years of torment there have been mostly encased in silence around fears of soap and strappings, a cold dark room and dreams of running away.

“I'm finally telling somebody about it, all the stuff I went through in there. Like it's out there, it's not a secret,” he said. “It was the most horrible pain in the world to be a native, to be an Indian back then.”

The Kamloops Indian Residential School was Canada's largest such facility operated by the Roman Catholic Church between 1890 and 1969 before the federal government took it over as a day school until 1978, when it was closed.

Chief Rosanne Casimir of the Tk'emlups te Secwepemc First Nation said the remains of the children, some believed to be as young as three, were confirmed with the help of ground-penetrating radar.

Peters and his brothers were forcibly taken to the school in 1967. He remembers thinking that kids who'd suddenly disappeared from there were the lucky ones because they'd managed to escape, after his unsuccessful attempt that led to harsh consequences.

“I always thought they ran away like I did, that they made it, that they were free,” he said crying.

Now, he thinks some of the children he knew may be buried at the site of a former apple orchard where students were forbidden to go but could pray nearby.

Peters and his three brothers - JP, 12; Dale, 9; and eight-year-old Cordell - were taken to the residential school after a man in a green station wagon belonging to the then-federal Department of National Health and Welfare showed up at their house on a sunny day, he said.

Pete Peters knew his boys would end up at the residential school where both he and his wife, Nancy, had spent years as children, and he had to protect them, his then-10-year-old son remembered.

When a standoff with police had his gun-toting dad being hauled off to jail, young Peters took the chance to bolt. But he was captured in a field when police returned later so he and his brothers could be transported to the school.

At the residential school, he soon learned all siblings were kept on separate floors, Peters said, adding he saw one of his brothers, JP, about five years later and they decided to run away, only to be caught and beaten by a priest.

Being beaten and molested was part of the ongoing abuse children suffered at the school, he said.

“After they strap you and strap you, who are you going to cry to?” he said. “You learn to hate, to hold hate in you.”

Children who spoke their own language were disciplined, Peters said.

“They would stick bars of soap in their mouth and make them eat it.”

Children were also forced to scrub themselves with soap containing lye, which burned their skin, “so they could take the brown off of them,” he said.

“They beat me up so many times for not using it, but I wouldn't use it,” he said. “I quit showering because they just wanted to hurt you, that's all.”

Children were not given medicine when they were sick but confined to a dark room alone, Peters said of the place that was also used as a form of punishment.

“I was in there so many times in that dark room, for sometimes doing nothing, just for looking at them,” he said of staff. “You're supposed to look down as soon as they look at you. Your eyes have to hit the floor.”

At age 17, Peters was kicked out for misbehaving, but his brothers would not leave until later.

The emotional toll of his experience had him drinking excessively, the same as his parents, who were both found dead of alcohol poisoning on the same day 34 years ago, Peters said.

“I was sad all my life. When I left that school, I fought everybody. I fought every white man that bumped into me. I was so angry,” he said. 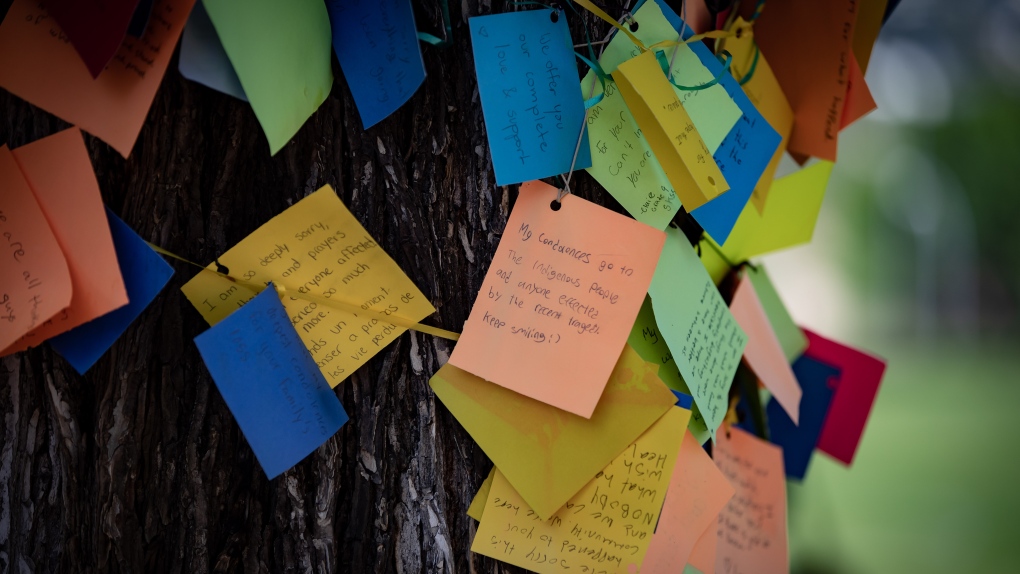 Messages are written on pieces of paper and hung from a tree outside the former Kamloops Indian Residential School as part of a growing makeshift memorial to honour the 215 children whose remains have been discovered buried near the facility, in Kamloops, B.C., on Monday, May 31, 2021. (Darryl Dyck / THE CANADIAN PRESS)

Peters and his wife, Sherry Peters, married in 1983 and have a 34-year-old daughter and four grandchildren he is extremely protective of.

He said he has come to understand why his mom and dad didn't know how to parent, and he has tried so hard to do better.

Peters stopped drinking and got a job as a wastewater operator at two treatment plants in the Vancouver area before the family returned to Kamloops in 2010.

He said it's time the Roman Catholic Church issued a formal apology for the suffering endured by generations of First Nations families.

“I just want them to say they're sorry about what happened in there,” he said.

Archbishop Richard Gagnon, president of the Canadian Conference of Catholic Bishops, said in a statement Monday the news of the recent discovery is “shocking.”

“As we see ever more clearly the pain and suffering of the past, the Bishops of Canada pledge to continue walking side by side with Indigenous Peoples in the present, seeking greater healing and reconciliation for the future.”

Angela White, executive director of the Indian Residential School Survivors Society in British Columbia, said the organization has been inundated with people being retraumatized after learning about the children's remains.

“Many are making connections and saying, 'Oh, now that makes sense.' They're making sense of things that were happening at the school but they couldn't explain as a child,” she said.

Survivors are also feeling validated that they weren't imagining their experiences, some that were whispered among them for years because “who's going to believe you? You're just a dumb little Indian,” White said.

While some survivors shared the abuse they endured at hearings of the Truth and Reconciliation Commission, which filed its report to the federal government in 2015, too many of the calls to action still haven't been acted on for the sake of those carrying so much grief, she added.

- By Camille Bains in Vancouver

This report by The Canadian Press was first published June 1, 2021. 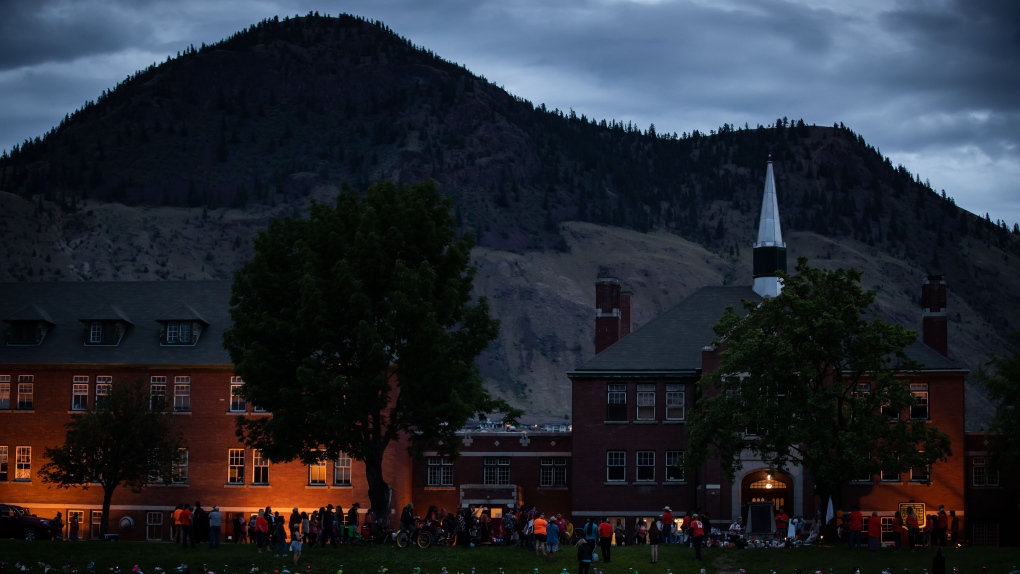 People gather outside the former Kamloops Indian Residential School to honour the 215 children whose remains have been discovered buried near the facility, in Kamloops, B.C., on Monday, May 31, 2021. (Darryl Dyck / THE CANADIAN PRESS)