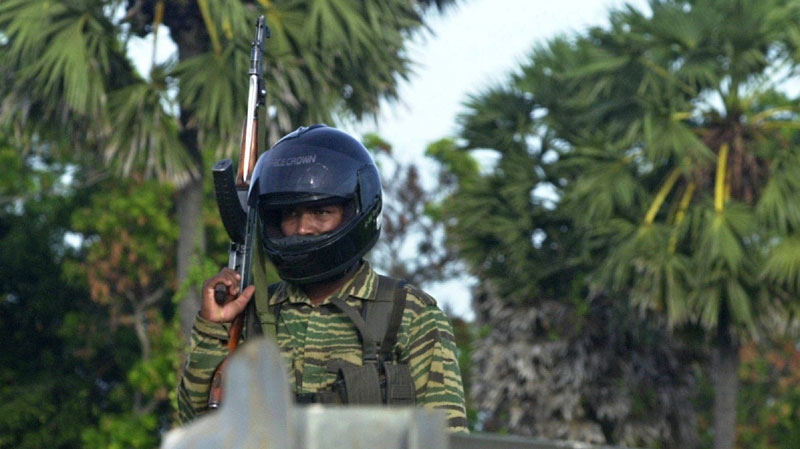 Seven months after a risky voyage in a crammed cargo ship from South Asia, a migrant who arrived on British Columbia shores seeking refuge has been ordered deported from Canada because he admitted former membership in the Tamil Tigers.

He is the first and only person so far among 600 migrants who sailed here in two boats over two years to be facing ejection, a ruling on Tuesday the federal government called an "unmitigated victory" and that refugee advocates questioned as unfair.

The decision was based on admissions by the man that he fought in at least one battle for the banned terrorist organization during seven years as a member, said the adjudicator for the Immigration and Refugee Board.

Michael McPhalen said it wasn't necessary for the Canada Border Services Agency to prove the man committed serious crimes with the separatist militia, only that he was a member.

McPhalen said he considered it significant that the man did not make any attempts to leave for years and that, when caught, he was not beaten or threatened.

The man, whose identity is banned from publication, stared straight ahead with no expression as he heard the decision.

His lawyer said he'll confer with his client to decide if he'll apply for a judicial review of the decision by the Federal Court, but he has no option to appeal.

The man is one of 32 from among the 492 people who arrived aboard the MV Sun Sea last August who border officials allege participated in terrorism, human smuggling or war crimes.

"Our government will not sit back while Canada becomes a target for increasingly sophisticated criminal operations that are trying to take advantage of Canada's generosity," Chris McCluskey, a spokesman for Public Safety Minister Vic Toews, said of the decision in an emailed statement.

But the Canadian Tamil Congress took issue with the decision, questioning whether being a low-ranking member of the organization actually makes him a national security threat.

"This man was a member a very long time ago and based on the evidence we have, he didn't commit any serious crimes," said David Poopalapillai, the group's national spokesman.

"Why can't we give him a chance to lead another life?"

During the inadmissability hearing, a lawyer for the Public Safety Ministry said the man was shot in a fight against a Sri Lankan navy ship, which ultimately succeeded in securing weapons for the group.

He underwent a year of initial training with the Liberation Tigers of Tamil Eelam, including learning how to shoot a rifle, before being recruited to the naval wing of the group called the Sea Tigers, Carla Medley said.

"His activities were not marginal or minimal," she argued.

The man made his admissions to agency officials during two interviews last fall.

While his lawyer didn't contest the information, he told the hearing his client only joined the rebels "by accident" as a teen tagging along with his friends.

Robin Bajer said the man expressed desire to leave the Tigers but was told by superiors he wasn't allowed. When he tried to "escape," Bajer said he was caught and punished with manual labour. Eventually he was able to leave and neither side argued he had further involvement.

Simple membership in the organization over a period of time is all that's required to be inadmissible to Canada, Medley told the board, but she did note that the time of the man's membership was during the "height of (the Tigers') terrorist campaign."

Andrew Mack, a Simon Fraser University professor researching civil war and terrorism, said if the man acted merely as a conventional soldier it's "nonsensical" for him to be labelled dangerous, and likely he's been targeted by an oppressive Sri Lankan regime.

"It's not at all clear as to why the (Canadian) government should see this person as a threat," he said.

About 66 of the migrants remain in the B.C. detention centre, and immigration lawyers contend the government has fought tooth-and-nail to keep the people in custody.

The only other man to face an inadmissibility hearing on security grounds so far was ordered released by the immigration board on Monday, after the adjudicator ruled he was a civilian who came into "inescapable" interaction with the Tigers as a fact of life during civil war.