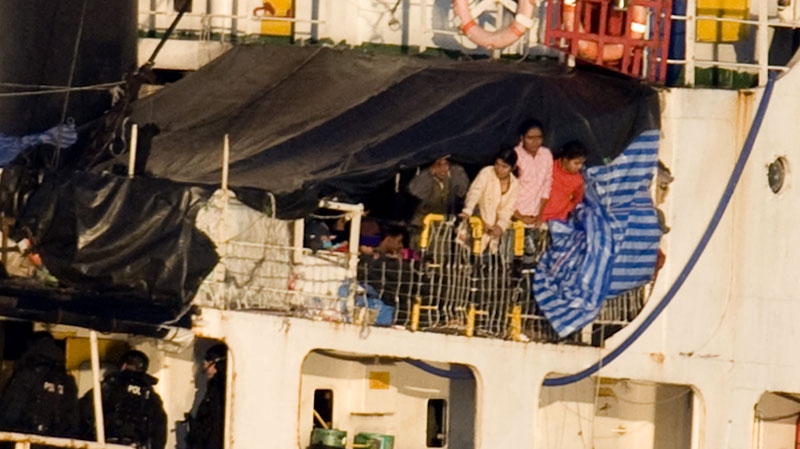 Migrants look over the side of the MV Sun Sea after it was escorted into CFB Esquimalt in Colwood, B.C., Friday, Aug. 13, 2010. (Jonathan Hayward / THE CANADIAN PRESS)

An immigration ruling ordering freedom for the first of at least 32 Tamil migrants accused of posing a national security threat may help loosen the logjam of detainees by tightening boundaries around the process, say lawyers for several of the men.

A man who briefly worked for a garage owned by the Liberation Tigers of Tamil Eelam in Sri Lanka was granted release from a British Columbia corrections centre on Monday after his lawyer successfully argued he had nothing more than civilian ties to the banned terrorist organization.

The man, whose identity is under publication ban, arrived on the West Coast by freighter nearly seven months ago with a group of 492 migrants claiming persecution and seeking refuge in Canada.

While the majority of his shipmates have been permitted to move forward with refugee claims, he is among another group that has experienced a range of prolonged arguments by the Canada Border Services Agency restricting them from starting new lives.

The ruling handed down to the man by a senior member of the Immigration and Refugee Board on Feb. 28 takes pains to keep in check the parameters of what constitutes membership in the terrorist group.

The decision noted whole towns were forced to live under Tiger rule, but many people didn't promote the group's cause.

"It recognizes that people living in Tiger-controlled areas would often have inescapable and unavoidable contact with the LTTE."

But Purtzki and others are still concerned for their clients, saying they've watched the border services agency doggedly pursue strategies to keep the men in detention or set them on a path towards deportation, even after the board has ruled in their favour.

They're now waiting to see how the latest decision factors into future cases.

"There's a very slippery slope and I think the (IRB) members are aware of that and they're going to turn their minds to where the line should be drawn," said immigration lawyer Gabriel Chand, who represents several of the detained migrants.

Lawyers for the Minister of Public Safety have 30 days to appeal the decision. A spokeswoman for the agency said agency lawyers are still considering the options and declined further comment.

Chand recently won a federal court judgment calling the agency's approach an "abuse of the court process." One of his clients, who wasn't detained on security grounds, was ordered released three times without the agency actually setting him free. He was only released last month when the judge said the non-action was unacceptable.

The lawyers are hopeful that that ruling, paired with the latest decision, could constrain some of the "hard-line" tactics they believe are based on a political agenda.

"I think they're trying to win some votes," Chand said, noting the possibility of an upcoming federal election.

Among his clients waiting for an admissibility hearing is a man who worked as a rookie journalist for a Tiger-owned newspaper and claims he only wrote innocuous articles, and a man accused of human smuggling who claims he was asked to help in the engine room during the voyage to Canada.

"The people they are going after are clearly, clearly no security threat, no danger," Chand said.

An earlier group of Tamil migrants who showed up on B.C. shores in 2009 were all released within several months and none were subject to admissibility hearings.

Purtzki said after Monday's decision that his client is quite relieved to have the toughest part of the ordeal behind him and plans to move to Toronto where he has friends. He won't be released from custody until an individual presents for him a $1,000 bond.

An admissibility hearing for a second man is scheduled for Tuesday, where the government will again argue detention on the grounds of membership in a terrorist organization. A handful more are expected over the next few months, while others accused of human smuggling and one for war crimes have yet to have hearings scheduled.

Among the entire group who arrived on the MV Sun Sea, 86 people still remain in detention.