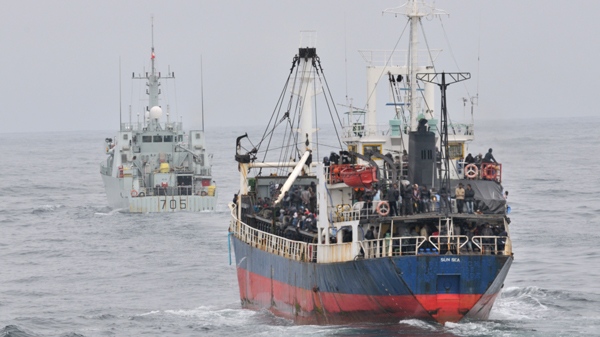 The MV Sun Sea is seen here with Tamil migrants on board in this image provided by the Department of National Defense.

More than a dozen Tamils who landed on B.C.'s coast last August have been involved in war crimes, terrorism or human smuggling, say government officials who want them ejected from Canada.

The Canada Border Services Agency has referred 15 cases back to the Immigration and Refugee Board for admissibility hearings, with a recommendation to dismiss their refugee claims.

Melissa Anderson, spokeswoman for the board, said Thursday the cases all involve men and 14 of the 15 are accused of being involved in a terrorist organization.

The border agency also alleges one of those 14 took part in human smuggling, while another was involved in war crimes.

The 15th man is alleged to be ineligible because of his criminal background.

Of the 492 migrants who arrived on the MV Sun Sea last August, 307 people have been released and 136 remain in custody, including 11 refugee claimants whose positive release decisions from the board were overturned by a federal court. Among the 136, there are 12 women.

Shakila Manzoor, spokeswoman for the border agency, said the safety and security of Canadians is the agency's priority.

"The CBSA is exercising due diligence in the screening of all irregular migrants for both security and criminal threats," she said in an email.

Manzoor wouldn't say how many more claimants the agency would recommend the immigration board reject on the grounds they were part of a terrorist group.

During several hearings in B.C., federal government lawyers have fought the release of several would-be refugees over allegations they are members of the Tamil Tigers, a banned terrorist group operating during the civil war in Sri Lanka.

All of the 76 people who came in on the Ocean Lady in October 2009 were released within a few months of landing in Canada.

Criminal charges haven't been laid yet against anyone who may have been involved in smuggling the migrants into Canada aboard the two ships.

RCMP spokesman Const. Michael McLaughlin said investigators will forward a complete package with allegations against all suspects when it's ready -- a package he said would be massive.

"For this particular file, we've got to make sure this investigation is complete before we start arresting and charging," he said.

"Simply because, if we were to tip our hand too quickly it could adversely affect the rest of the investigation."

McLaughlin said dozens of investigators have been working on the case for months.

"It's a huge task and we intend to do it right," he added.

Anderson said none of the 15 migrants have admissibility hearing dates yet.

"These things take time, they're very complex admissibility hearings, none is ready to go ahead right now," she said. "If these allegations are proven correct, essentially it would prevent their refugee claim from continuing."

"They are treating our country like a doormat," he said.