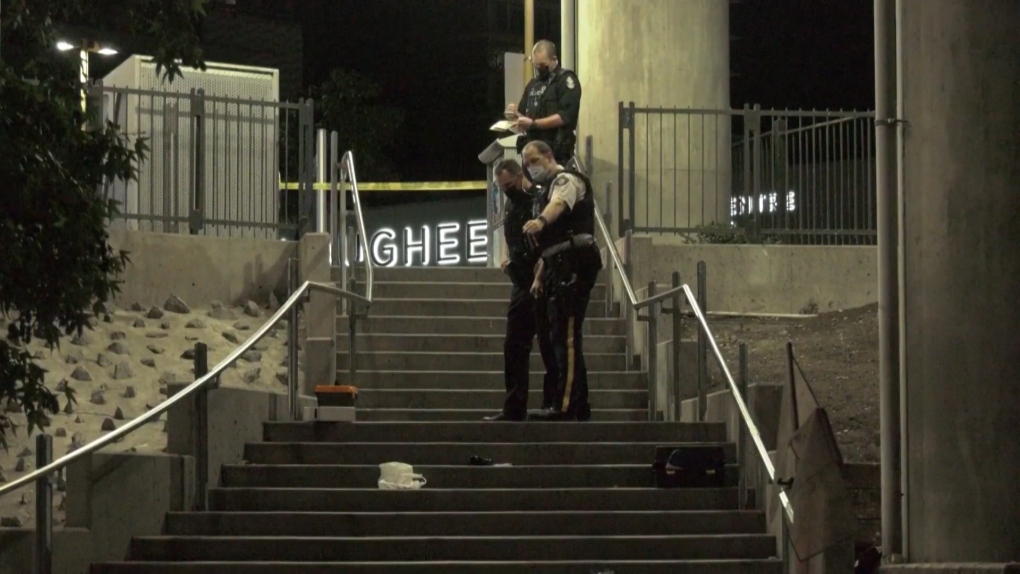 A stabbing at Lougheed SkyTrain Station on Sept. 16, 2021, is under investigation.
Vancouver -

A stabbing at a Metro Vancouver SkyTrain station is under investigation after a man was taken to hospital with serious injuries Thursday.

The incident unfolded at the Lougheed Town Centre station just after 8:30 p.m. In a statement released the next day, Metro Vancouver Transit Police said the victim reportedly saw three men standing outside the station, throwing glass bottles on the sidewalk. He approached the group to have them stop.

"One of the men in the group shoved the man to the ground. As he rose to his feet he was allegedly attacked by the whole group who began throwing punches," MVTP's statement said.

"The victim attempted to defend himself but at some point noticed he had been stabbed and was bleeding profusely."

Mounties and transit police arrived at the scene shortly after. The victim was taken to hospital with serious but non-life-threatening injuries.

Police weren't able to find the three suspects, but descriptions were given. The first suspect is described as white and about 5'3" tall. He has a slim build and short dark hair. He was wearing a grey hoodie, black shorts and was carrying a skateboard.

Another suspect is described as a dark-skinned male, about 5'6", with an "average to husky build" and a dark brown afro. He was wearing a red hoodie.

The third suspect is described as having a slim build and being about 5'6" tall.

All three are believed to be in their early 20s.

"Transit police never recommend that anyone put themselves in harm's way," the statement said. "However, the man in this incident did what he believed was right by trying to stop this group and their dangerous behaviour."

Anyone with information about the incident is asked to contact transit police at 604-515-8300.