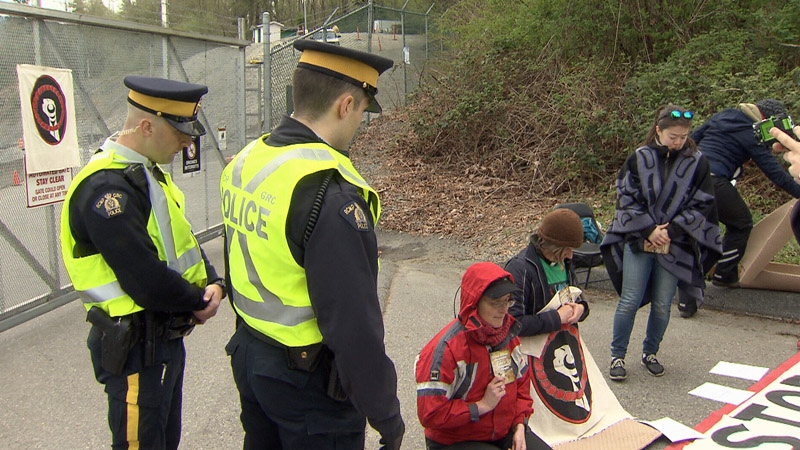 Spiritual leaders were among those gathered in protest of the Trans Mountain pipeline expansion in Burnaby.

Demonstrators stood outside the Westridge Marine Terminal on Bayview Drive Friday morning, holding out copies of the United Nation Declaration on the Rights of Indigenous Peoples.

The UNDRIP was adopted in 2007, and was meant to establish a framework of minimum standards for the survival, dignity and well-being of the world's Indigenous people.

Last week, Coast Salish spiritual leaders issued a call for people of faith to join them at the Kinder Morgan facility in solidarity.

The ongoing protests have seen nearly 200 arrests in the last couple of months, including those of Green Party Leader Elizabeth May, and NDP MP Kennedy Stewart, who represents Burnaby South.

Friday was no exception, with Mounties taking three people into custody over violations of a court-ordered injunction granted earlier this year.

A statement from Kwekwecnewtxw, a group representing protesters dedicated to fighting against the Kinder Morgan project, identified those arrested as prominent faith leaders. The group said they were arrested for "fulfilling what they called a 'moral obligation' to stand in solidarity with Indigenous peoples and their rights to free, prior and informed consent."

In the statement, a deacon for the Anglican Church from Alberta said she's seen the impacts of tar sands expansion on her community of Fort Chipewyan.

"All the water runs downstream from the oil sands into Lake Athabasca," Rev. Vivian Seegers said.

"All the moose, the caribou, the fish, the lichen: all of that is destroyed by all of the toxins downstream. It’s not safe to eat our traditional foods anymore. The only food that is available is from down south, that’s flown up. It’s a very desperate situation."

A representative of the RCMP said the demonstrators were arrested after allegedly breaching the order which states they cannot obstruct, impede or prevent access to the Trans Mountain facilities. Protesters were seen blocking access for workers and vehicles Friday morning.

In a statement, Cpl. Daniela Panesar said they were handed copies of the injunction and told if they didn't leave they faced arrest. After being asked to move several times, they were arrested.

All three have since been released and are scheduled to appear in court in the coming weeks.

Earlier this week, some protesters accused of violating the injunction learned they could face criminal charges. The province's prosecution service is considering charges of criminal contempt of court against several people including May and Stewart, but the decision will be up to a pair of newly appointed special prosecutors.

Friday's arrest followed days of pipeline-related headlines, including an announcement from B.C.'s attorney general that the province is prepared to sue Alberta should it pass and enact a bill introduced Monday that would allow it to turn off the bitumen taps to Canada's West Coast.

Should Alberta choose to stop or slow oil shipments to B.C., residents of the province can expect gas prices to skyrocket as stations deal with a severe shortage, experts said.

An expert based in B.C. said such actions would violate Canada's constitution, but B.C.'s decision to ask the court whether it can restrict shipments through the Trans Mountain pipeline – a suggestion the Alberta Premier called "unconstitutional" – is within the province's rights.

Attorney General David Eby announced the government's lawyers will file the case to the Court of Appeal by the end of the month.

At the same time, two polls released back-to-back by different agencies suggested that support for the pipeline in B.C. may be growing. An Insights West poll conducted for CTV News of 1,000 people found 54 per cent of respondents supported the pipeline twinning, while 36 per cent said they opposed.

Support was strongest in areas of B.C. outside of the western Lower Mainland and Vancouver Island.

The Angus Reid Institute released results of a similar poll it conducted a day prior, which found 54 per cent of respondents gave it a thumbs up, and 38 per cent were opposed.