For the second time in as many days, a poll suggests more than half of British Columbians are in favour of the Trans Mountain pipeline expansion.

While protesters and some politicians are so passionate about stopping the Kinder Morgan project that they're willing to be arrested, data collected from recent polls suggests they are not the majority.

A survey conducted for CTV News by Insights West showed 54 per cent of 1,000 people polled support the twinning of the pipeline used to transport diluted bitumen from Alberta to B.C. The latest numbers show 11-point jump in support compared to results of a poll conducted in the fall, and opposition has dropped 10 points to 36 per cent.

"Those protesters on the sideline that are saying every British Columbian doesn't support the project – it's not really the case," said Insights West president Steve Mossop.

The results were made public a day after Angus Reid Institute revealed it received nearly identical feedback, which suggested 54 per cent of B.C. residents supported the project and 38 per cent are opposed.

The percentage of people who strongly support the pipeline has increased in particular, Insights West said, jumping 15 points over the last seven months to 34 per cent. Strong opposition has decreased seven points.

"This is a political battle that's been going on in the court of public opinion," said Michael Prince, political science professor at the University of Victoria.

"And I think that these polls suggest that public opinion is shifting." 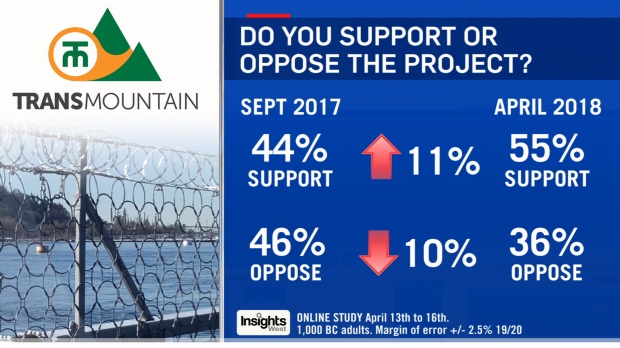 By the numbers: Breakdown of results

While the majority of those polled said they were in favour of the pipeline, support was strongest outside of southwestern B.C. More than 60 per cent of residents living outside of the Lower Mainland and Vancouver Island approve of the project.

Results also varied by age and gender. Nearly 70 per cent of respondents 55 and older approve, but those aged 18 to 54 were less inclined to say they supported it. Half of women polled were in favour, compared to 62 per cent of men.

The results were also broken down by how respondents voted. Of those who said they cast their ballots for the BC Liberals, 81 per cent said they approved of the pipeline.

Four-in-10 NDP voters supported the pipeline, while 53 per cent were against.

"They should be concerned. Forty per cent is not a small number," Mossop said.

And 37 per cent of Green voters gave it a thumbs up (54 per cent were opposed), numbers Prince called "quite surprising."

"I think there are some people afraid and fear's being put to them. Again, it's important to remember when you're elected to represent, you're elected to do that, and not follow the latest opinion poll," he said. 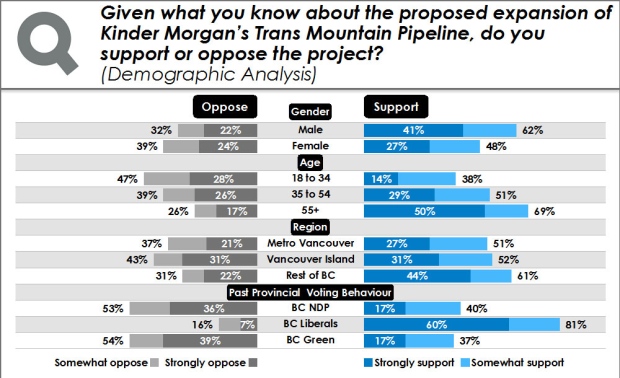 The majority of people who voted NDP in 2017 said they still support John Horgan, though 22 per cent said their support has waned due to pipeline politics. Most who voted green also support Horgan, but 25 per cent oppose his pipeline stance.

When it came to federal politics, 85 per cent of Conservative voters, 57 per cent of Liberal voters and 33 per cent of NDP voters support the expansion.

Respondents were asked what solution they'd prefer to the decision by Texas-based Kinder Morgan to halt non-essential spending, including a bill introduced in Alberta earlier this week that would allow the province to control its oil shipments.

The move which B.C.'s Attorney General David Eby referred to as "a bluff" could cause gas prices on Canada's West Coast to skyrocket if approved and enacted. Bill 12 was a direct response to stalling tactics used by B.C.'s government in its ongoing battle to block the Kinder Morgan project, or at least limit the amount of fuel flowing through the pipeline to reduce risk of environmental disaster.

While the majority want the pipeline to be built, 68 per cent said they're against the Alberta legislation. Sixty per cent also oppose a proposal from the federal government to use federal funds to buy all or part of the pipeline.

Insights West also asked respondents how likely they thought it was that the pipeline will be built. More than eight-in-10 said it had a 50 per cent chance or better, including 12 per cent who were completely certain.

The survey of a representative sample of B.C. adults was conducted online between April 13 and 16. The data has been weighted based on Canadian census figures for age, gender and region, and is considered accurate to within 2.5 percentage points, 19 times out of 20.

With a report from CTV Vancouver's Shannon Paterson 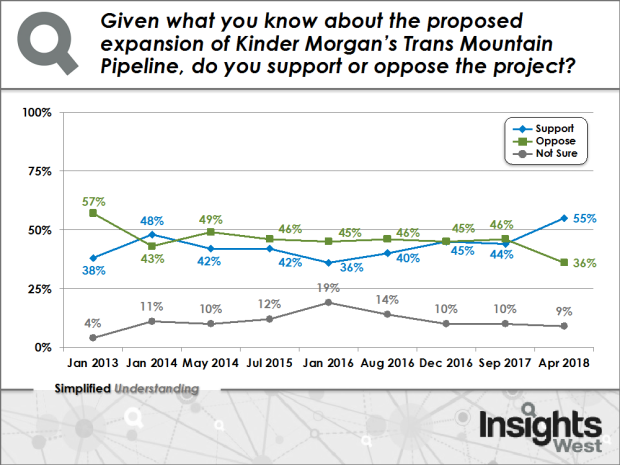