For decades, survivors who once spent time at the school told the stories of peers who suddenly vanished. Some believed the missing children had run away, but many always suspected something more sinister.

Cultural protocols call for Monday to mark the end of a year of mourning for the missing children, but for survivors and the families of the children who never made it home, the healing journey will continue.

“When I first shared the news, it was devastating for many of our community members,” Casimir said last week. “For many, this is about our collective history. And it’s about those meaningful steps moving forward.”

Since the announcement of the Kamloops graves being located, hundreds more potential grave sites have been found at residential schools across the country.

The federal government declared Sept. 30 a holiday known as The National Day for Truth and Reconciliation.

And in April, at the Vatican, Pope Francis delivered a historic apology to delegations of Indigenous, Inuit and Metis Canadians on behalf of the Catholic Church, which administered many of Canada's residential schools.

The next steps for the Tk'emlúps te Secwépemc remain to be finalized, but Casimir says discussions are ongoing about possibly exhuming the remains of any children in the unmarked graves so they can be repatriated to their First Nations. 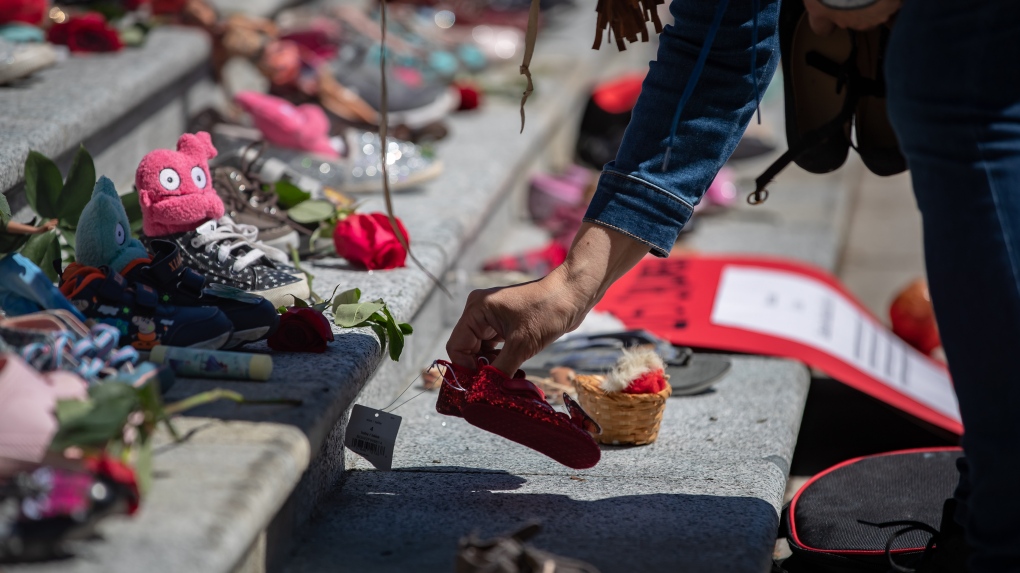 A woman places one of 215 pairs of children's shoes on the steps of the Vancouver Art Gallery as a memorial to the children whose remains have been found buried at the site of a former B.C. residential school, on Friday, May 28, 2021. (THE CANADIAN PRESS/Darryl Dyck)

'UNTIL ALL THE BABIES ARE FOUND'

In Vancouver, Haida artist Tamara Bell created a memorial honouring the victims and survivors of the Kamloops Residential School the day after the Tk'emlúps te Secwépemc announced what the search of the site had found.

At the time, she told CTV News decided on shoes, to give the public an understanding of the scope of the discovery. Bell said she woke up early, cried, composed herself, and came up with a plan.

In the year since, the steps of the Vancouver Art Gallery have been lined with hundreds of pairs of children's shoes, stuffed animals, placards and paintings.

Desiree Simeon, who is also from the Haida Nation, is one of a small group of people who have been keeping vigil and watching over the memorial.

"I spend 24/7 here, day and night. I practically live here. I do have a home, but I reside here as a second home," she said on Sunday as she reflected on the impact of the memorial as she prepared to mark the anniversary.

"What we are looking for is to open eyes more to what we've already known for generations after generations of all this abuse. There are always tons of people that are shocked by what they hear from us when we provide the information as to what happened to the children."

While the future of the memorial has not yet been decided, Simeon says there are no plans to dismantle it any time soon.

"This vigil is going to be here till all the babies are found," she said.

On May 28 there will be a ceremony at the site.

There will be singing, dancing food -- the traditional way. Everybody's invited and we encourage them to bring more stuffed animals and more shoes," she said.