An employee at a popular Vancouver restaurant has been fired for asking a patron to take off their "Make America Great Again" hat.

Darin Hodge was a manager at the Teahouse, located just south of Third Beach in Stanley Park, when a customer came in Tuesday evening sporting the red cap.

The hat was popularized by U.S. President Donald Trump on the campaign trail back in 2016 and has become a symbol for one side of the deeply divided political climate that has settled over the country since.

"As a person with a strong moral backbone, I had to take a stand against this guest's choice of headwear while in my former place of work," Hodge told CTV News in a statement Friday. "The MAGA hat has come to symbolize racism, bigotry, Islamophobia, misogyny, white supremacy, homophobia."

According to the restaurant's general manager, Andy Crimp, Hodge asked the patron to remove the headwear. The customer argued they had a right to wear the hat and left the establishment.

In his statement, Hodge denied explicitly refusing to serve the customer wearing the MAGA hat. The restaurant, however, said Hodge's actions were not in line with company policy and Crimp had to make the difficult decision to let him go.

Crimp said that while he's personally sympathetic to Hodge's stance on the MAGA controversy, he's "disappointed" that the employee was not able to keep his political opinions and his job separate.

"I believe that everyone has a right to their own opinion and to have their own values and their own philosophy of how they want feel and believe, but I think that when you're at work and you're a manager, you have to set an example for the people who are working for you," he said. "We don't want people to feel unwelcome in the restaurant and we don't want to set up an environment where employees feel like they have the right to refuse service to people who come into the restaurant." 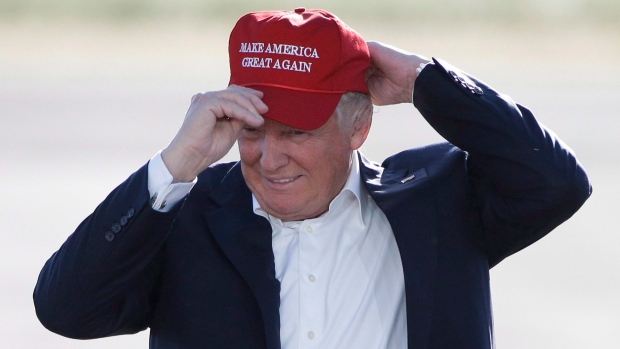 In the days since news of Hodge's firing became public, the Teahouse's parent company has emphasized that the his actions do not reflect its values and policies.

"Sequoia does not support intolerance of any kind, and it is because of these principles that we cannot discriminate against someone based on their support for the current administration in the United States or any other bona fide political party," the vice-president of operations for Sequoia Company of Restaurants, Eva Gates, said in a statement.

On the streets of Vancouver, however, public opinion appeared to be mostly in Hodge's favour.

"I don't think he should've been fired. But I think they should've talked to him and talked to the others," said one man, adding that the hat "doesn't mean anything to me except hatred, except bigotry."

Even an American man visiting Vancouver said Hodge's actions were "probably the right thing to do."

But his wife, despite being opposed to Trump and his policies, said no one should be denied or delayed service based on their politics.

Regardless of the mixed reaction, Hodge said he has "absolutely no regrets" about what he did.

"I stand by my decision to ask the patron to remove his hat," he said.