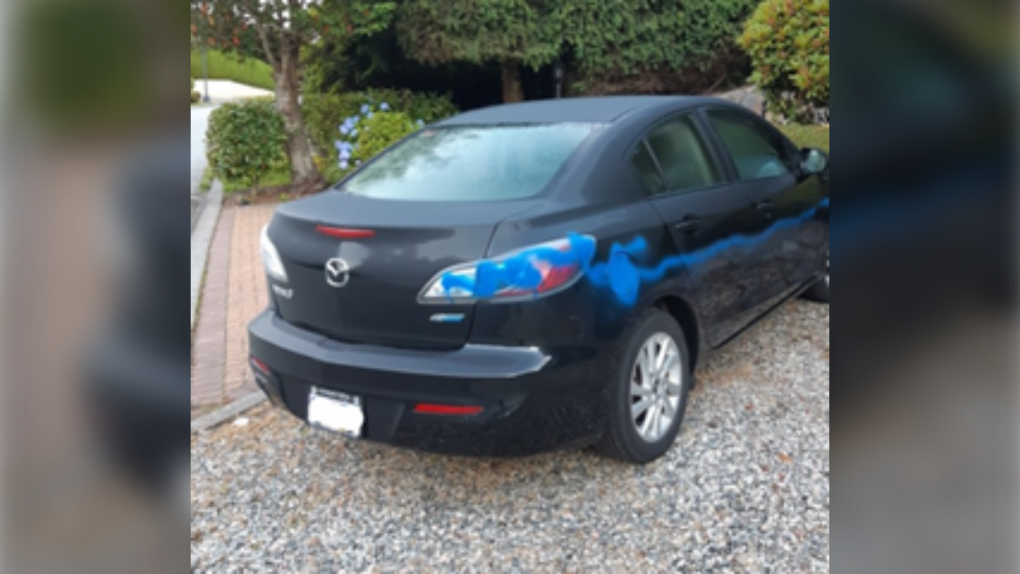 Graffiti found in West Vancouver on July 9, 2019 is seen in this image provided by police.

Police in West Vancouver say they're investigating a case of racist graffiti that caused thousands of dollars in property damage.

In a statement issued Thursday, the force said it received reports of vandalism in the 1300 block of Cambridge Road on Tuesday.

"When officers arrived, they noted extensive damage to a vehicle caused by red and blue spray paint," the release read. "As officers conducted a canvass of the area, they discovered multiple locations nearby marked with red and blue graffiti. Light posts, vehicles, and mailboxes were the primary targets, with one vehicle covered bumper to bumper on both sides."

Police said they also discovered racist graffiti on the side of a second vehicle as well as across the front of a community mailbox.

In total, the property damage is valued at more than $7,000, police said.

Authorities said they would not repeat the details of the racist graffiti to the public, but confirmed the vandalism consisted of hateful words rather than images or symbols.

"This is especially concerning to us given the racist language that was used," said Const. Kevin Goodmurphy, encouraging anyone with information to come forward.

Investigators believe the spray painting was done between 4 p.m. July 8 and 4:30 a.m. the next day.

The case is being treated as a hate crime and the WVPD has alerted the BC Hate Crimes Team.

Anyone with information that could advance the investigation is asked to contact the department at 604-925-7300. Tips can be left anonymously with Crime Stoppers at 1-800-222-8477.