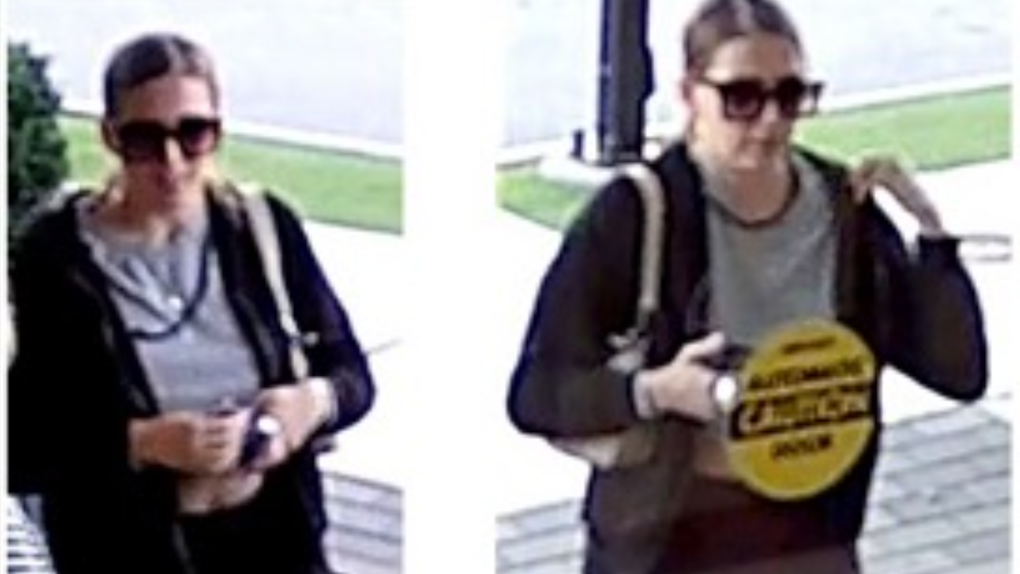 Police say they are hoping to identify this woman. (North Vancouver RCMP handout)

North Vancouver RCMP have released photos of a woman they say is a suspect in a bail scam that resulted in a senior losing thousands of dollars.

Mounties shared multiple photos of the woman Monday, hoping members of the public will identify her. They believe the suspect is connected to a scam that allegedly took place on Sept. 8.

"An elderly woman was defrauded after being contacted by a suspect who told her a loved one was in jail and needed to be bailed out," Mounties said in a news release. "A short time later, a woman came to the victim’s home and collected a large sum of money."

In an initial statement about the incident, police said the victim is in her 80s and was told her granddaughter needed $9,000 to be released on bail.

At the time, police described the suspect as a white woman between the ages of 20 and 30. Police said she's 5'10" tall and has long brown hair, a slim build and tattoos on her left forearm.

"It’s not uncommon for scammers to target the elderly by contacting them by mail, telephone or online," said Const. Mannsoor Sahak in a news release.

"What’s different and concerning is that fraudsters are now showing up at the victims’ doorsteps to collect cash. It’s brazen, and we’re concerned about peoples’ safety."

Another senior was called that same day and was also told her granddaughter needed $9,000 for bail. That woman went to the North Vancouver RCMP detachment to pay and was informed there that she was being scammed.

Police advise members of the public to be careful about posting personal details and names of family members on social media. They also recommend making accounts private and ensuring passwords are unique. Police say it's important to be careful with caller ID numbers that seem familiar, as scammers can use technology that disguises the number they're actually calling from.

The RCMP says it'll never call members of the public to arrange for someone to pick up money from their home.