The number of COVID-19 patients in B.C. hospitals dropped below 500 this week for the first time since late April.

There were 473 test-positive patients in hospital as of Thursday, the lowest weekly total reported since April 14. 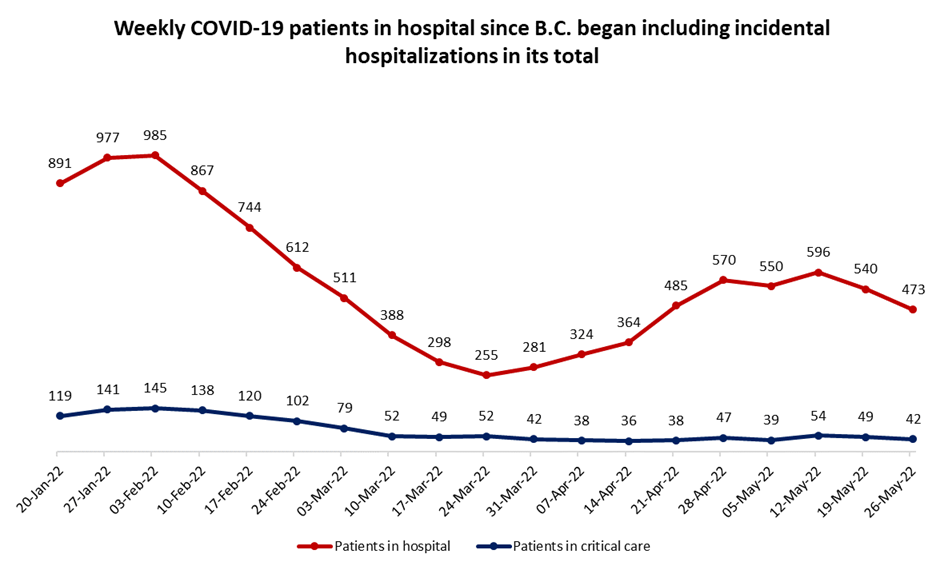 This graph shows the number of COVID-19 patients in B.C. hospitals on Thursdays since the province switched to a "hospital census" model for counting hospitalizations. (CTV)

The number of hospitalized coronavirus patients the province reports each week includes both those with serious illness and those who were admitted to hospital for other reasons and tested positive incidentally.

Since B.C. switched to counting hospitalizations this way in January, the highest total number of patients in hospital on a Thursday has been 985, while the lowest has been 255.

Included in the 473 patients hospitalized as of Thursday were 42 people in critical care with COVID-19.

6TH WAVE PROBABLY PEAKED HIGHER THAN ALL BUT THE 5TH

Thursday's data means the number of patients in B.C. hospitals has now declined for two consecutive weeks and three of the last four.

Alongside other data, that fact suggests that coronavirus transmission in the province is declining after the peak of the pandemic's sixth wave.

While it didn't reach the heights of the fifth wave, which sent cases and hospitalizations soaring in B.C. in December and January, the latest wave was likely the second highest of the pandemic so far, according to B.C.'s independent COVID-19 modelling group.

The group's latest report, released last week, noted that the second Omicron variant wave appeared to be "peaking at a lower level than the first," but hospital occupancy and cases were "still higher than any previous time in the pandemic, prior to Omicron."

The modelling group uses a formula to estimate the true number of daily COVID-19 infections the province is seeing, since B.C. health authorities have severely limited the availability of publicly funded, lab-based testing.

Before B.C. stopped widespread testing, the highest single-day total the province had ever recorded was 1,293.

On Thursday, the B.C. Centre for Disease Control reported 1,358 newly confirmed cases of COVID-19 recorded during the week of May 15 to 21. That figure only includes positive PCR tests and cases epidemiologically linked to them.

Like hospitalizations, the number of BCCDC-reported cases has also declined in recent weeks. Thursday's total was the lowest the agency had reported since it switched to weekly updates on COVID-19 data – rather than daily ones – on April 2.

In addition to the number of patients in hospital each Thursday, the BCCDC also releases totals for the number of newly hospitalized people during the last full epidemiological week, in this case from May 15 to 21.

During that time period, at least 282 test-positive COVID-19 patients were admitted to hospital. That number is expected to increase "as data become more complete," according to the BCCDC.

However, 282 is the lowest starting point for new hospitalizations that the BCCDC has provided in several weeks.

Similarly, the number of new deaths announced for the week of May 15 to 21 is expected to rise, but was lower than the starting point for the last few weeks.

The BCCDC says 42 people died within 30 days of a positive COVID-19 test during the week in question. That doesn't mean all of the deaths were caused by the disease, however. Since April 2, the province has been reporting "30-day, all-cause mortality," rather than attempting to separate coronavirus-related deaths from coincidental ones.

Though all of the aforementioned indicators are currently pointing toward declining transmission of COVID-19 in B.C., wastewater surveillance in the Lower Mainland – which was one of the first indications that the sixth wave had peaked – has begun to level off.

In its weekly "situation report," the BCCDC describes viral loads in wastewater for the week of May 15 to 21 as "steady" at Annacis Island and Iona Island plants, compared to the previous week.

Viral loads have increased for two consecutive weeks at the Northwest Langley plant, while they had declined for a single week at the Lulu Island and Lions Gate plants. The BCCDC describes coronavirus concentrations at all three of these locations as "variable week-over-week."

Just 1,456 of the shots administered during the week in question were first doses, and overall vaccination rates in the province have barely changed in months.

Among those ages 70 and older, 16 per cent had received a fourth dose.