Northern B.C. deaths: Who's dead, who are the suspects and what happened?

Both incidents played out on remote stretches of highway, though they are several hundred kilometres apart.

Authorities have provided few details as they try to piece together what happened to a man found on a highway pullout, and a couple found on another highway. Here's what we do know so far.

The bodies of an Australian man and his U.S. girlfriend were found on the Alaska Highway, also known as Highway 97, about 20 kilometres south of Liard Hot Springs. It's about 1,900 kilometres north of Vancouver, or a 22-hour drive.

It's an area located within a few hours' drive from the Yukon border. The stretch where the bodies were found is remote.

The body of another man was found about 20 kilometres south of Dease Lake, a small community near the Stikine River Provincial Park.

Dease Lake, with a population most recently estimated at 303 people, is about 1,746 kilometres north of Vancouver – a drive Google Maps estimates to take 21 hours.

The scenes are about 400 kilometres apart as the crow flies, but driving, they're about 500 kilometres apart. To get between the scenes, one would take Highway 97 over the Yukon border into Watson Lake, then back down into B.C. along Highway 37.

The path between Liard River Hot Springs Provincial Park and the community of Dease Lake, for example, is estimated to be a 6.5-hour drive.

The suspects tied to the case are then believed to have headed east. They were seen in Meadow Lake, Sask. a week after the first bodies were found, and another burned vehicle tied to the teenagers was found in the Gillam area of Manitoba the next day.

Gillam is another 1,300 kilometres northeast from Meadow Lake, a drive that Google Maps estimates to take between 14 and 15 hours.

Mounties said on July 25 that they believe the teens might still be in Gillam. There were sightings earlier this week, and no vehicles have been reported stolen.

However, the next day, the RCMP said it was possible someone helped the young men without realizing who they were. There have been no further sightings confirmed, but it's possible they've moved on.

On Sunday, July 28, the RCMP received a tip that the suspects might be in York Landing, and converged on the small Manitoba town. However, while officials believe the tip was "credible," no sign was found of the missing teens.

On Aug. 7, crews located the bodies of two teens near the Nelson River in northern Manitoba. 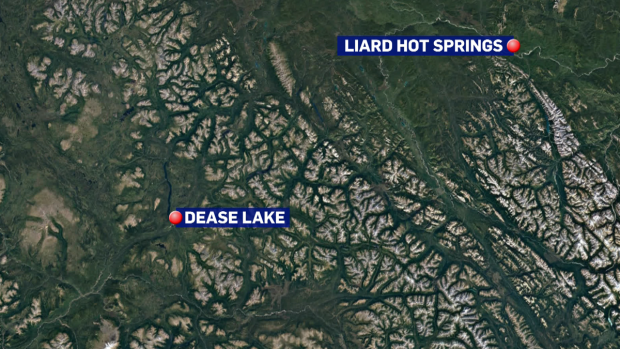 On the morning of Monday, July 15, a highway road worker came across the bodies of a man and a woman on the side of the Alaska Highway. Police said that the couple was fatally shot, and that the case is being treated as a double homicide.

A witness told reporters she'd seen a bearded man who appeared to be in a heated argument with the couple a short time before their deaths but as things looked tense, she kept driving.

On Tuesday, police said they still want to speak to this man and released a sketch of him.

From other witness accounts, it appears that the couple's blue 1986 Chevy van had broken down. One person described seeing the van's hood up, and a young couple sitting on lawn chairs nearby.

The vehicle was located on Highway 97 near where the bodies were found. 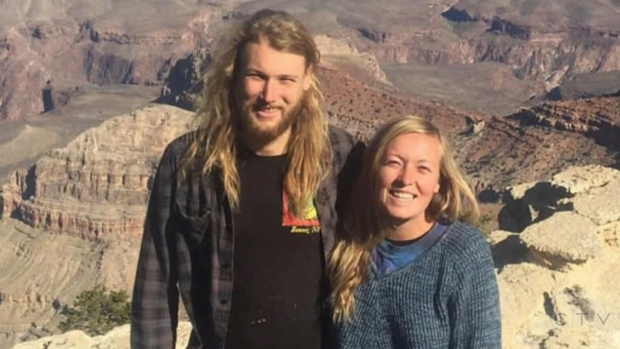 Four days later, Mounties were called to investigate a burning pickup truck on the side of another northern B.C. highway. A truck known to have been driven by two teens was located on Highway 37, but the teens weren't there and hadn't checked in with family or friends in a few days.

At one point, the grey and red truck had a camper on the back. Photos from the scene showed severe damage from the flames.

As police searched the area, they found a man's body at a highway pullout about two kilometres away.

A week after the first bodies were found, on Sunday, July 21, the teenage suspects – who were then considered missing persons – were spotted near Meadow Lake, Sask. The next day, a burned out vehicle which has since been linked to the suspects, was located near Gillam, Man.

On Tuesday, July 23, the teens who were initially considered missing persons were identified as suspects in all three deaths. The next day, they were charged with second-degree murder in the Highway 37 death.

Mounties warned the public that the teens were to be considered dangerous and that they should not be approached.

After an intensive manhunt across the country, two bodies later identified as those of the suspects were found near the Nelson River in northern Manitoba. 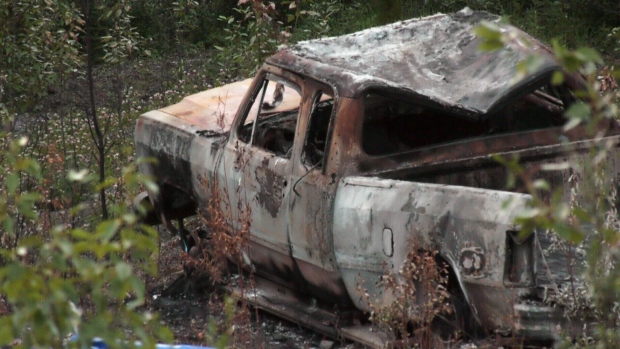 An Australian man and a U.S. woman had been on a road trip in their blue, 1986 Chevy van.

Lucas Fowler, 23, had been on a road trip with 24-year-old Chynna Deese, at the time. Fowler worked at a ranch in B.C., and his long-term girlfriend had been visiting him at the time.

Fowler's boss said he'd spoken to Fowler about fixing up the van for the trip.

The Aussie is the son of an Australian police chief inspector. Speaking to media Monday, Stephen Fowler described his son as a "fun-loving guy" who was vibrant and lived life to the fullest.

Deese has been described on social media as ambitious and a "bundle of free-spirited joy."

"It's a love story that's ended tragically. It's the worst ever love story. We have two young people who had everything ahead of them who have been murdered," Stephen Fowler said.

Mounties also released surveillance footage of the van and the couple in their search for witnesses and more information.

Initially, few details were known about the deceased in the Dease Lake case, including how he died.

Police provided a description of the man found on a Highway 37 pullout, and later confirmed the two teens are suspects in this man’s death. There is more information on the teens below.

But on Wednesday, July 24, they publicly identified the victim as a University of British Columbia lecturer. Leonard Dyck was a father and husband. He taught botany. He was 64. 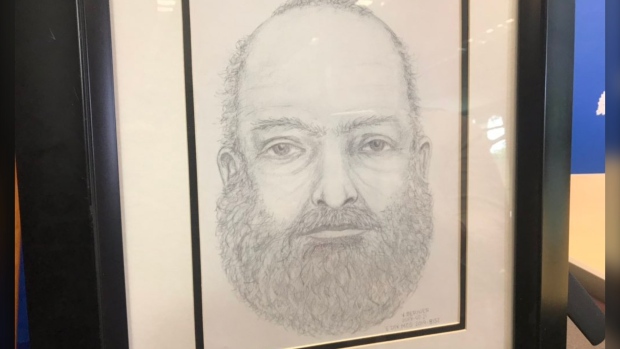 Two suspects in all three deaths

They were considered to have played a role in Dyck's death, and had been charged with second-degree murder. They were also suspects in the double homicide that occurred on another B.C. highway a few hundred kilometres away.

Kam McLeod and Bryer Schmegelsky, of Port Alberni, then left the province, the RCMP said at a news conference.

Police believe the 19- and 18-year-olds were spotted in Saskatchewan, Sgt. Janelle Shoihet said.

They were seen driving a grey 2011 Toyota Rav 4, but that vehicle was found burning in Manitoba, so it is not known what vehicle, if any, they were driving after that.

The RCMP believed the teens were likely still in the Gillam area, as no vehicles had been reported stolen since the Rav 4 was found.

Both were about 6'4" and 170 pounds. McLeod had dark brown hair, brown eyes and facial hair, while Schmegelsky was described only as having sandy brown hair.

Police warned that the two teens may have since changed their appearance.

However, as mentioned previously, their bodies were located in early August in northern Manitoba. The investigation is ongoing, but the remains were confirmed to be those of the teenagers. 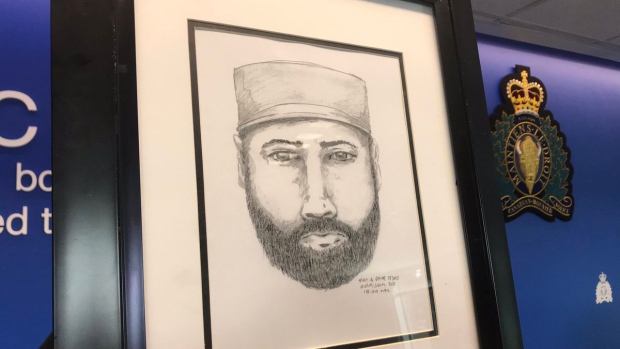 Do you know something?

Anyone who saw Fowler and Deese or their vehicle is asked to contact the RCMP. In addition, those with dash cam video of the area are asked to come forward. Tips can be left with the Northern Rockies RCMP at 250-774-2700 or anonymously through Crime Stoppers.

The RCMP asks anyone with information on the deceased, the truck fire or the whereabouts of McLeod and Schmegelsky during the time between the homicides and the end of the search to contact police.

While they were alive, anyone who saw the two young men was warned not to approach them but to instead call 911 immediately. 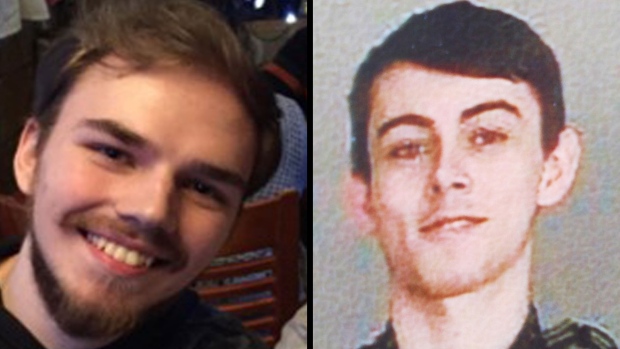