A growing number of Americans are travelling to British Columbia to get vaccinated against monkeypox in the face of scarce supplies on both sides of the border, but CTV News has learned health officials have no procedures or plans to preserve domestic supply for local residents.

Identification is not required in order to avoid any stigma or barriers to getting protected against the virus, so public health insists they don’t have any firm statistics on how many Americans have rolled up their sleeves in B.C. But they know they’re coming and that the province’s don’t-ask-don’t-tell approach is contributing to a surge in demand from non-citizens.

CTV News asked to speak with public health officers on so-called “vaccine tourists” who’ve been swapping tips online on how to get vaccinated in Canada and raving about how easy it was, but were refused by Vancouver Coastal Health, while Fraser Health did not provide any information at all.

In an email, Vancouver Coastal Health confirmed that “in the past week, as news on social media and traditional media highlighted B.C.'s low-barrier vaccine campaign, local monkeypox vaccine clinics began to report an increasing number of U.S. residents booking appointments and travelling to B.C. for the express purpose of receiving vaccine.”

While they are discouraging Americans from coming here to get vaccinated, writing that “people who travel from outside Canada to Vancouver Coastal Health vaccine clinics will not receive the monkeypox vaccine,” a spokesperson admitted there is no process to verify citizenship and that no one will be refused if they say they meet the criteria. 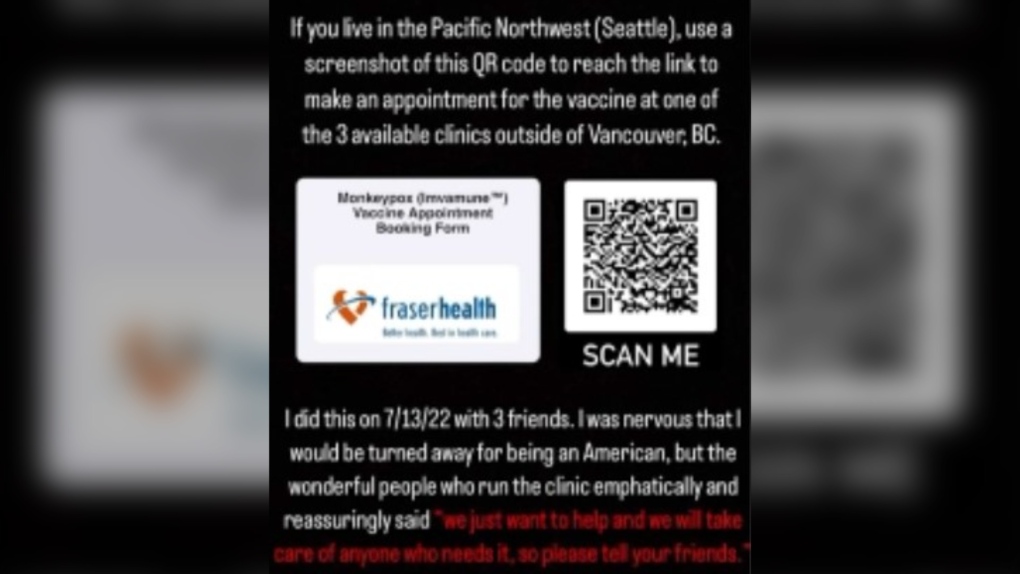 Social media users have been sharing information on how Americans can obtain a monkeypox vaccine by crossing the border into B.C. (Instagram)

LIMITED ELIGIBILITY DUE TO SCANT SUPPLY

Those showing up at B.C. clinics have been accepted for the single-dose Imvamune vaccine as long as they identify as a man who has sex with men, works in the sex trade, has had or is planning to have two or more sexual partners in the past three weeks, or has had a bacterial STI diagnosis in the past two months. No one is required to provide identification to destigmatize the process and avoid disclosure of sexual activity impacting someone’s decision to be immunized against further spread of the virus.

Some 12,000 doses of the vaccine have been administered in the province as of Wednesday morning, and there had been a special blitz to vaccinate as many men as possible during Vancouver’s pride events in late July.

Eligible members of the 2SGBTQ+ community can stop by the Vancouver Coastal Health tent from 1 p.m. to 6 p.m. and receive a vaccine.

There has not been a spike in lab-confirmed cases since then. So far, 85 cases have been reported in British Columbia, all of whom have been men who have sex with men, but around the world there have been some cases outside of that demographic.

Symptoms typically begin with fever, headache, muscle pain, fatigue and swollen lymph nodes, with the characteristic sores or blisters starting between one and five days after that. Contact with the sores is not required for infection and contaminated sheets or bedding are a risk, as is close physical contact, whether it’s sexual or not.

THE IMPORTANCE OF VACCINATION

Some of those infected describe monkeypox causing the “worst pain” in their life. No one has died in Canada from the virus and there have been 1,008 lab-confirmed cases so far nationwide, nearly all in men who have sex with men.

Canada only has 80,000 doses of the smallpox vaccine being used to immunize against the virus. While the U.S. has just decided to split doses five ways in an effort to vaccinate more people, no such announcement has been made here, meaning each dose is important in establishing “ring vaccinations” to keep infections from spreading to the general population.

It’s within that context that B.C. health officials write, “we cannot guarantee vaccine to those visiting the province for the purpose of being vaccinated,” which is hardly the kind of message that’ll discourage Americans or protect the province’s scant vaccine supply.