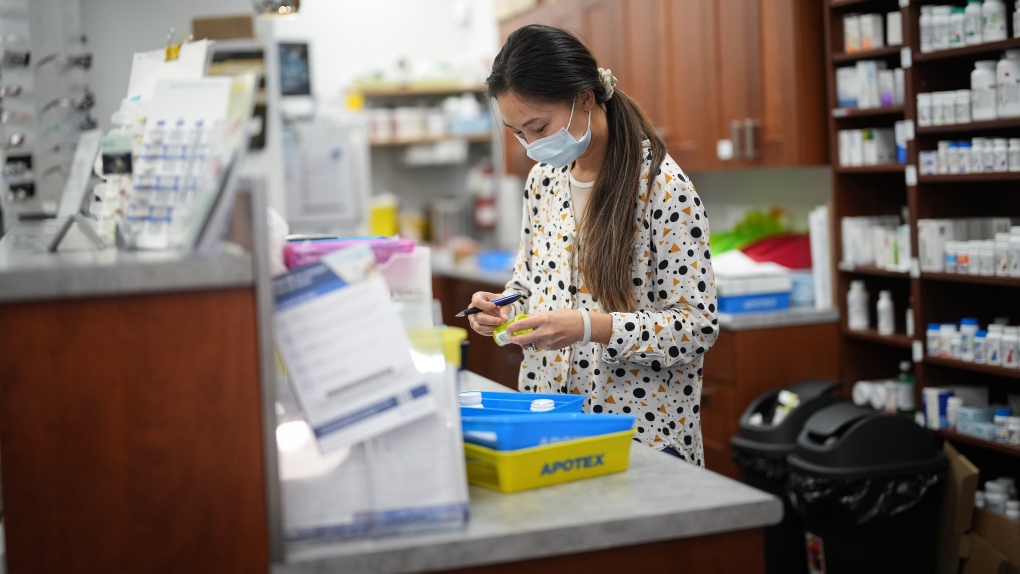 Pharmacist Cathy Wang works at the 360Care Denman Pharmacy in Vancouver, B.C., Monday, Oct. 3, 2022. Starting Oct. 14, B.C. pharmacists will be able to administer more vaccines and renew prescriptions for up to a two-year period for people whose family doctors have retired or left their practices. THE CANADIAN PRESS/Darryl Dyck

Pharmacists in British Columbia are welcoming an expansion of their powers to prescribe drugs and give vaccines, but they also say that how the changes are implemented will matter.

“It's a very exciting day for us,” she said, adding it will mean more access to care for patients.

Health Minister Adrian Dix announced the expansion last week as part of a plan to address human resource challenges that are contributing to an ongoing health-care crisis.

Starting Oct. 14, B.C. pharmacists will be able to administer more vaccines and renew prescriptions for up to a two-year period for people whose family doctors have retired or left their practices.

Next spring, they will begin prescribing drugs for minor ailments like urinary tract infections and allergies, as well as contraception.

The changes bring British Columbia in line with guidance from Health Canada and other provinces. Alberta gives pharmacists more leeway, including allowing them to administer things like cosmetic injections and order lab work, while Ontario was the last province before B.C. to empower pharmacists to issue prescriptions for minor ailments.

As the changes are rolled out, B.C. pharmacists said the smoothness of the transition will depend on the reimbursement model, staffing supports and whether there's an added administrative burden.

Like many health professionals, pharmacists have faced burnout and labour shortages since the COVID-19 pandemic began.

A survey of 1,399 pharmacists and pharmacy technicians early this year commissioned by the Canadian Pharmacists Association found almost all pharmacy professionals - 92 per cent - reported being at risk of burnout. Nearly half report abuse or harassment from patients on a weekly basis.

“The unrelenting demands, coupled with added administrative burdens and staffing challenges, have pushed us to a tipping point,” chief pharmacist officer Danielle Paes said in a statement when the survey was released in May.

As an independent, Wang said she has some control over the workload, but she said she'd like to see supports in place to protect others from unreasonable demands.

At the same time, she said expanding the scope of pharmacists may actually help with retention. It's been discouraging for some pharmacists not to use their skills and training to their full potential, she said.

“There's actually a lot of young practitioners who have left the profession because there's not enough reward. There's a huge gap in what we learn in school, in terms of clinical practices,” Wang said.

“I think, in short, there may be a little bit more workload but it will probably increase the morale.”

Wang also said she'll be keeping an eye on the reimbursement model. Currently, when doctors give an injection, they receive a fee for service, she said. Unless the government supports the same for pharmacists, the costs may be passed on to patients, she said.

In a submission to the B.C. government ahead of Budget 2023, the Neighbourhood Pharmacy Association of Canada proposed a professional services fee of $20 per assessment, which it said is in line with other provinces with remuneration frameworks. In Saskatchewan, it estimates that every $1 invested in the program saves the health-care system $2.53.

The association estimates B.C. pharmacies could assess about 60,000 minor ailments a year for $1.2 million.

A pharmacist working in the Fraser Valley, who wished to go unnamed because he didn't want to put his job at risk, said he supports the changes but hopes they don't come with too much extra administrative work, which already involves one to two hours per day.

“We already have a lot of filings that we have to do behind the scenes,” he said.

Giving COVID-19 and flu shots has added extra work, he said. However, the bigger concern is the need to report data through a provincial portal that is cumbersome, taking more than 15 minutes per patient, he said.

“The COVID shots and this year's flu shots, they changed the whole system. That is definitely a little bit more pressure to us,” he said.

However, the pharmacist said it's overall positive to expand the scope of pharmacists to better use their skills and training.

It should also help reduce bottlenecks, like when a patient asks for a refill and the pharmacist has to contact the doctor - a process that can take one or two days, he said.

The COVID-19 pandemic gave pharmacists the opportunity to step up and show their value, he said. The new changes mean they'll continue being able to help relieve pressure on other health-care providers and ensure continuity of care.

“We feel it's a long time coming,” he said. “There's a few of us who have always been advocating for it.”