Shane Thomson and his 15-year-old daughter Layla are holding onto memories of their two horses after a tragic loss. Both animals were found dead early Sunday morning in Chilliwack after a lightning storm overnight.

“They Iived together, side by side. I mean, you know it’s kind of like losing ... my kid,” Thomson said. “It’s just pretty tough.”

Thomson said when his daughter came to check on the horses Sunday morning, she found her horse Conrad lying lifeless in his covered enclosure, with a strange pattern of lines and streaks on parts of his body.

“Conrad had some marks down his neck and on his hindquarter,” Thomson said.

“She had some marks underneath her chin,” Thomson said.

“There’s no actual marks around the area to see where it hit, but you know it could have carried from anywhere.”

The father and daughter are both involved with barrel racing, and often competed with their horses, who they got around the same time in 2014. Layla described Conrad as a playful and gentle horse, who they nursed back to health after getting him as a "rescue."

“He was thin and skinny,” Layla said. 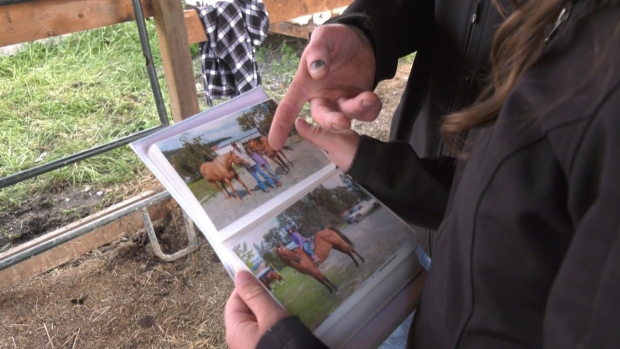 Megan McKay with Canadian Barrel Racing is also a good friend of the family. She said Thomson called her Sunday morning after they found the horses.

“I was shocked. I was absolutely shocked. My heart sank,” McKay said.

McKay said Thomson and his daughter are a big part of the racing community and attend every event together.

“They’re just such great people," McKay said tearfully. "They’re so helpful to everybody else, so I just want everybody to step up and help them."

Canadian Barrel Racing is holding a raffle to raise money for the family.

“The funds will go to Shane and Layla, to help them, you know, maybe find new companions in the future when they’re ready to do that,” McKay said.

An online fundraiser has also been set up with a $5,000 goal.

Thomson and his daughter are grateful for the support.

“I would just like to thank everybody,” Thomson said.

They still plan to attend the racing finals next week, though this time, it won’t be the same.