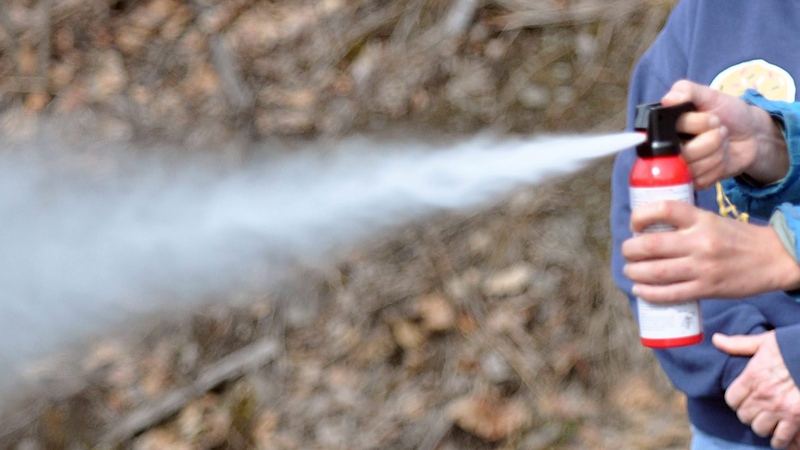 A woman tries out a can of inert bear spray during a presentation by the Alaska Department of Fish and Game on good bear safety habits at the center in Eagle River, Alaska, on Sunday, April 15, 2012. (Alaska Star, Matt Tunseth)

PENTICTON, B.C. -- Mounties in Penticton, B.C., say they got quite an eyeful last week after a man peeled off his clothes and began washing himself with milk after inadvertently spraying bear spray down his pants.

"He was in excruciating pain and vigorously using his shirt to scrub his genitals with homogenized milk in an attempt to relieve the pain," said Wrigglesworth.

The man told police he had been attacked by three unknown men, but Wrigglesworth said an investigation revealed the spray pattern "was consistent with the alleged victim carrying his own can of bear spray and it went off unintentionally."

He said the victim then became uncooperative.

Later that night, police were called to a home and found five people outside rolling on the ground after they, too, were hit with bear spray.

Wrigglesworth said the five were also uncooperative, but told police they were attacked over a debt.