VANCOUVER -- While videos of crowded Vancouver beaches have gone viral, the summertime increase in COVID-19 cases in B.C. is being attributed largely to private indoor gatherings.

“So far, we have no outbreaks that we think started or mainly happened outside, whereas we have lots that happened inside at parties and bars and restaurants and inside people’s homes,” said Caroline Colijn, an infectious disease modeller at Simon Fraser University.

“We’ve had, and Dr. (Bonnie) Henry spoke to this yesterday, individual parties where dozens of people have gotten sick from COVID-19,” said Health Minister Adrian DIx.

“What’s happening is people are having private parties, they’re going, they don’t know everyone there. Sometimes alcohol is involved. And that means the potential for people to get sick is greater.”

Colijn says if that behaviour doesn’t change, things will get a lot worse in the fall.

“We would expect an increase in contact associated with schools, and that would contribute to an even faster rate of growth,” she said.

Her forecast models show a huge spike of cases in B.C. through September and October, but the curve could be less dramatic if changes are made.

“I think right now is the time to stop community transmission as much as we possibly can,” said Colijn. “If we want to open schools safely in September, we need kids going into those schools not to have been exposed in these coming weeks.”

She’d like to see all levels of government immediately open more outdoor space for people to gather.

“One of the things we need to do is get people to socialize outside because that’s one of the safest ways we know how to socialize,” she said. 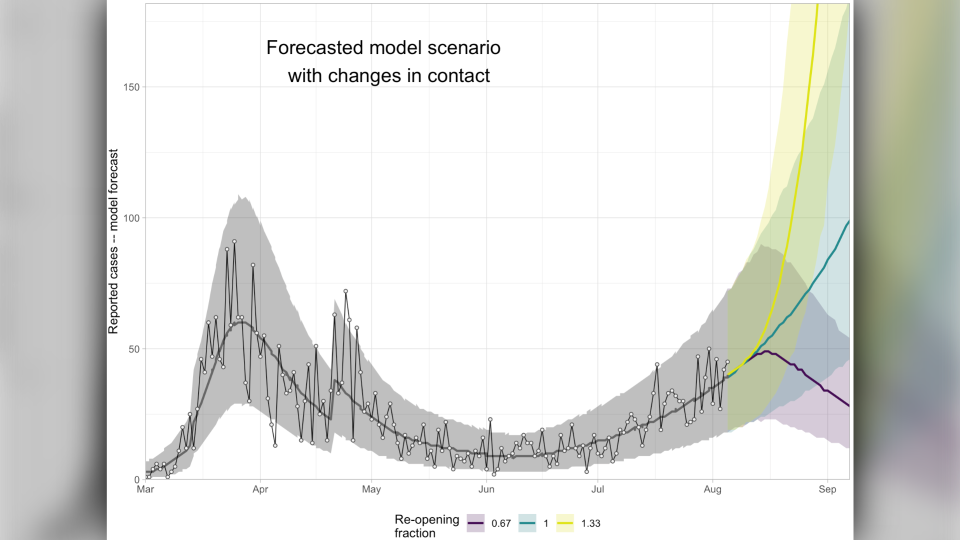 Dix is encouraging people not to host large gatherings. And for those invited to one? “If you’re considering going to a party, get the information you need. How many people will be there, how will distancing be established, who is going to be there, do I know all of them, are some of them vulnerable?”

And if it sounds like the gathering won’t be COVID safe, Dix says “there has never been a time when saying no to a party is easier.”