'I thought they were going to kill me': Airport worker says he was beaten over denied smoke break 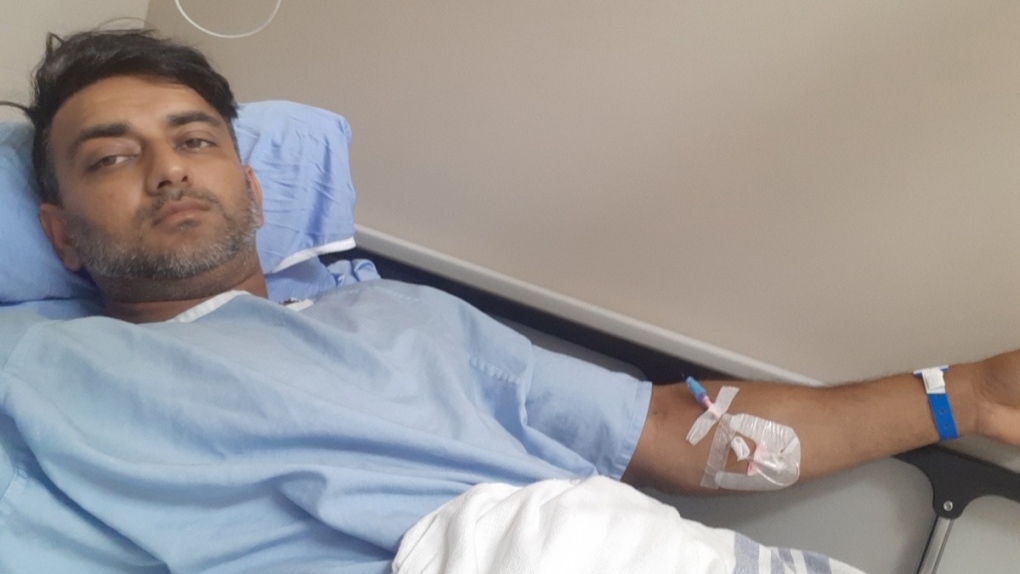 Amit Prasad is seen in this image from his GoFundMe page.

A worker at Vancouver International Airport says he was swarmed and beaten by six men as he left work early Monday morning.

Amit Prasad spoke to CTV News from his hospital bed Friday, where he says he's recovering from three fractures in his spine and one in his face.

“The pain was so bad I screamed,” said Prasad. “I thought they were going to kill me, so I had to fight back … They kicked me in the back, and I fell to the ground. I fought back and then they ran away.”

He is part of the ground crew that handles luggage and tows planes in and out of gates at YVR. His employer, Strategic Aviation Services, independently confirmed the attack to CTV News.

“At approximately two o’clock in the morning, one of our employees at Vancouver International Airport was a victim of assault that took place on airport property," said Jeffrey Hendren of Strategic Aviation.

Prasad said he recently denied a subordinate a handful of smoke breaks.

“We have ups and downs at the airport, and it was a very busy time”, he said. "I would say no because it's busy and it's not fair for the other guys."

His wife, Perleen Lal, said she was shocked when she learned about the brutal attack.

"This should not have happened. Work is a place where we should feel safe and something like this is just heinous," she said.

In a statement, YVR said it is working with Mounties and does not believe the public is at risk.

“The safety of our employees, passengers and partners is our number one priority," YVR's statement read.

Richmond RCMP told CTV News they responded to an assault in progress and intercepted a suspect vehicle as it fled the scene. Another suspect was arrested in Surrey. Investigators said the 20 year-old is known to police, adding that additional arrests may be forthcoming.

Prasad, a father of four, said he recognized at least one of the attackers and managed to give a licence plate number to police.

He said his focus isn't on the investigation, but rather healing so he can return home and continue to work.

Lal said their children cannot wait to have their father back at home.

"We want him home – his kids want him home. They want to be with him. They miss him and they cry for him every day," she said.

He has now started a GoFundMe page.

“I'm the only working person in my family,” it reads. “Thank you once again for your love and support from me and my family."