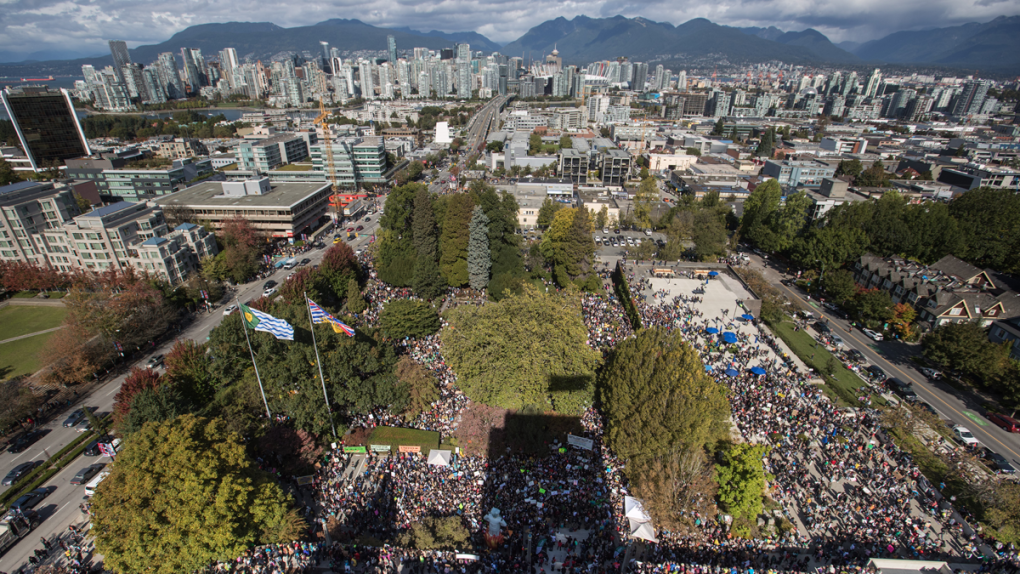 Thousands of people gather outside Vancouver City Hall before marching downtown during a climate strike in Vancouver on Friday, Sept. 27, 2019. (Darryl Dyck / THE CANADIAN PRESS)

VANCOUVER - Environmental group Stand.earth has analyzed the climate plans of four Canadian political parties and has determined that none of them do enough to avert the worst impacts of climate change.

But it says the Green proposal lacks specific details and doesn't clearly state that most of Canada's fossil fuel reserves must stay in the ground.

New Democrat plans for emission reductions are described as aggressive, but the group says there's little detail about carbon pricing or policies that would shift the country away from oil and gas expansion.

The report says a Liberal "net zero" emission target by 2050 is ambitious but "simply won't get the job done," while the Conservative policy tries to "trick climate-concerned citizens into believing they are taking action on greenhouse gas emissions."

Tzeporah Berman, international program director at Stand.earth, says at this moment in history, we need leaders who will put in place an exit plan to stop the expansion of the oil and gas industry, implement a just transition by scaling up cleaner and safer jobs, and diversify our economy.

This report by The Canadian Press was first published Oct. 9, 2019.