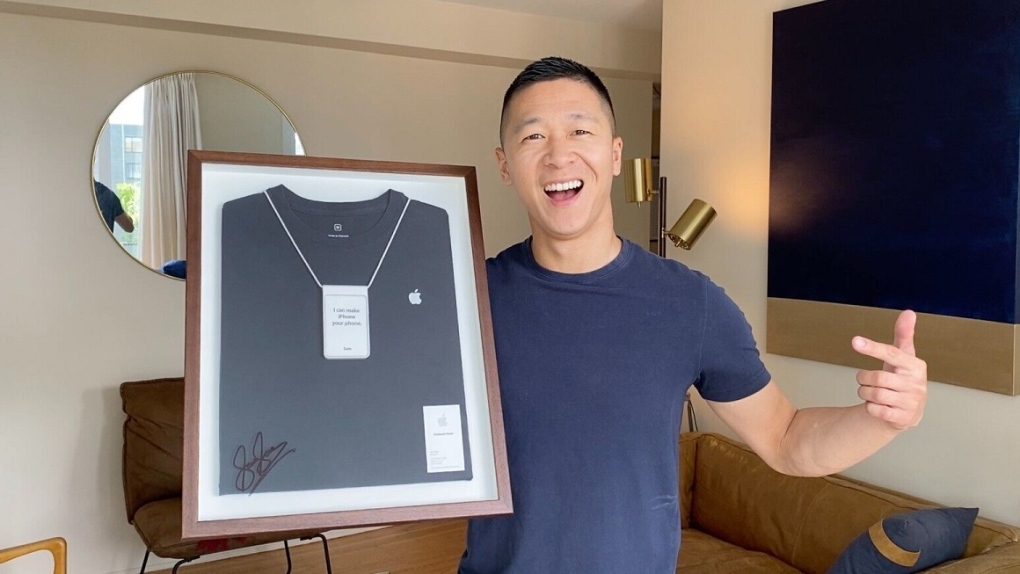 A former Apple employee in Vancouver named Sam Sung is auctioning off another old business card nearly a decade after the first one fetched thousands of dollars.

A former Apple employee in Vancouver named Sam Sung is auctioning off another old business card nearly a decade after the first one fetched thousands of dollars.

He first made headlines in 2012, when photos of his business card from the Apple store at Pacific Centre circulated online. It went up for auction in 2014, fetching US$2,500, which is just over $3,200 Canadian. The money was then donated to the Children's Wish Foundation.

Now Sung — who has since changed his last name to Struan for professional reasons — is hoping a business card from the first store he worked at in Scotland will bring in some cash for another important cause.

Struan plans to donate the proceeds from the latest auction to the Downtown Eastside Women's Centre, which aims to provide a safe space for women and children living in Vancouver's most vulnerable community.

In a news release, Struan said he was unaware a card from the Glasgow Buchanan Street store still existed until recently, when a family member came across it and mailed it to him.

"One of my family members found my business card from my first job," he said. "Given the unexpected success I had a few years ago, I thought I would try my luck one more time and bring some funds and awareness to another great cause."

As of Friday afternoon, the card — along with an Apple T-shirt and his former lanyard — is sitting at $530 on eBay, with four days left on auction.

Struan just hopes the card will land in the right person's hands.

"I hope this card goes to another fellow Apple enthusiast who has the desire to donate to a good cause."

Rescue crews waded through flooded streets and used boats Thursday in a scramble to save people trapped after Hurricane Ian destroyed a cross-section of Florida and brought torrential rains that continued to fall. The destruction began to come into focus a day after Ian made landfall in Florida as one of the strongest hurricanes ever to hit to the U.S.

The family of an Indigenous woman who was mocked by staff as she lay dying in a Quebec hospital in September 2020 has filed a lawsuit seeking nearly $2.7 million.

Gas prices jumped overnight in some cities across Canada by as much as almost 20 cents.