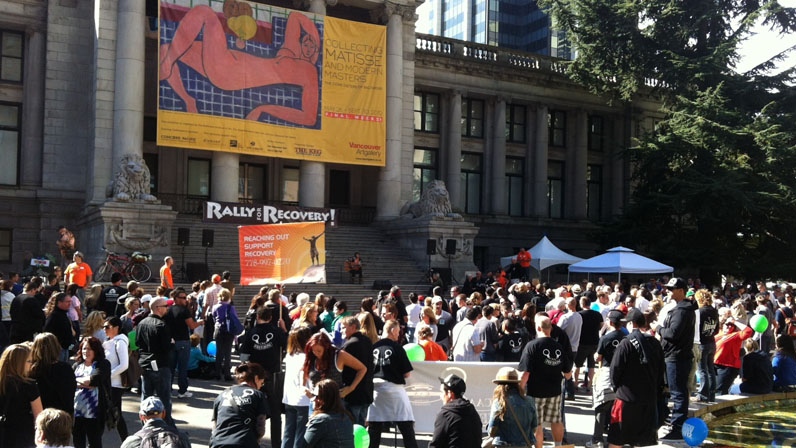 People gathered at the Vancouver Art Gallery in support of drug recovery programs on Sept. 30, 2012. (CTV)

Hundreds of recovering drug addicts gathered at the Vancouver Art Gallery Sunday afternoon to inspire addicts who have yet to seek treatment and to push the provincial government to support more addiction recovery programs.

Carrying signs saying “recovery saved my life,” and wearing sweaters marked with the word “sober,” the crowd listened to speakers tell personal stories and then marched along several downtown streets.

“The message is: recovery works,” said rally organizer David Berner. “If you or someone in your family is in a disaster of addiction and alcoholism, get yourself to a program because millions of people are cleaning up.”

Right now various levels of government and health authorities fund a variety of shelters, detox and addiction treatment beds, as well as harm reduction programs such as Insite, the supervised injection site. The province spends about $1.3 billion on mental health and substance abuse each year.

Agencies like BC Housing offer top-up money to recovery houses as well, and many houses use the funding offered through the housing portion of a welfare cheque to pay for programs.

But that system still leaves out many good programs that have made a difference in people’s lives and could do more, said outreach worker Jim O'Rourke.

“No one treatment plan will work for everybody,” said O’Rourke. “But every person that was here found a way to get clean and sober.”

BC Liberal MLA Randy Hawes took to the steps of the art gallery with his son Darren, who said he had suffered through a cocaine addiction for almost twenty years. Darren has been sober for three years, Hawes said.

“If you have a son or a daughter that falls into an addiction, as a parent the first thing you do is start questioning yourself. The feeling of guilt is all-encompassing,” he said.

The family was close to throwing Darren out of the house before his family realized what was happening. Soon Darren was in Baldy Hughes recovery house in Prince George, and began the long road to recovery, Hawes said.

“It’s wonderful to have my son back,” said Hawes, who said that while he was supporting his son he learned more about the addiction treatment models in the province.

“We need to take a darn good look at the money that we’re spending on addictions in BC. Start looking at the addict as a person and say what do we need to do to help you stay clean and sober,” he said.

Hawes said he and four other MLAs, Kash Heed, Joan McIntrye, John Slater, and John Rustad, are embarking on a trip around the province to learn more about other treatment options.