Fire alarm pulled during demonstration against trans speaker at UBC 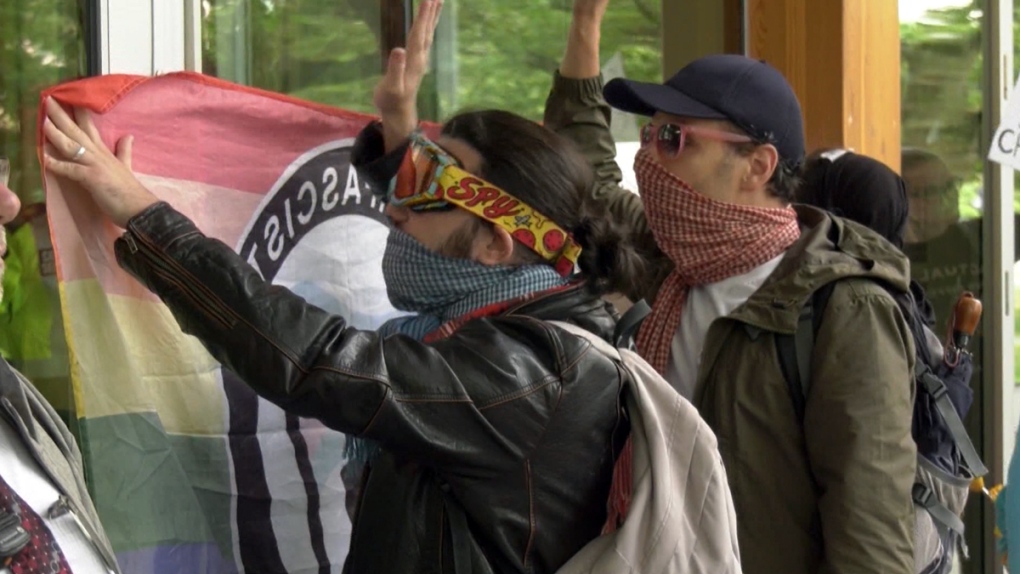 Protesters bang on the windows of a building at UBC where a controversial talk from Jenn Smith was scheduled to be held Sunday, June 23, 2019.

Tensions erupted at the University of British Columbia Sunday evening during a speaking event featuring an Okanagan man.

The speaker, Jenn Smith, has been accused of promoting transphobic hate speech, and some post-secondary institutions have opted to cancel it altogether.

UBC went ahead with the talk despite opposition, citing freedom of speech.

"We believe selectively shutting down conversations on complex and challenging topics undermines that crucial foundation of academic freedom," the school said in a statement.

On Sunday night, protesters tried to disrupt Smith's talk, which he described as an analysis of policies and programs that "jeopardize some of the most important rights and freedoms in our society."

A fire alarm was pulled, forcing the evacuation of the building. Campus security and firefighters were called to the scene.

Demonstrators said they were disappointed the university allowed the event to go ahead.

"As a queer woman of colour, I feel violated and I feel in danger on my own campus," one protester told CTV News.

"We feel not safe having this person where who also has ties to the far right."

Titled "The Erosion of Freedom," the public talk is sponsored by the Canadian Christian Lobby and appears to include topics such as the "shut down" of opposition to official government policies.

Smith, who is a transgender man, has been critical of initiatives including B.C. schools' sexual orientation and gender identity program.

SOGI 123 was designed to support LGBTQ students through inclusivity initiatives and to provide educational resources for teachers, and demonstrators were worried about the spread of misinformation.

But Smith said the suggestion of transphobia is unfair.

"I do not promote hatred. I am transgender identified myself. I've been bisexual myself most of my life," he said.

"Why would I be promoting hatred of the community? It's absurd."