Drug law used to take away cars of drunk drivers 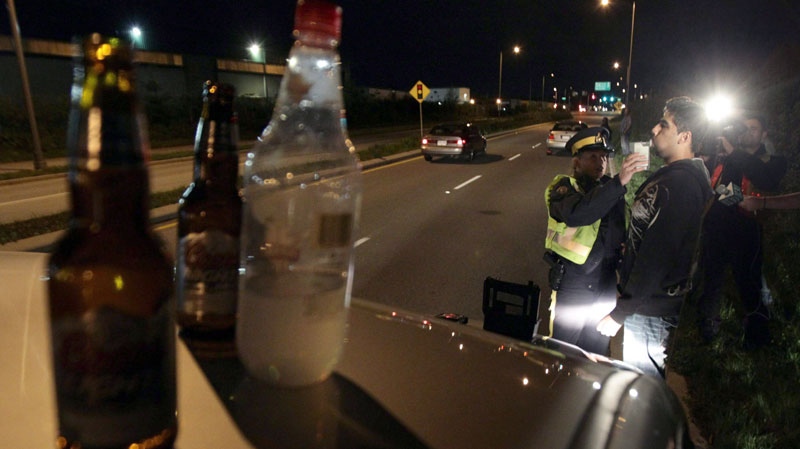 Open bottles of alcohol found in a motorist's car sit on the vehicle as RCMP Cnst. Kim True conducts a breathalyzer test on the driver during a roadside check in Surrey, B.C., just before midnight on Friday, Sept. 24, 2010. (Darryl Dyck / THE CANADIAN PRESS)

Police on Vancouver Island are combating impaired drivers through the clever use of legislation usually employed to strip drug lords of their assets.

The Victoria Police Department says it seized cars from two drivers accused of repeat impaired offences after details of both cases were referred to B.C.'s Civil Forfeiture Office.

The Civil Forfeiture Act is usually used to grab the proceeds of crime, such as luxury cars linked to marijuana grow-ops, but the province now owns a 1993 Honda Accord and a 1996 Chevrolet Suburban after police say the Act was used for the first time to scoop up vehicles allegedly involved in repeated impaired driving incidents.

The Accord was seized from 30-year-old Victoria resident Steven Henry after police accused him of several recent impaired driving offences, just weeks after he got his licence back, following a 10-month suspension for two drunk driving convictions last year.

Sixty-three-year-old Anthony Raymond of Saanich was convicted of impaired driving in November 2009 and gave up his Suburban after officers stopped a suspected drunk who had prompted numerous 911 calls about a reckless driver.

Solicitor General Shirley Bond says B.C. law allows a judge to order vehicles forfeited if they have been used in a way that endangers lives.

Have your say: What do you think of these forfeitures?