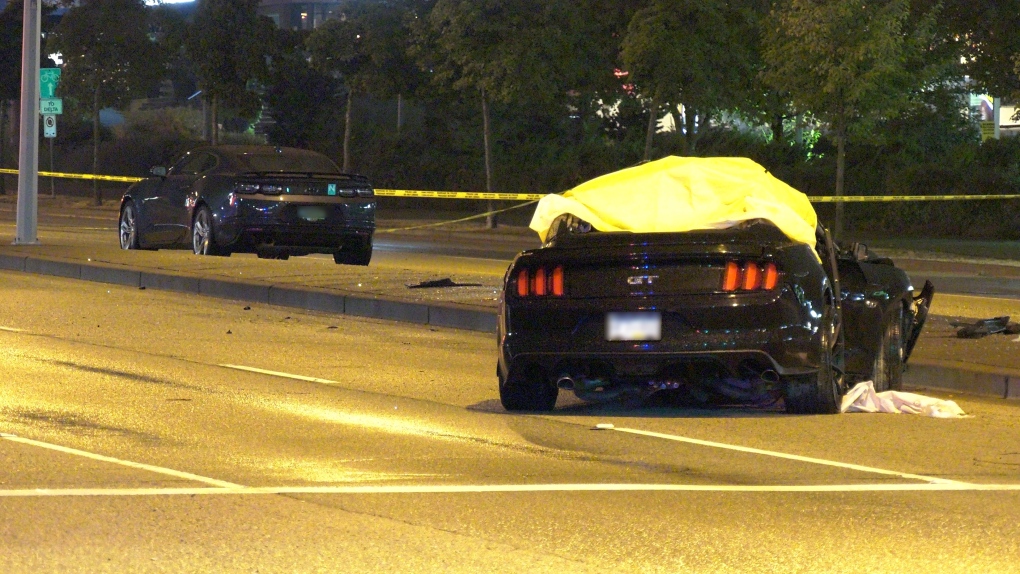 A black Mustang is seen covered with a tarp following a fatal accident on Nordel Way in Surrey on Sept. 8, 2019.

Two days after a deadly crash in Surrey, police are asking anyone who saw the cars involved prior to the accident to come forward.

Authorities said a black Ford Mustang GT lost control on Nordel Way early Sunday morning, causing it to collide with a grey Chevrolet Camaro and then slam sideways into a hydro pole.

A man in the passenger seat of the Mustang was fatally injured, and died at the scene. His identity has not been released, but police said he was in his 20s.

On Tuesday, the RCMP said investigators believe there are people who witnessed the crash who haven't spoken to police, and others who may have spotted the Mustang and Camaro in the lead-up to the accident.

"We are not only seeking to speak to people who saw the impact of the collision, but anyone who may have seen the vehicles involved driving prior to the collision," Cpl. Elenore Sturko said in a news release. "We are also asking for any available dash-cam or cell phone videos."

The Mustang driver was seriously hurt but survived, and the two people in the Camaro suffered only minor injuries.

The cause of the accident, which happened east of 120 Street, hasn't been confirmed, but the roads were wet at the time. The crash happened at around 1:15 a.m., around the time that a brief thunderstorm rolled through Metro Vancouver.