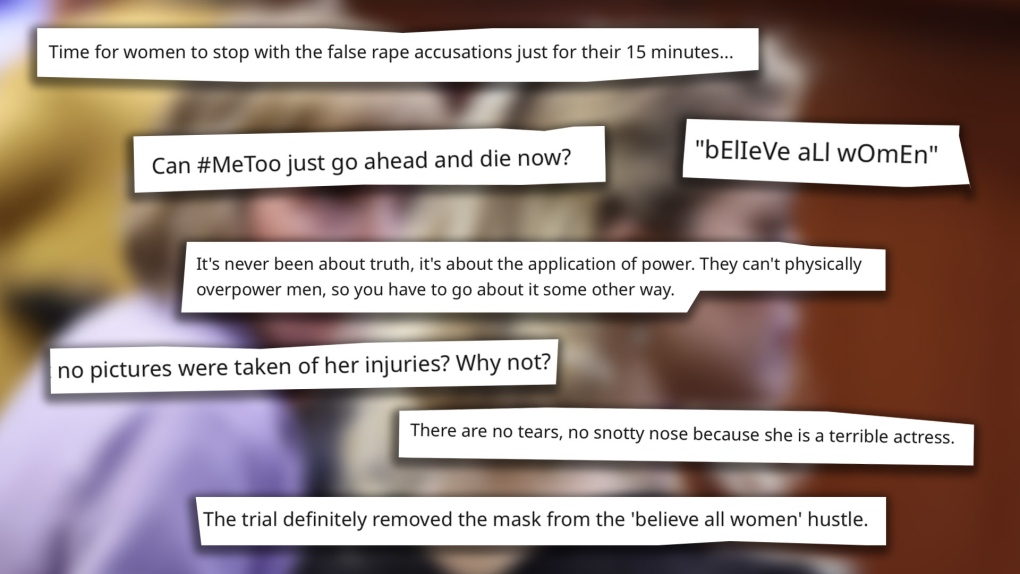 Some of the discussion around the Depp-Heard trial on social media sites has concerned advocates for domestic violence survivors. (Graphic illustration by CTV News. Background image of Amber Heard from Evelyn Hockstein/AP)

Like many people, Angela Marie MacDougall spent the last several weeks observing the rare public spectacle that was the defamation trial between Johnny Depp and Amber Heard.

As executive director of Battered Women's Support Services in Vancouver, she knew the outcome and the discourse surrounding the case would have an impact on her work.

"How could it not?" said MacDougall, who watched the trial unfold for hours on mornings, evenings and weekends.

Because of the judge's decision to allow the proceedings to be televised, the salacious details and shocking accusations coming from both sides became social media fodder in real time. Many fans of Depp's, who vastly outnumbered Heard’s prior to the trial, were gleeful in their skewering of his accuser, long before the non-sequestered jury found both parties liable for defamation.

MacDougall said the tone of some of the online discussions has not been lost on survivors of domestic abuse.

"What they're seeing is an increased level of misogyny online," she said. "There's a concern that perhaps they – survivors – will not be believed."

While the #MeToo movement helped increase cultural awareness around abuse and harassment, MacDougall said the dial hasn't moved as far as some fringe groups believe – and the commentary around the Depp-Heard case, which has seen many people trotting out old myths and stereotypes about how survivors are supposed to behave, has left some advocates worried that a long-brewing pushback is underway.

"It does seem like we're seeing a backlash to the #MeToo movement, which was all about carving out space for survivors for healing and empowerment and community, through sharing their stories and advocating for change," said Kate Feeney, a lawyer with West Coast LEAF, a non-profit working to advance gender equality through the courts.

"There's no doubt this discourse is going to be really frustrating, and demoralizing, and ultimately silencing for survivors."

MIXED REACTIONS TO THE TRIAL

Many of the people supported by Battered Women's Support Services are too focused on their own lives to have taken much notice of the trial, MacDougall said – "They're trying to survive, they're trying to feed their children" – and some who have been watching don't identify with Heard, or don't see their experiences reflected in hers.

But advocates fear what longer-term effects the ensuing wave of online commentary could have on people living in dangerous situations. That could include abusers weaponizing the widespread mockery of Heard to discourage victims from coming forward.

"Abusive partners will take this situation and use it as leverage to get more power," MacDougall said.

So far, her non-profit has not seen a decrease in calls for service; volunteers and staff still respond to anywhere from 35 to 55 requests daily through the BWSS crisis line.

The organization provides counselling and victim services, and puts survivors in touch with legal help. MacDougall noted they are currently supporting multiple women who are facing defamation lawsuits over their own abuse allegations.

THE RISK OF SPEAKING OUT

Defamation claims are handled differently in Canada and the U.S., and even between different provinces or states, but the Depp-Heard coverage familiarized many people with a concept that exists on both sides of the border – of SLAPP suits, or strategic lawsuits against public participation.

The lawsuits are said to be filed with the intention of pressuring critics or accusers into silence, by embroiling them in costly legal proceedings.

Some jurisdictions, including B.C. and Ontario, have introduced anti-SLAPP legislation designed to protect defendants who speak out on matters of public interest – though West Coast LEAF could not identify any cases in which Canadian anti-SLAPP laws shielded an alleged survivor of sexual or domestic violence from a lawsuit.

"So far, the potential for the legislation to offer more robust protections for survivors has not been realized," Feeney said.

Advocates note the fear of being forced into a courtroom for speaking out, either online or to friends and family, can have a chilling effect on survivors, regardless of whether the lawsuit is likely to succeed.

"They drag a survivor into a court proceeding that they have not voluntarily engaged with, and subject a survivor to a legal system which has a long history of discrediting and re-traumatizing them," Feeney said.

"The legal system is still very much oriented toward protecting people's reputations, and it continues to struggle to meet the specific needs of survivors of gender-based violence, who oftentimes have to prove violence that takes place behind closed doors."

Back in 2019, both Battered Women's Support Services and West Coast LEAF were part of a coalition of intervenors in two Supreme Court of Canada cases testing anti-SLAPP legislation in Ontario.

Though neither of the cases involved allegations of domestic or sexual violence, the organizations asked the court to consider the applications for survivors.

The Supreme Court declined, leaving the question open – for now.

"There has to be a place and a space where survivors should be able to make their experience visible," MacDougall said. "That does matter. It does matter. It is in the public interest that domestic violence isn't kept in the dark."

While the discourse surrounding the Depp-Heard trial has been disheartening for some, MacDougall stressed that there remains a dedicated community of people and organizations ready to support those who are ready to escape a difficult situation.