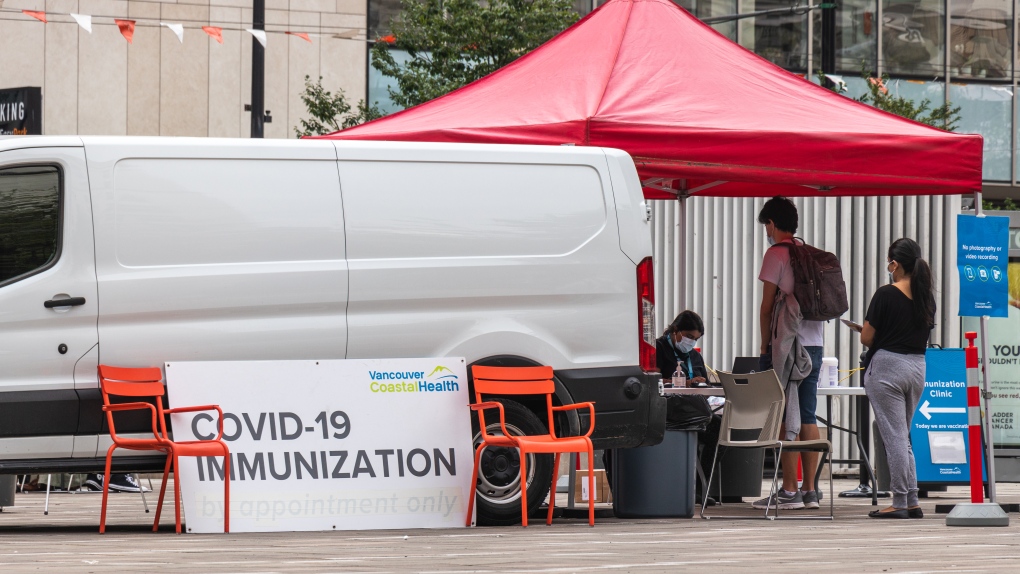 People line up to get a COVID-19 vaccine at a pop-up clinic in Vancouver. (Shutterstock)
Vancouver -

B.C. recorded 1,692 new cases of COVID-19 and 11 related deaths over the weekend, while the number of coronavirus hospitalizations topped 300 for the first time in months.

The latest numbers, released by the Ministry of Health of Monday, pushed the province's seven-day average for new infections to 643, down from 685 as of Friday.

A recent U.K. study found the Delta variant, which is now the dominant strain in Canada, could double the risk of hospitalization among the unvaccinated.

People who aren't fully vaccinated against COVID-19 continue to make up the vast majority of coronavirus hospitalizations in B.C., according to officials. Numbers shared by Health Minister Adrian Dix on Twitter show 89 per cent of current ICU patients haven't received a single dose, including all 22 of the patients who are under the age of 40.

Health-care workers have been sounding the alarm about the influx of COVID-19 patients putting strain on B.C.'s resources, as overflowing hospitals in neighbouring Alberta have left officials looking for help from other provinces.

The Ministry of Health also announced one new COVID-19 outbreak on Monday, at the Overlander long-term care facility in Kamloops. There are now 21 active outbreaks across B.C.'s health-care system, including at Chilliwack General Hospital, Fort St. John Hospital and Kootenay Boundary Regional Hospital.

Dix and provincial health officer Dr. Bonnie Henry have stressed that the best way to ease the pressure on hospitals is to get vaccinated as quickly as possible.

As of Monday, B.C. has administered 7,711,306 doses of the Pfizer-BioNTech, Moderna and AstraZeneca vaccines. Nearly 87 per cent of the eligible population age 12 and older have received at least one dose, and 79.4 per cent have received both doses.

The case numbers announced Monday were recorded over three 24-hour reporting periods: 644 were identified from Friday to Saturday, followed by 613 from Saturday to Sunday and 435 from Sunday to Monday.

The Fraser Health authority reported the highest number of cases and deaths.

Six of the people who died related to COVID-19 over the weekend lived in the Fraser Health region, according to officials. Three were in Northern Health and the remaining two lived in the Vancouver Coastal Health region.