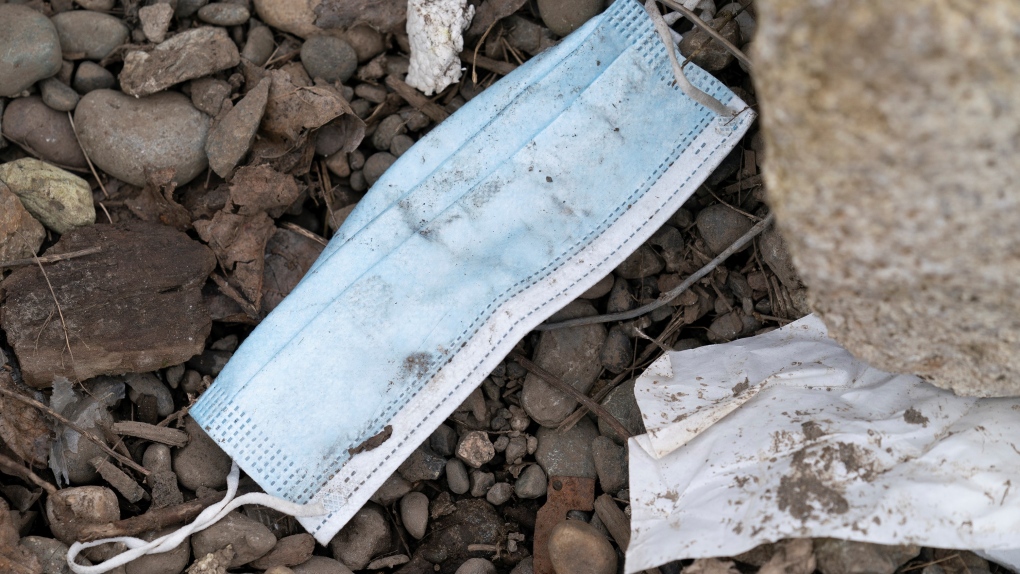 A disposable face mask is pictured on the ground in east Vancouver, Tuesday, March 9, 2021. With more people using disposable gloves and face masks to curb the spread of COVID-19, it has created more litter on city streets. THE CANADIAN PRESS/Jonathan Hayward
Vancouver -

B.C. health officials announced 749 new cases of COVID-19 and nine related deaths on Thursday, as offices around the province closed to observe the first ever National Day for Truth and Reconciliation.

Thursday's written statement from the Ministry of Health began with a message honouring residential school survivors and victims.

"The ministry and the provincial health officer and her staff are observing the first National Day of Truth and Reconciliation Day this year, encouraging employees to learn more about the history and ongoing legacy of residential schools, and to have important conversations about how to bring action to reconciliation with Indigenous peoples in B.C.," the statement reads.

The ministry's pandemic update was truncated due to the holiday, according to the statement. It did not include the number of active cases or hospitalizations. There are currently 145 infectious COVID-19 patients in intensive care units, according to the ministry.

The latest deaths occurred across all five of B.C.'s regional health authorities, with three in Fraser Health, two in Interior Health, two in Island Health, one in Northern Health and one in Vancouver Coastal Health.

Fraser Health and Interior Health saw the largest numbers of new cases on Thursday, with 267 and 157, respectively.

Northern Health had the next highest total, at 148, while Vancouver Coastal Health added 113 new infections and Island Health added 68.

The raw numbers don't account for the disparate populations of B.C.'s health authorities, however. On a per-capita basis, Northern Health had by far the largest number of new infections, with 52 per 100,000 residents.

The 749 new cases added to B.C.'s total Thursday bring the province's rolling seven-day average for daily cases to 742, a slight decrease from Wednesday, when the average was the highest it had been since May 4.

The province has been dealing with a surge in cases among school-aged children, a problem that is particularly acute in areas where vaccination rates are low, according to provincial health officer Dr. Bonnie Henry.

As of Thursday, 88 per cent of eligible people ages 12 and older in B.C. had received at least a first dose of a COVID-19 vaccine, and 81 per cent in that age group had received two doses.