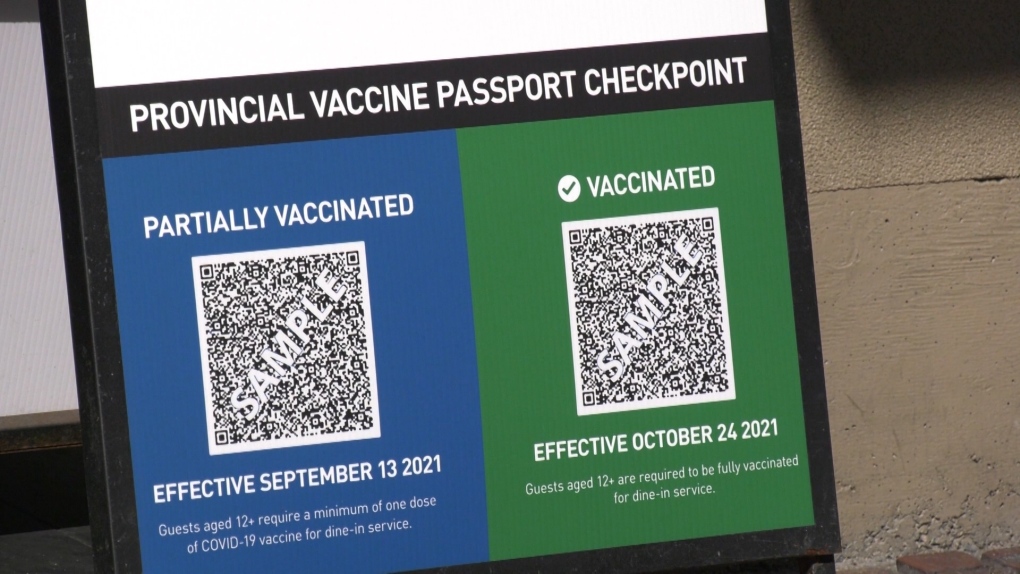 Two British Columbia women who say doctors advised them against getting COVID-19 vaccines have filed a constitutional challenge of the province's vaccine passport.

A petition filed in B.C. Supreme Court says 39-year-old Sarah Webb, who lives in Alberta and B.C., developed an adverse reaction from her first dose of a vaccine in May and ended up in the emergency department of a Calgary hospital six days later.

The court document says Webb's symptoms included fatigue, heart arrhythmias, severe pain and a rash on her arm. It says she received antibiotics but developed further complications the next day and went to another hospital, where a doctor told her she should not get a second vaccine shot.

The petition filed against the attorney general and the Ministry of Health says Leigh Anne Eliason of Maple Ridge, B.C., was told by her doctor that she should not get a COVID-19 vaccine because of the risk of side-effects due to her medical history.

The Attorney General's Ministry responded to a request for comment from both ministries and said the government has not been served in regard to the petition.

“The province and the provincial health officer fully respect British Columbians' constitutional rights and freedoms,” it said in an emailed statement.

“We are taking the steps necessary to address and mitigate the effects of the ongoing COVID-19 pandemic on all British Columbians. As the issue of proof of vaccination may be before the courts, we are not in a position to comment further.”

However, it says each of the doctors raised concerns that neither the government nor any provincial medical associations had provided guidelines on how to write such a letter or what information should be included.

B.C. residents without proof of vaccination are prohibited from certain activities like dining in restaurants and entering movie theatres and gyms. That deprives the petitioners of their charter rights, the petition says.

Provincial health officer Dr. Bonnie Henry has said anyone who chooses not to be vaccinated has options including ordering takeout from restaurants and watching movies and sports at home because her order is aimed at reducing transmission of the virus from anyone who may be infected.

Robert Hawkes, a lawyer who represents both women, said Friday that his clients don't know each other, neither is an “anti-vaxxer” and at least in Eliason's case, her husband and two children have been vaccinated.

“It creates a real hardship,” Hawkes said of cases when one person in a family can't get vaccinated and is cut off from accessing services, travelling or faces the prospect of losing their job because of vaccine mandates in the workplace.

Hawkes said his office was in the process of serving the two B.C. ministries with court documents.