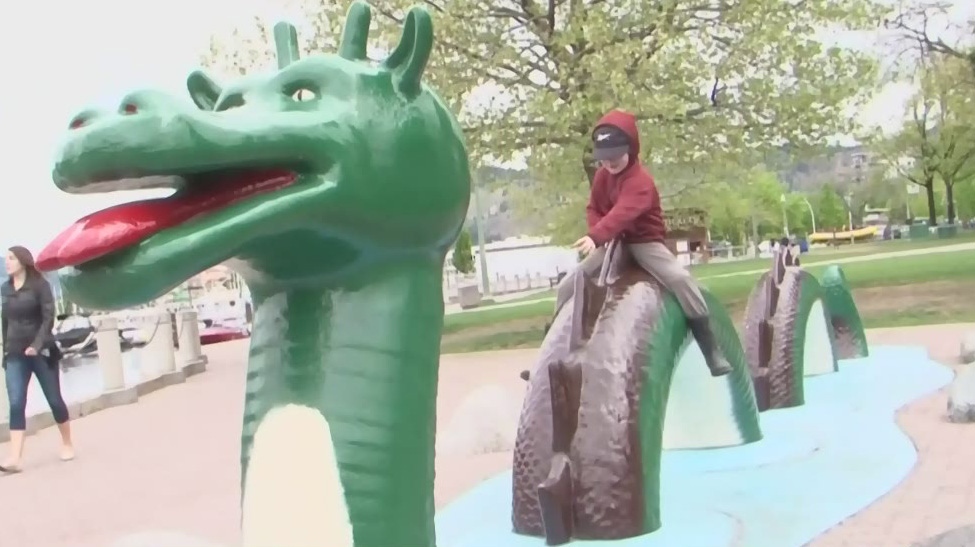 A child plays on a statue of Ogopogo in this file photo from 2016.
Victoria -

The legal rights to the legendary creature in a British Columbia lake have been transferred to an alliance of Indigenous nations who say the Ogopogo has always been part of their spiritual teachings.

Council members in the Okanagan city of Vernon voted unanimously to transfer the Ogopogo copyright it has held for 65 years to the eight-member Okanagan Nation Alliance.

Ogopogo means spirit of the lake in the alliance's Syilx language.

For $1, council voted to assign and transfer to the Okanagan Nation Alliance all copyright, title, interest and property including trademark rights arising from the commercial and non-commercial use of the Ogopogo name.

Okanagan Indian Band Chief Byron Louis was not available for comment, but Okanagan Nation Alliance administrator Pauline Terbasket, who signed the copyright documents, said the transfer was “important” for the nation.

The councils representing Vernon and the Okanagan Indian Band meet monthly to discuss issues between the two governments, the mayor said.

Indigenous legend says the Ogopogo inhabits Okanagan Lake, which at 135 kilometres long and depths of more than 230 metres, touches the cities of Penticton, Kelowna and Vernon.

Tourism Kelowna says on its website that stories about a lake creature date back thousands of years to area Indigenous Peoples who spoke of N'ha-a-itk, the spirit of the lake.

“Stories of N'ha-a-itk changed over the years as European settlers transformed the stories they heard into a creature, which later became known as Ogopogo and the purported sightings over the years continue to strengthen its legend,” says the website.

Tourism Kelowna says photos and sightings of Ogopogo have so far been inconclusive.

A statue of a green, serpent-like figure resembling what may be an Ogopogo is located in downtown Kelowna near the lake shore.

“Some say its head looks like a horse, while others say it's reptilian or goat-like,” says the website.

This report by The Canadian Press was first published Oct. 16, 2021.