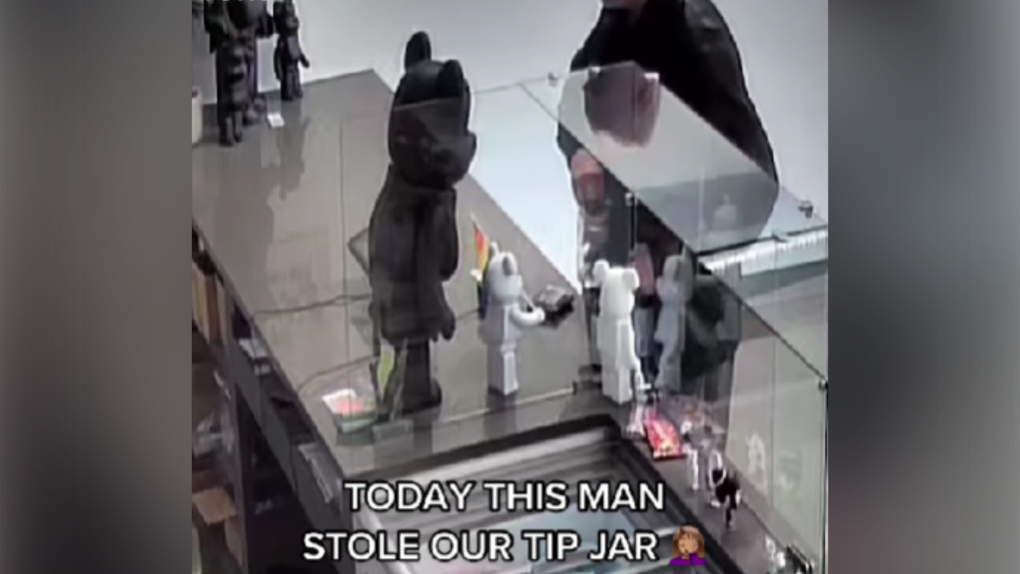 This screenshot from an INstagram post by Hype Chocolate Co. shows the moment the owner says a man took the tip jar from the counter.

The owner of an East Vancouver ice cream shop posted video of a man apparently stealing the tip jar off the counter as a warning for other businesses – but didn't expect it to get the response that it did.

The man appeared to be browsing at first but when he came up to the till his behaviour seemed a little strange and he asked her to get him something from the other end of the shop.

"It was obvious to me that it was to distract me and get me away from my till," she said. "I literally turned around for one second to call my employee up to the front so I wasn't alone at the front of the store. In that time, my tip jar had disappeared."

The man was, according to Pincott, wearing a very large coat and she suspected he was hiding the fairly big jar underneath it. When she asked him if he had taken it, he was angry at being accused.

"We're never trying to be confrontational with anyone because things can escalate quickly. We let him walk out of the store and then my employee and I followed him out and just recorded the back of him. And then I pulled my surveillance tapes and we had a full profile," she said.

"I feel a little unsafe because I don't know if this person plans to come back. We strive to be a family friendly store and we have a lot of children in here. It's kind of it's almost hard to describe how I'm feeling because I do have a lot of anxiety around it."

Pincott estimates there would have been between $20 and $40 in the jar but says the amount of money is not her main concern. Since posting to Instagram and TikTok, Pincott says she's heard from other store owners who are pointing out the similarities between what happened at her store and a caught-on-camera tip jar theft from West Vancouver pastry shop last month. A café in White Rock and a bakery on Vancouver's Commercial Drive also commented on the post, saying the man bears a striking resemblance to the person who has stolen from their counters.

"It was pretty alarming," she said, adding she has watched the video from the West Vancouver incident and read the posts from the other businesses.

"I honestly don't know what consequences he has faced but the fact that he still seems to be actively doing this is disheartening."

Pincott notified Strathcona Community Safety Service, a team of private guards who are hired by the local Business Improvement Association to patrol the area.

She didn’t make a police report but has not entirely ruled it out.

"It's hard for me to make that call to bother them when I know there's so many more serious things happening in this neighborhood," Pincott said.

"I know that the nature of the neighborhood can be hard at times, but we honestly do our best. If there's someone sleeping in our parking stall, we're offering them water in the morning. We're trying to just help people more than anything. So it's really sad that someone would just take from us."