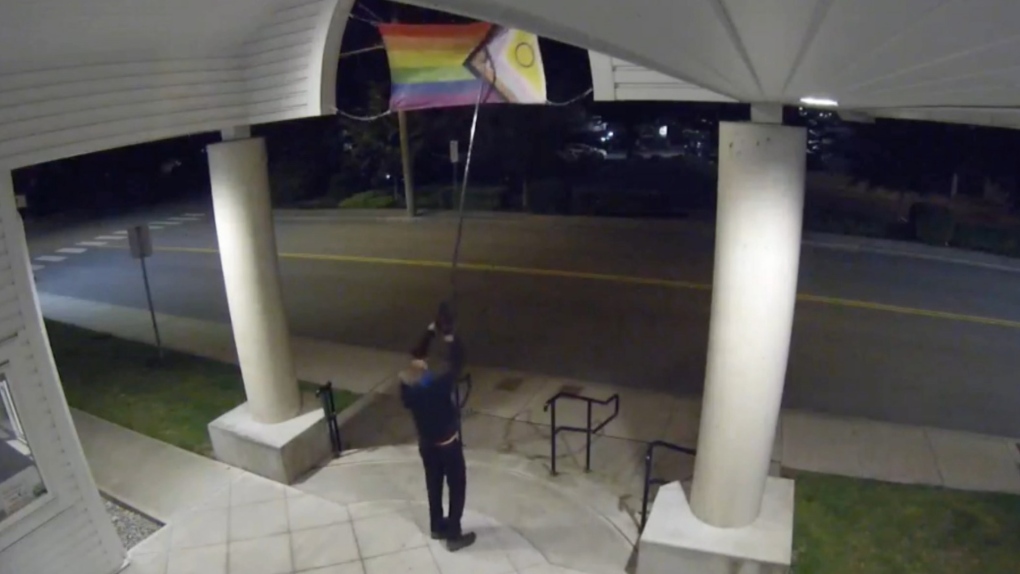 Police in Delta are asking the public for help identifying a person caught on video poking holes in the Pride flag at a local church this week. (Delta Police Department)

Police in Delta are asking the public for help identifying a person caught on video poking holes in the Pride flag at a local church this week.

The incident occurred around 3:30 a.m. Tuesday at Ladner United Church. Surveillance video shared by the Delta Police Department shows a suspect dressed in all black, save for a blue face covering, using a pole to damage the flag that flies over the church's entrance.

"Police believe that the pole had some form of a sharp edge at the tip, resulting in the flag being torn in multiple locations," the DPD said in a news release.

Before the attack with the pole, the suspect was recorded attempting to cover the surveillance camera, police said.

This is not the first time Ladner United Church has seen its Pride flag defaced.

In 2019, black paint was smeared on the church's Pride flag twice in the span of just two weeks.

In an email to CTV News on Wednesday, Delta police said their investigations into those previous incidents had not identified the person or people responsible, and no arrests have been made.

Nor has Ladner United Church been the only target of apparently anti-Pride vandalism in Delta this year.

Late last month, a vandal or vandals cut down the flagpole at Delta's city hall that had been flying the city's Pride Progress flag, prompting condemnation from Mayor George V. Harvie and DPD Chief Neil Dubord.

The investigation into that incident is ongoing, and police told CTV News they had no specific updates in that case, other than to say that there is no known connection between the flagpole vandalism and the defacement of the flag at Ladner United Church.

Officers also found multiple City of Delta Pride banners attached to light standards on Ladner Trunk Road damaged in a similar way to the one at Ladner United Church, police said in their release Wednesday. That vandalism is also under investigation and is believed to have occurred during the same time frame, police said.

“The material cost of a flag is minimal, but the damage to the fabric of our community, again, is significant when someone intentionally damages a symbol of love, inclusivity and pride," Dubord said in the release.

"There is no room for hate or intolerance in our communities, and we are asking for the assistance of the public to solve this senseless crime.”

Police said they believe the suspect in the latest incident is a white man in his 50s. They're asking anyone who recognizes the suspect or has information about the vandalism to call them at 604-946-4411 and reference file number 22-14382. Tips can also be provided anonymously via Crime Stoppers.

Police announced a breakthrough Tuesday in the killings of four Muslim men in Albuquerque, New Mexico, charging a man from Afghanistan – himself a Muslim – with two of the slayings and identifying him as a prime suspect in the other killings that put the entire community on edge.

Grand jury declines to indict woman in Emmett Till killing

A Mississippi grand jury has declined to indict the white woman whose accusation set off the lynching of Black teenager Emmett Till nearly 70 years ago, most likely closing the case that shocked a nation and galvanized the modern civil rights movement.