Caught on cam: BMW zooms through Surrey at triple the speed limit

Caught on cam: BMW zooms through Surrey at triple the speed limit 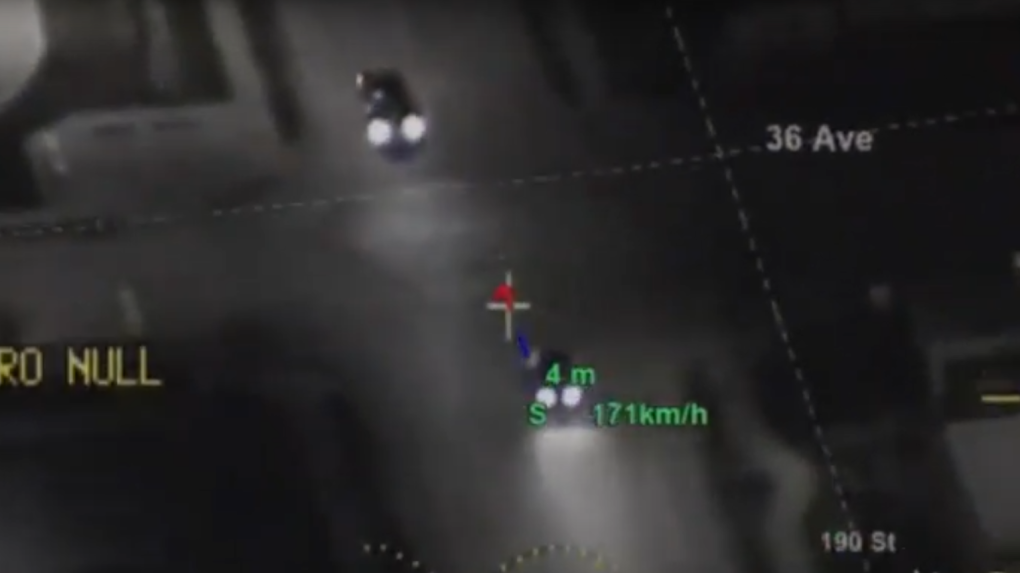 A still image from video released by the Surrey RCMP shows a speeding vehicle seen from the air.

The video captured by the RCMP's Air One helicopter was released Thursday, but shows an incident that occurred in late March.

The RCMP said a driver was seen speeding past a cruiser in the early morning hours of March 26. That same driver could be seen from the air, and allegedly clocked at speeds "in excess of 150 km/h" in what was only a 50 km/h zone.

Black-and-white video from the RCMP shows a vehicle travelling along 190 Street, and passing another vehicle at 36 Avenue.

The software that is part of the system shows the driver's speed climbing, reaching a peak of 186 km/h.

The bird's-eye view shows the driver getting pulled over as they turn left onto 192 Street. There are no time stamps on the video, which appears to have been edited, so it's unclear how long the driver was followed from the air.

Police said the BMW 135i was impounded, and the driver was given a violation ticket for excessive speed.

In B.C., a ticket for exceeding the speed limit by more than 60 km/h costs $483. Drivers convicted under this part of the Motor Vehicles Act are also given three penalty points.

The driver will also be responsible for tow and storage fees associated with the impound.

Under B.C.'s Motor Vehicle Act, a "race" can refer to several different circumstances, including speeding to get to a destination ahead of another driver, even if the motorists aren’t using the same route.

The incident last month happened a little over a week before two other vehicles were impounded in the same area for similar driver behaviour.

Mounties said a Toyota Supra and an Infiniti G37 were impounded in a street racing incident that saw two more drivers ticketed.

Officers did not give details on speeds they observed. If the drivers were travelling more than 40 km/h over the limit, but less than 60 over, they may have been fined $368 instead of $483.

The Surrey detachment said in a statement issued with the video that it takes a zero tolerance approach to street racing.

All three drivers were ticketed by police conducting proactive enforcement in what officers say is an area well-known for street racing.