Canucks trade one defenceman, acquire another as trade deadline approaches 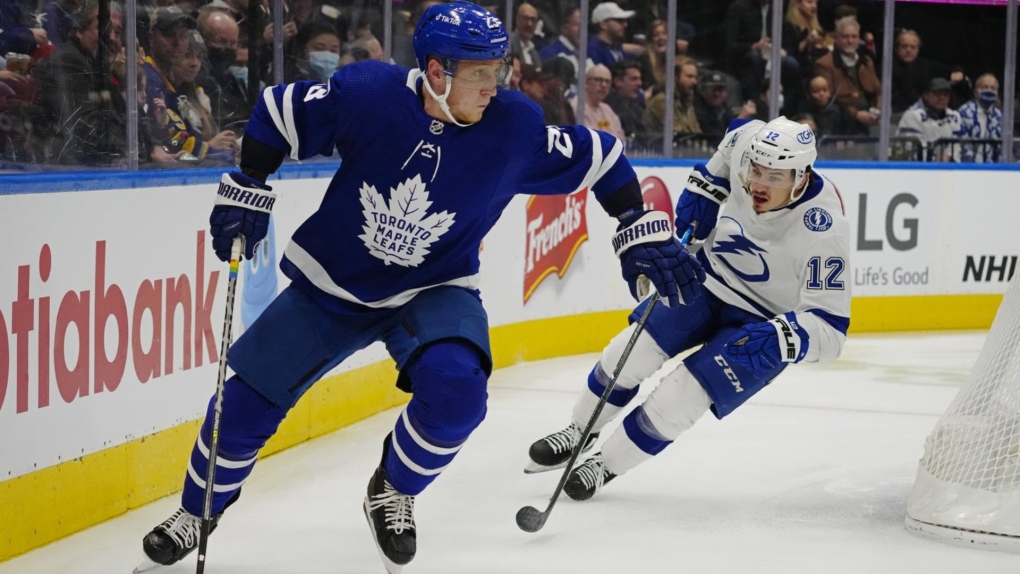 The Vancouver Canucks added some youth to their blue line Sunday, acquiring defenceman Travis Dermott from the Toronto Maple Leafs.

The Canucks sent the Leafs a third-round pick in the 2022 NHL draft.

“Travis Dermott was a guy that obviously we talked about getting a little bit younger here. Travis can play both left and right side,” general manager Patrik Allvin told reporters on Sunday. “Our pro scouts and our analytic department were excited about him and I've had the opportunity to follow him for a couple years here in Toronto.”

Dermott, 25, has one goal and four assists in 43 games this season. He fell behind Rasmus Sandin and Timothy Liljegren on the Leafs' depth chart in recent weeks and rumours have swirled that he'd be leaving Toronto.

“I love the roster that we have here and I see a lot of potential going forward. So I'm just really happy to be part of it.”

A native of Newmarket, Ont., Dermott was taken 34th overall by Toronto at the 2015 draft. He signed a two-year contract with an average annual value of US$1.5 million in July.

The third-round selection the Leafs received in the trade with Vancouver originally belonged to the Winnipeg Jets.

Dermott registered 12 goals and 52 points in 251 regular-season games with Toronto after making his NHL debut in the 2017-18 season. He added two goals and three assists in 22 playoff contests.

While he plans to start his time in Vancouver by focusing on his defensive game, Dermott believes the change of scenery will be a benefit long term.

“I think it's a great opportunity for me. Lineups change, hockey happens and there's some new competition that comes through. Things happened in Toronto in a way that maybe I wasn't planning for it to happen,” he said. “It seems like a perfect time and a perfect place for me to get a little reset.”

The Canucks are also hoping to maximize the young defenceman's potential, Allvin said.

“Definitely I think Travis is a great character person and has qualities of doing more,” the GM said. “And I hope we can help him in this environment here.”

The Canucks made another move earlier in the day, trading defenceman Travis Hamonic to the Ottawa Senators for a third-round pick in 2022.

That selection originally belonged to Vancouver, but was traded to the Vegas Golden Knights and then subsequently flipped to Ottawa.

“Travis was very professional here this morning when this came up and he's a good hockey player and a great person,” he said.

Hamonic signed a two-year deal worth an average $3 million per year in July. He's put up three goals and four assists in 24 games for the Canucks this season.

Allvin said Saturday's ugly 5-2 loss to the Calgary Flames had nothing to do with the moves Vancouver made Sunday.

“As I said from the start here, we want to take our time to evaluate our roster and our players,” he said. “I don't make emotional decisions after wins and losses and this is just a part of the process of getting younger and also creating some cap space here.”

The Canucks may still be active ahead of the trade deadline, set for Monday at 3 p.m. ET, Allvin added.

This report by The Canadian Press was first published March 20, 2022.