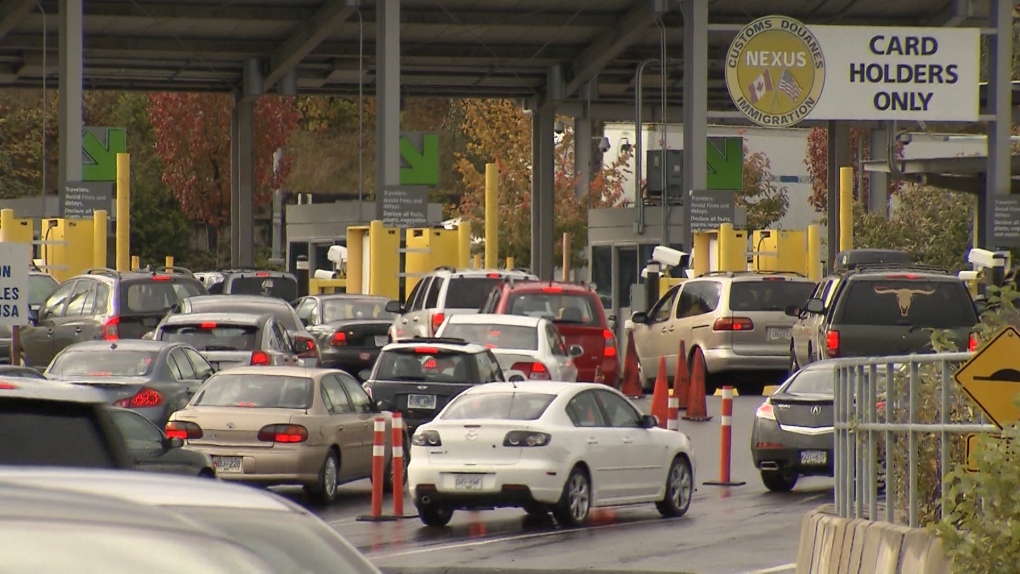 FILE: Drivers are seen lined up at a B.C. border crossing in March 2020.

A California resident who repeatedly crossed into British Columbia at the height of the COVID-19 pandemic without meeting Canada's PCR testing requirements has been ordered to pay thousands of dollars in fines he was issued at the border.

Richard Alexander Ressel tried disputing the hefty fines in Surrey provincial court this month, arguing he should have been exempt from the COVID-19 testing rules on compassionate grounds because he had been entering Canada to visit his mother, who was suffering from cancer.

Judge Kimberley Arthur-Leung was not swayed, noting the emergency travel measures federal officials implemented earlier in the pandemic "did not permit any such exemption," and that Ressel's circumstances did not make him eligible for any other exemptions either.

"One simply does not freely come and go in the midst of a global pandemic," Arthur-Leung wrote in her Oct. 19 decision. "Every country was grappling with the spread of COVID-19, and even the country where he resides in the United States were no strangers to putting in place both national and state laws to control the spread of COVID-19."

Ressel was caught entering Canada without proof of a negative PCR test twice last year, on April 12 and June 11. At the time, everyone crossing the border was still required to present the results of a test taken within 72 hours of entry.

On both occasions, an officer from the Public Health Agency of Canada informed Ressel of the rules and gave him a chance to turn around and obtain a test. Ressel, who is a Canadian citizen with a valid Canadian passport, refused the offer and demanded to be allowed into the country both times.

On his first visit, Ressel was issued a $3,450 fine under Canada's Quarantine Act. By the time of his second trip, officials were growing increasingly concerned about the spread of new COVID-19 variants and had increased the fine to $5,750.

On each occasion, Ressel was also given two take-home tests to be administered a week apart and ordered to quarantine for 14 consecutive days. The California resident tried arguing those measures made the government's requirement for travellers to show up with a pre-arrival PCR test in hand redundant.

Arthur-Leung said while that argument "at first blush appears simplistic and novel," it fails to consider the gravity of the global crisis at that time. She noted that "countless" frontline workers had placed their lives at risk doing their jobs since early 2020 – including those working at the border.

"These persons, throughout the pandemic, operated day in and out physically facing travellers and persons seeking entry. There is a reason why a negative COVID-19 PCR molecular test was required," she wrote.

"Mr. Ressel may have been asymptomatic upon physical presentation at the border, however, he is not qualified nor did he have the ability to know if he had COVID-19. All other persons presenting themselves at our ports of entry were in the same position."

Ressel also told the court he was unaware of Canada's testing requirement when he arrived at the border in April 2021, though the judge found that dubious, particularly as he testified he had been "waiting forever" to see his mother because of the emergency orders in place.

"The measures in place are ever evolving, just like COVID-19. Every person presenting him or herself to a Canadian port of entry as an adult is required to ensure that he or she is familiar with the requirements that will be in place and are in place."

The judge did consider Ressel's ability to pay the fines – noting he has a soil and compost business that earns roughly $2,500 per month, and is financially supported by his family – and opted to reduce the first penalty to $1,500 plus a victim surcharge.

The second, more expensive fine, which was issued after Ressel acknowledged being aware of the rules, was upheld in full.