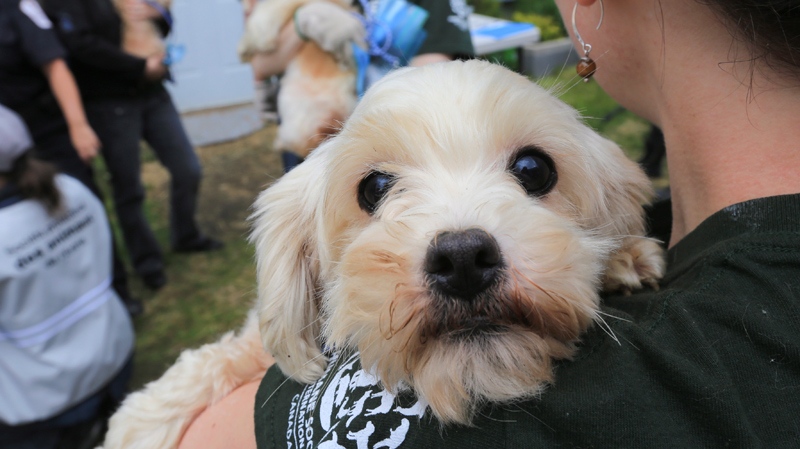 FILE IMAGE: A dog awaiting veterinary triage is shown after being rescued from a puppy mill in Estrie, Quebec. (Associated Press)

B.C.’s animal welfare watchdog is being criticized for a policy change that could allow branches to transfer in out-of-province dogs for adoption.

The proposal, published last month, would let SPCA locations with excess capacity bring in canines from other B.C. regions, neighbouring provinces or from U.S. states on the west coast.

In the document, the agency says it has experienced a reduction in dog intake over the past few years, which it believes has led to reduced traffic and support for the organization because branches no longer have enough adoptable dogs to draw the public into the shelters when they’re looking for a pet.

The report says anecdotal evidence from its staff and volunteers suggests that shortage is driving people who are looking for specific dogs – including small breeds and puppies – to for-profit pet sellers, including backyard breeders.

The agency says by transferring in rescue animals from other jurisdictions, it can save lives while assisting other shelters in lowering their pet overpopulation.

“It also assists the SPCA in rebuilding a reputation as a community for dog adoption. If more adopters come to [us] to meet dogs, this will benefit our B.C. dogs as well as the dogs we support,” the document reads.

It adds that dogs being imported should be highly adoptable dogs that are underrepresented in B.C. and won’t require a lot of resources to adopt out.

But Kathy Powelson, executive director of Paws for Hope, said the SPCA is more concerned with meeting consumer demand than its animal welfare mandate.

“There is a homeless dog crisis in our province,” she told CTV News.

“There are so many animals in B.C. communities and First Nations reserves that need help. We don’t think it’s the SPCA’s role to fill consumer need. They could be partnering with more rescues in rural areas. Their role should be to educate people and legislate for change.”

The SPCA said the transfers wouldn’t come at the expense of dogs in the province and that it will continue to push for tougher animal welfare legislation in the province.

Community manager Lorie Chortyk said branches would only be allowed to bring in new dogs if they have excess capacity, and that there are no animals within the SPCA system that could be transported to the location. The branch must also prove there are no local pounds, rescue groups or B.C. First Nations communities that could transfer dogs into their care.

Priority would be given to high-kill shelters.

“The protocol is clear – it can only happen if all the conditions are met. This doesn’t come at the expense of dogs in B.C.,” said Chortyk.

Paws for Hope maintains the SPCA would never have to transfer in new dogs if it developed partnerships with rescue organizations in rural areas across the province.

Powelson said there are hundreds of communities in the province with severe pet overpopulation issues, including many where individuals are paid a bounty to shoot or drowned stray dogs.

“It’s a hidden problem but it’s right in our backyard, and they need to do something about it,” she said.

The high cost of transporting homeless animals from isolated communities can be a big barrier to rescue groups in remote areas, she added, saying some groups must travel hundreds of kilometres to reach the nearest SPCA shelter.