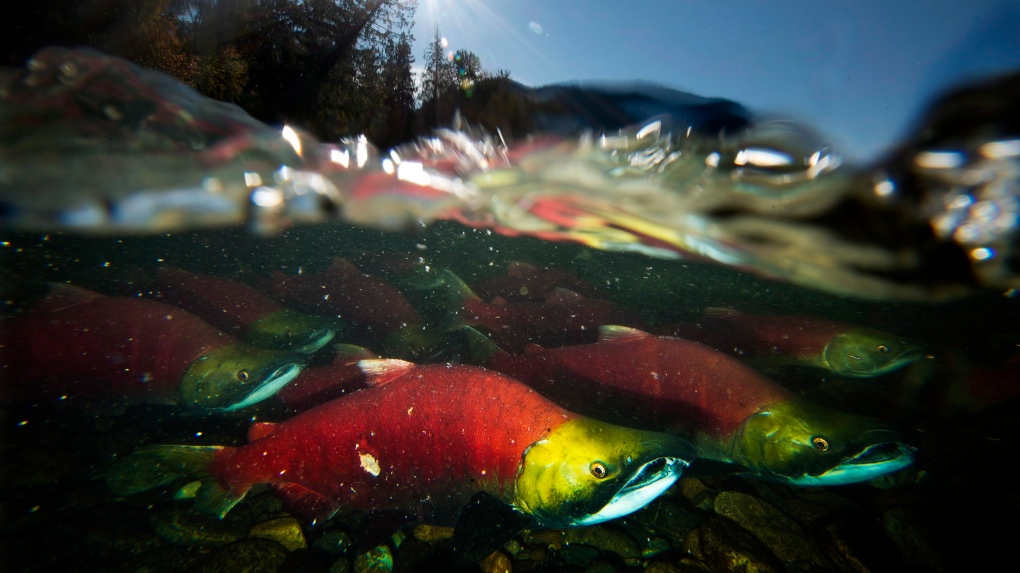 Federal fisheries experts are painting a devastating picture of the challenges facing Pacific salmon and point to climate change as the main culprit. (THE CANADIAN PRESS/Jonathan Hayward)
Vancouver -

A study that links low summertime water flows in a British Columbia river with lower productivity across 22 generations of a struggling salmon population could help guide how rivers are managed to support fish, the authors say.

The study published Friday in the journal Ecological Solutions and Evidence used data from 1992 to 2013 to examine changes in the productivity of early summer chinook in the Nicola River, a tributary of the Thompson River in B.C.'s southern Interior.

The modelling predicted fish that were spawned and later reared when the river's flows in August were 50 per cent below average had a 29 per cent lower productivity rate, referring to the number of offspring produced per spawning fish that survive to adulthood.

Adult chinook return to the river from the ocean to spawn, while their offspring spend a year in fresh water after hatching from eggs deposited in gravel nests.

“August is a really critical month, because you have low flows, you have fish coming in, holding and waiting to spawn, and you have high air and water temperatures,” said Warkentin, who completed the research while studying at Simon Fraser University and now works as a biologist with Fisheries and Oceans Canada.

The lower flows combined with high air temperatures mean the water heats up more quickly, to the point that it can be harmful to salmon, while also reducing the availability of deeper, cooler pools where the fish take refuge, he said.

Overall, the Nicola's average August flows were about 26 per cent lower during the two-decade study period than in the early part of the 20th century, the study notes.

It attributes the decrease to the impacts of climate change, water withdrawal and land use, such as logging, farming and urban development.

Warkentin said he hopes the study's findings will support a more holistic understanding of water management for the Nicola, recognizing the impact of low flows on a salmon population that's been assessed as endangered by the Committee for the Status of Endangered Wildlife in Canada.

The province manages the Nicola River's flows, working with federal fisheries officials, First Nations and other local authorities, while considering snowpack, water levels in lakes and reservoirs, the severity of any drought and demand from nearby communities and agricultural operations.

There is no set amount of water to support a healthy salmon population, said Richard Bailey, a retired Fisheries and Oceans biologist who contributed to the study.

Rather, the right flow is the one that creates the best opportunities for the fish to survive while taking into account surrounding conditions, he said, including air temperatures and the effects of wildfires and different land use.

Changes in the mountainous upper reaches of a watershed significantly affect the timing and intensity of spring runoff and the duration of drought, Bailey noted.

Melting snow and rain run more quickly off slopes that have been logged or scorched by wildfire, bringing sediment that clogs spawning grounds, raising the risk of flooding and leaving little water to trickle down over the summer, he said.

Re-establishing trees and vegetation higher in a watershed is crucial for rehabilitation work below, along riverbanks and floodplains, Bailey added.

The modelling also demonstrated that generations of Nicola chinook incubated during years with significant fall flooding had lower productivity, as floodwaters can crush or scour salmon eggs from the riverbed, Warkentin said.

The finding doesn't bode well for eggs that were incubating before last November, when a series of atmospheric rivers deluged southwestern B.C., causing widespread flooding. The Nicola River swelled and carved a new course, swallowing homes and chunks of the highway between Merritt and Spences Bridge.

“The flood in November was larger - based on the preliminary numbers I've seen - was larger than any of the floods on record in the fall that we looked at,” Warkentin noted.

The Committee for the Status of Endangered Wildlife assessed Lower Thompson chinook as endangered in November 2020, including those that spawn in the Nicola. It recommended the population be listed under the Species at Risk Act, noting a “steep decline” in the number of mature fish from 2013 to 2018.

The chinook face numerous severe threats in their freshwater and marine habitats, including the effects of logging following an extensive outbreak of mountain pine beetle, wildfires, water withdrawal and climate change, the committee found.

It's up to federal cabinet to decide whether to list any species as threatened or endangered, designations that carry prohibitions against destroying critical habitat.

This report by The Canadian Press was first published Jan. 21, 2022.