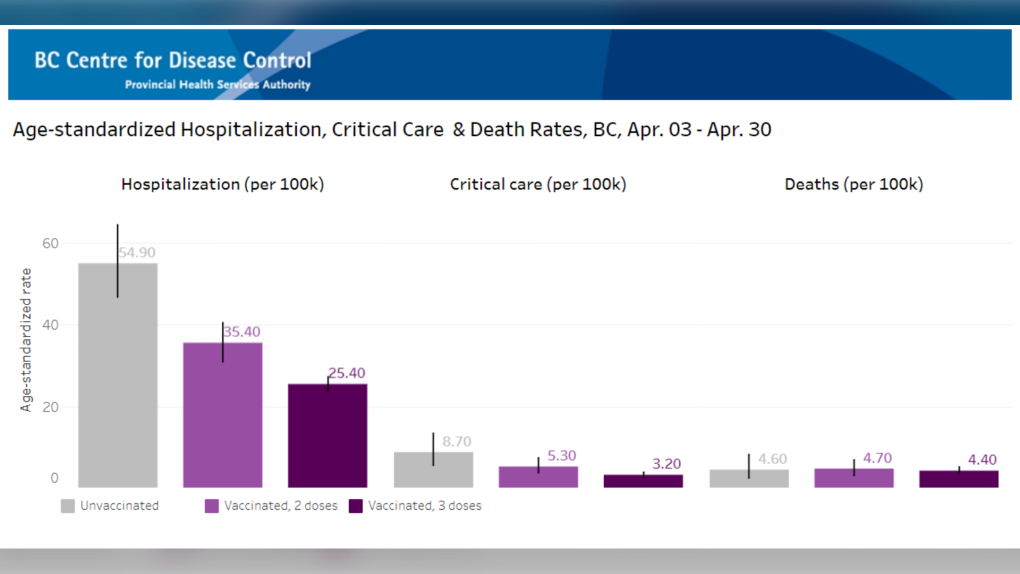 A screenshot from the B.C. Centre for Disease Control's COVID-19 Surveillance Dashboard shows little difference in death rates by vaccination status between April 3 and 30. (BCCDC)

While it's long been known that vaccination significantly reduces the likelihood of severe outcomes from COVID-19, B.C.'s recent change to how it reports deaths related to the disease may be making it harder to see that in the data.

On April 2, the province began reporting "30-day, all-cause mortality" in its weekly COVID-19 updates. This means anyone in the province who dies within 30 days of a positive lab test for the coronavirus is reported as a COVID-19 death, regardless of whether the disease actually caused the fatality.

This change appears to be at least partially responsible for recent shifts in the death rates reported on the B.C. Centre for Disease Control's COVID-19 Surveillance Dashboard, which now shows essentially no difference in age-adjusted deaths per 100,000 people across different vaccination statuses.

The Ministry of Health says the data on the dashboard shouldn't be interpreted as an indication of decreased vaccine efficacy.

WHAT THE DATA SAYS

The BCCDC dashboard shows that between April 3 and 30, there were 204 deaths involving people who had tested positive for COVID-19 over the preceding 30 days in B.C.

These raw totals don't account for the significant differences between the populations, however, such as the fact that the triple-vaccinated group is significantly larger and older, on average, than the other groups.

To adjust for these differences, the BCCDC calculates and reports "age-standardized" death rates per 100,000 people for the three largest groups: the unvaccinated, the double-vaccinated and the triple-vaccinated.

The April 3 to 30 data is the first time since the dashboard was launched nearly a year ago that the difference between age-standardized death rates across the different groups has been so small.

It's also the first time that the period covered on the dashboard has included only deaths recorded under the all-cause mortality method.

HOW THE DATA IS LIMITED

The BCCDC maintains that comparisons between deaths reported before the April 2 switch and after it are unreliable.

Despite this, the dashboard – which reports roughly one month's worth of data at a time – continued to report deaths and death rates using a mix of the two systems during the month of April, when the data presented stretched back to dates before April 2.

During that time, CTV News was tracking and calculating death rates among triple-vaccinated and unvaccinated people in the vulnerable 70-plus age group. The analysis found that, as the total number of deaths came to include more weeks in which all-cause mortality was being reported, the difference between the two death rates narrowed significantly. 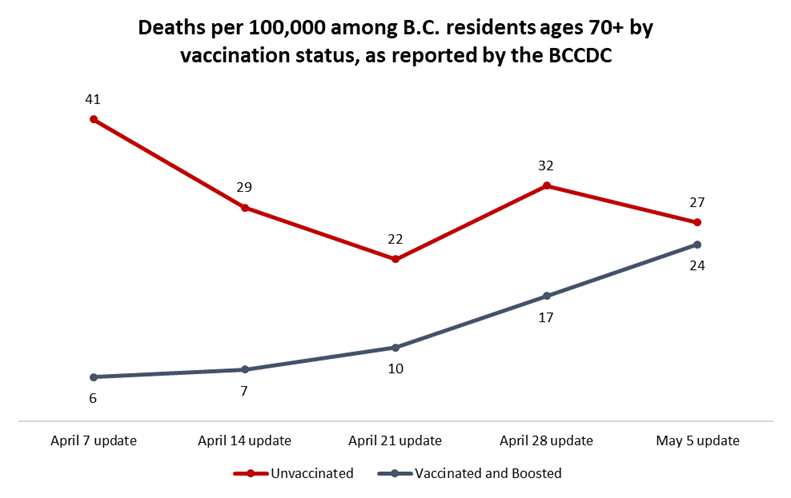 CTV News asked the Ministry of Health how the switch to all-cause mortality could contribute to the flattening of death rates across vaccination groups – both age-adjusted and among those ages 70 and older – given the apparent correlation in the data.

"Ultimately, there are two important things to consider," the ministry said in its response.

"The first is that the overall number of deaths in people age 70 and older are relatively small. While your graphs are correct, when the overall numbers are small, the rates are unstable and are more likely to fluctuate over time."

"The second is that we switched to a new reporting system in early April which makes comparisons between the death data from before April with current data unreliable. In the new system, deaths include any COVID-19 lab positive cases who died from any cause recorded within 30 days of their first positive lab result date. This means the numbers are dependent on testing rates in people aged 70 and older. Testing rates are typically higher for those with three doses of vaccine and there may be other differences across 70-year-olds who have different vaccination status that are not accounted for in the numbers."

The ministry added that the numbers reported on the dashboard - though they include calculations of outcomes by vaccination status - are not measures of vaccine effectiveness.

"They simply show surveillance data and do not adjust for differences by testing, prior infection, and other important factors that may differ among populations with different vaccination status," the ministry said.

Calculations of vaccine effectiveness in B.C. take these factors into account, and the ministry said updated calculations are on the way.

"Vaccine effectiveness results by age and time since last dose are being finalized and will be shared publicly soon," the ministry said.

"For vaccine effectiveness analyses, we would be limiting analyses to deaths primarily from COVID (rather than all-cause mortality)," it added.

The most recent study of vaccine effectiveness in B.C. looked at the period from September 2021 to February 2022, when Delta and Omicron were the dominant variants in the province.

The summary of that study on the BCCDC website does not mention deaths, but it does conclude that vaccines "provided good protection against severe outcomes," with two doses estimated to prevent 65 to 75 per cent of hospitalizations from Omicron and a booster dose increasing that protection to more than 90 per cent.

Canada has been without an ambassador to China for 6 months. What's the holdup?

At a time of enhanced global uncertainty and growing Chinese influence, the Canadian government faces mounting pressure to appoint a diplomatic representative in Beijing after the post has sat vacant for six months.

Canadians on TikTok open their doors to Americans seeking abortions

With the overturning of Roe v. Wade opening the door to abortion bans in the U.S., Canadian Tiktokers are welcoming Americans who are considering travelling north of the border to get an abortion.

A 101-year-old man was convicted in Germany of 3,518 counts of accessory to murder on Tuesday for serving at the Nazis' Sachsenhausen concentration camp during the Second World War.

Tom Mulcair: Notion that multiculturalism is a threat has become commonplace in Quebec

Quebec Premier Francois Legault's recent remarks are just repeating something that has become commonplace in Quebec: the notion that multiculturalism is a threat, writes former NDP leader Tom Mulcair in his latest column for CTVNews.ca.