B.C. man travels to eastern Europe to honour life and legacy of 'father of Ogopogo'

B.C. man travels to eastern Europe to honour life and legacy of 'father of Ogopogo' 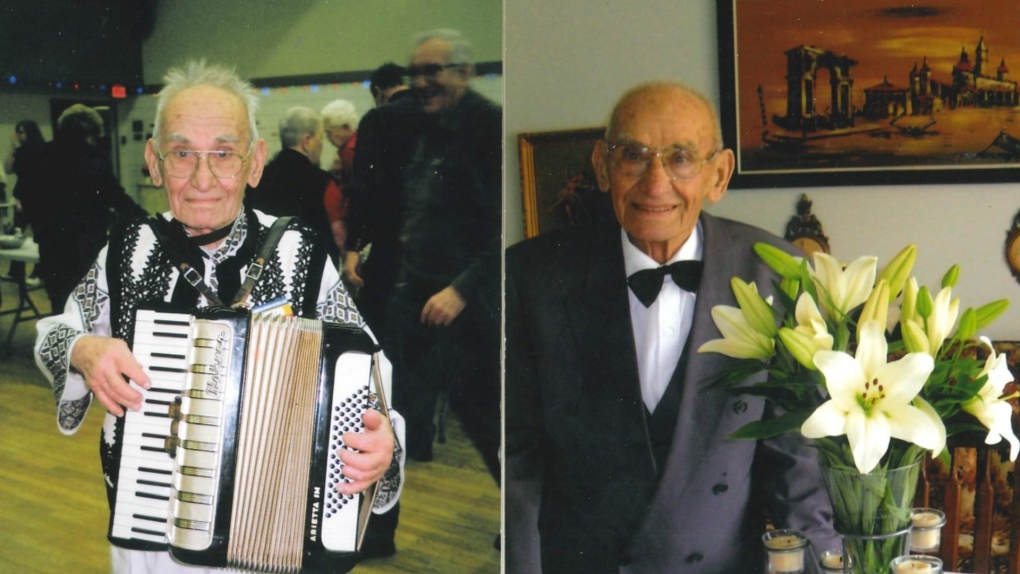 Paul Nicu, Kelowna's so-called 'father of Ogopogo,' is pictured before his 2013 death at age 93.

A bronze bust sculpture of a B.C. man nicknamed “the father of Ogopogo” is about to be on public display in Romania.

Kelowna’s Ray Taheri is packing the 80-pound bust with him on his journey to eastern Europe on Wednesday, where he plans to fulfil his late friend Peter Nicu’s dying wish.

“Peter wished for after his death his estate to be allocated to helping orphans and poor people in Ukraine, Moldova and Romania,” Taheri told CTV News. “He wished for his life to be remembered and to be a role model for younger generations.”

In 2013, the same year Nicu passed away at his Kelowna retirement home at age 93, Taheri says he commissioned the bust of his former neighbor and dear friend with the goal of installing it in one of three countries where Nicu spent his youth.

The UBCO professor of engineering is named as an executor and trustee in Nicu’s will, but Taheri says he wasn’t able to access the funds for his friend’s dying wish until 2019, shortly before the pandemic began thwarting international travel.

“It was a burden over me for 10 years. I promised him on the last day of his life, I told him I would do it, and now I feel kind of like part of my life has been accomplished,” said Taheri, who is in his mid 50s and describes Nicu as a grandfather figure.

FROM MOLDOVA TO CANADA

One day before kicking off his international adventure, Taheri told Nicu’s life story to CTV News, calling it a “beacon of human perseverance.”

“Peter’s life story was nothing short of magical,” Taheri said. “He thought that his life had so much more to offer to people than just ‘some normal guy came here after the Second World War.’”

Nicu was an only child who was born in the city of Chișinăuon, Moldova on June 23, 1920.

When he was five years old, Nicu’s father got a job operating a lighthouse in Odesa, Ukraine. By age 12, Nicu had been doing his father’s job for him for years and finally decided to run away from a situation he described as abusive.

“Catching the wrong train, he ended up in the neighbouring country, Romania, after several hours. Being hungry, scared, cold and not speaking the language, he was in the streets of Iași for a day and finally passed out in front of the flour milling factory,” said Taheri.

Nicu ended up being taken in by the owner of the factory, where he worked and educated himself in machinery.

He was only 16 when he was selected to study engineering with the Romanian Air Force, which he graduated from three years later with an honours degree.

Nicu went on to serve with the force until the start of the Second World War.

“When Romania fell, he became a prisoner of war and was sent to Germany. A few years later, he was released and returned home,” said Taheri.

Nicu and his wife migrated to Kelowna in the early 1970s.

He became known as the “father of Ogopogo” after the City of Kelowna commissioned him to design an amphibious vehicle in the shape of Ogopogo, a monster that, according to Canadian folklore, lives in the Okanagan Lake.

“The designed vehicle brought enormous joy to residents of Kelowna for many years during the annual parades,” said Taheri, who believed the amphibious automobile was dismantled and discarded after Nicu’s estate was sold.

Taheri was once neighbours with Nicu, and he says one of the factors that solidified their friendship was the pair’s connection to Odesa, where Taheri’s wife was born.

While Taheri says his number one reason for travelling to eastern Europe is to fulfil his promise to his friend, the professor says he’s also doing it for his own family.

“My two daughters are both half Ukrainian. So, I mean, they are too young to understand the concept of honour and, you know, liberty and things like that. But one day they will ask me, ‘What have you done?’ and I want to be a proud father,” Taheri said.

“People are suffering in Ukraine and we must be part of the solution,” he added. “What I’m doing, I think it should sit well with people there that I’m coming from somewhere under a complete blanket of peace and security and freedom for their care. We want to show our solidarity.”

Taheri plans to spend most of his time in Oradea, Romania, where the bust will be placed at a children’s centre. There, he plans to develop an educational program, complete with a design thinking lab with 3D printers and 3D scanners.

“I want to foster creativity and curiosity. I want this kindergarten and orphanage to be the envy of others, to make these children proud. Hopefully it goes that way, the way that Peter wanted.”

Taheri says his trip also includes plans to work with charities in Moldova and Ukraine that support orphans and refugees. When he returns to Kelowna on Feb. 21, one bronze bust of Nicu will be in Romania, while another remains in his home.

If the City of Kelowna doesn’t want it, Taheri plans to keep it himself.

“It’s not only a bust, it is Peter’s story and the energy of a man who gave away everything he had in his life for a cause.”

On top of donating upwards of $80,000 to people in need in eastern Europe, Nicu allotted most of his estate to Kelowna General Hospital.

“I'm very proud that I met Peter. He really impacted many lives, including mine,” Taheri said. “I consider myself a better person after meeting him and, while fulfilling his mission, I certainly hope to become even a little bit better than where I was before.”