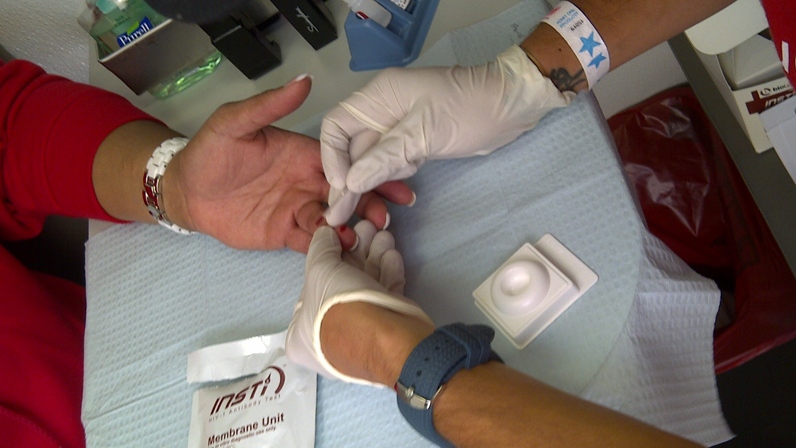 The INSTI rapid HIV test, made by Richmond, B.C.-based bioLytical Labratories, works in 60 seconds and is available at select testing clinics in the Lower Mainland. (Handout)

B.C. is the only province in Canada witnessing a significant decline in new HIV diagnoses, and experts say a local strategy emphasizing treatment as prevention could eliminate transmission of the disease if everyone was tested.

Progress in testing and treatment has gained momentum in recent years with a number of breakthroughs developed by B.C. researchers.

Dr. Julio Montaner, Director of the B.C. Centre for Excellence in HIV/AIDS said B.C. is the only province in Canada to see a significant decline in new HIV diagnoses.

“B.C. has seen a 90 per cent reduction in deaths related to HIV/AIDS and we’ve had a greater than 65 per cent decrease in new HIV cases,” he said.

Montaner credits the decline to B.C.’s adoption of his “treatment as prevention” strategy, a program that encourages universal testing, decreasing the stigma associated with HIV/AIDS and providing medical treatment and support in an accessible way.

Montaner was also a lead investigator in the development of the highly active antiretroviral therapy (HAART), a drug cocktail introduced in 1996 that has become the global standard of care.

He explained the therapy has been successful in sending the disease into remission and decreasing the chances of transmission between partners by 96 per cent.

Accessibility of testing in B.C.

In B.C., Montaner estimates there are currently between 2,500 to 4,500 people with HIV who are unaware they have it, and may not even suspect they are at risk.

Montaner says finding these undiagnosed cases is critical to eliminating the transmission of the virus and making rapid HIV tests more accessible could help the effort.

“The cornerstone of treatment as prevention strategies is identifying those individuals who are infected with HIV, so they can receive timely, appropriate care thereby enhancing the quality and duration of their lives, as well as simultaneously reducing -- if not arresting -- the rate of transmission of infection,” he said.

There are a number of significant benefits to rapid HIV testing, according to Shackleton, including increasing accessibility, eliminating a follow up appointment and lowering costs. He said the tests cost under $15, compared to standard lab testing, which costs hundreds of dollars.

Currently, the test is only offered in select testing clinics in the Lower Mainland, including at St. Paul’s Hospital. In the United States, however, it is more widely available to the public and can be performed by people without medical training.

“In my view, there is really no reason why it couldn't be made available in the many clinics, physician offices, and primary care facilities throughout British Columbia as well as for special community-based testing initiatives,” Shackleton said.

Montaner agrees the rapid test is a ground-breaking tool in eliminating the spread of HIV.

“The rapid test is a great facilitator because it allows you to go into environments where testing may be difficult otherwise,” Montaner said. “You can go into a rural setting, a First Nations reserve or isolated communities. If they’re very anxious or not willing to come back, in one minute you solve the problem and you don’t have to worry about losing that person in the follow up.”

“The point of care test is well suited to use at community testing sites. However, this test is not likely to be needed or distributed widely to clinics and doctor's offices. Family doctors are already seeing 8,000 patients a day in Vancouver and ordering blood tests for many of them. The best way to increase HIV testing is to simply add an HIV test to the blood tests that are already being ordered,” said Dr. Réka Gustafson, Medical Health Officer, Vancouver Coastal Health.

Another part of the strategy is changing the stigma associated with HIV and testing.

“[Instead of saying ‘we’re testing to see if you have HIV] Say ‘we want you to have a test so we can confirm you’re HIV negative.’ By changing the wording we’re changing the stigma,” he said.

Assistant professor at Simon Fraser University Zabrina Brumme, who along with nine other researchers was a recipient of more than $800,000 in funding from the Michael Smith Foundation for Health Research, credited Montaner with putting B.C. on the map.

“He’s the reason B.C. is leading the way in HIV research,” she said. “The face of HIV has completely changed. It’s perhaps one of the greatest success stories in 20th century medicine.”

Brumme said B.C. is currently leading the world in promoting the new “treatment as prevention” strategy. “If we can identify and diagnose people with HIV it will help save their lives and lives of others.”