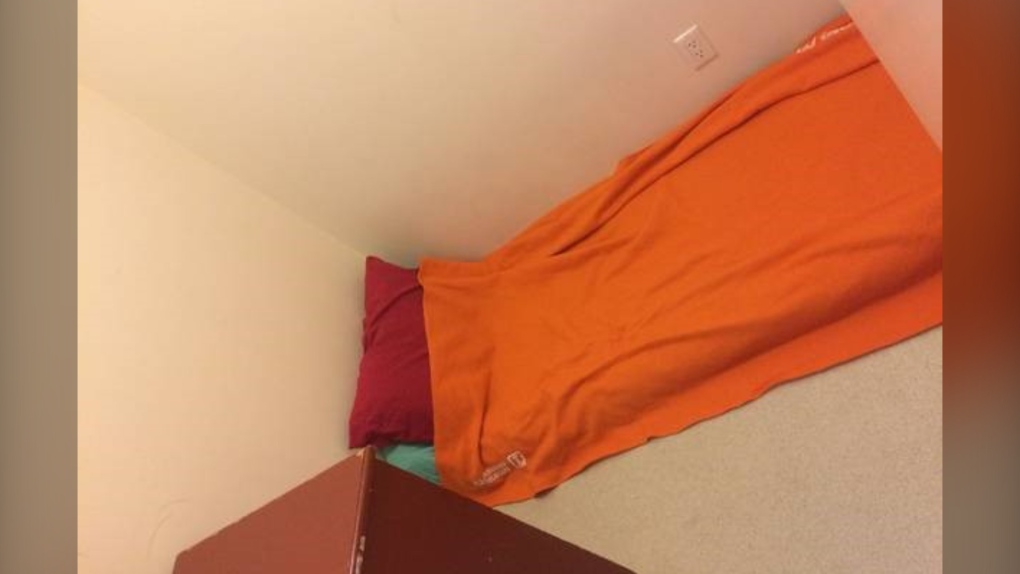 This photo from a Craigslist ad shows a den for rent in downtown Vancouver that is roughly 30 square feet in size.

A windowless den in a downtown Vancouver studio is about half the size legally allowed for a prison cell in Canada – and it's being rented for $750 a month.

Those currently navigating the city's rental market – notorious for high prices and low vacancy rates – are doing so at a time when record-breaking inflation is driving up the cost of everything from food to furniture. Wages aren’t keeping pace and tenants are bracing for their next annual rental increase which could be tied to the soaring Consumer Price Index.

Shared accommodation is one option people trying to find housing they can afford often pursue. But trying to find something for less than $1,000 a month brings up listings like one for a den that is "70 (by) 62 inches and without windows." A standard single mattress is 75 inches long, but a bed has been crammed into the space, resting rather awkwardly on the floor.

"You can use other parts of the studio as well. The price per month is $750 (everything included). Damage deposit is $350," the Craigslist ad reads.

"The building is right in the downtown and just three minutes' walk to the Stadium Skytrain Station. You'll share the apartment only with me (no other roommates)."

The dimensions of the den make it roughly 30 square feet. According to the Correctional Service of Canada, the minimum size allowed for a prison cell is roughly 70 square feet – which is also close to the minimum standard required for a bedroom in B.C.

While the dimensions of the whole apartment aren't provided, the listing does say it has an in-suite washer and dryer.

According to B.C. Housing, rent is considered affordable when it accounts for 30 per cent or less of a household's gross income. At $750 a month, this listing would be an affordable option for someone making about $2,250 a month. That works out to what someone working 35 hours a week making minimum wage earns before taxes.

It is twice the amount that people who receive income or disability assistance are given to pay for shelter each month.

Rentals like these, according to Robert Patterson with the Tenant Resource and Advisory Council, are often created by desperate tenants who are “trying to create a living situation they can afford.”

In a city where the average price of a studio sits at around $2,000, squeezing some basic furnishings into a space that was not designed to be a bedroom is relatively common.

"Many tenants have to resort to splitting rental units with many roommates to be able to make unaffordable rents. As affordable units continue to be lost through redevelopment and eviction, the units that are coming onto the market are almost exclusively 'luxury' priced rentals that working tenants cannot afford," Patterson told CTV News last month.

CTV News reached out to the person who put the ad on Craigslist but did not receive a reply.