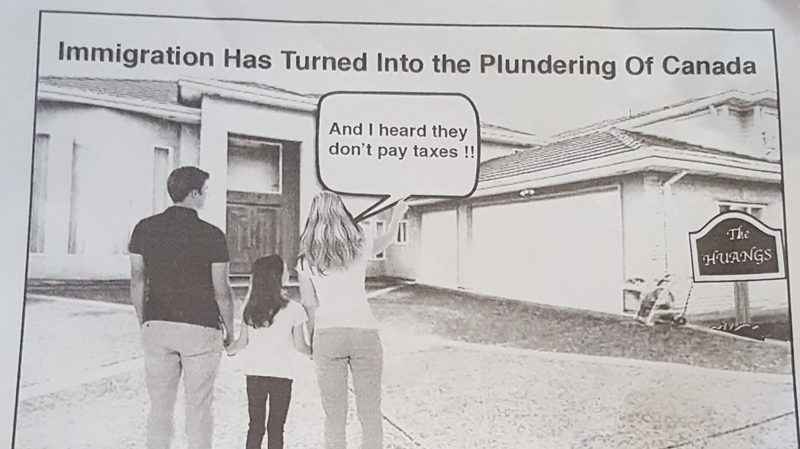 Richmond residents have received another racially charged flyer, this one accusing immigrants of "plundering" Canada.

Days after a silent protest held in opposition to anti-Chinese flyers being distributed in Richmond, residents have received another racially charged handout.

The latest unsolicited flyer accuses wealthy Chinese immigrants of "plundering" Canada by using the same social services as everyone else – including schools, healthcare and infrastructure.

It goes on to make an uncited suggestion that immigrant families are not paying taxes.

"Where have our politicians been on this social injustice issue?" it reads.

Asked about the latest flyers on Wednesday, B.C. Premier Christy Clark said she’s appalled that anyone feels it's acceptable to hand them out to people's homes.

"I think it's a disgrace," Clark said. "It's not what British Columbia's about, and I think the way for us to stop it is for all of us to condemn it."

Earlier this month, Richmond residents were delivered another flyer that made an apparent attempt to rally white people against their Chinese neighbours.

Mounties are investigating the handouts, which suggested immigrants are "taking over" the city and called on Caucasian residents to "save Richmond." The RCMP has asked anyone who receives such a flyer to contact them.

The troubling flyers also prompted a group of protesters to gather over the weekend for a silent protest in solidarity with the city's immigrant population.