15,000 take to the streets for Women's March in Vancouver

Thousands of people took to the streets of downtown Vancouver for the Women’s March on Washington Saturday morning, demonstrating against President Donald Trump and showing “solidarity and protection for human rights.”

The march began at 10 a.m. in Jack Poole Plaza, drawing such a large crowd of women, men and children that people overflowed onto the streets. 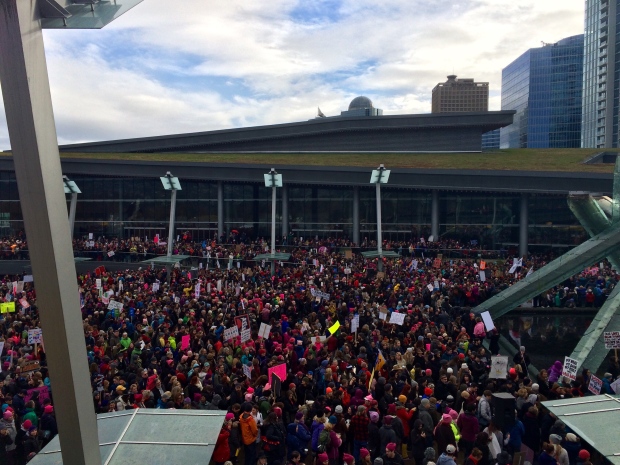 Speakers and music kicked-off the event, which then left the plaza and marched past the U.S. Consulate and the controversial Trump Tower, located on West Georgia Street.

Colourful signs and posters were in abundance, with messages like “Love Trumps Hate,” “Thou shall not mess with women’s reproductive rights,” “My America is tolerant and inclusive,” and “Hate has no home here.”

“We will mobilize as women and supporters of women to protect rights and civil liberties,” read the Women’s March on Washington – Vancouver Facebook event.

“We stand against hate in all forms and against targeting any groups or individuals. For ourselves and others, we express our right to respect and acceptance without bias or persecution.”

The march was one of hundreds planned around the world on Jan. 21.

More than half a million people were expected at a march in Washington, D.C., including many Canadians.