Woman with walker awarded $55K after B.C. RCMP officer 'assaulted and battered' her 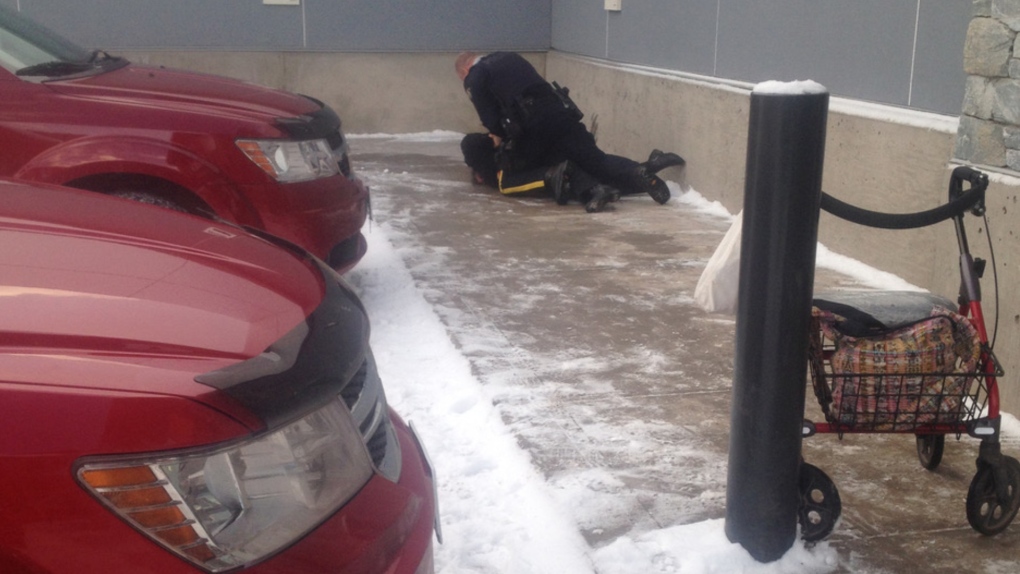 An RCMP officer tries to arrest Irene Josephs outside a Marks Work Wearhouse in Smithers, B.C. on Dec. 4, 2014 a few metres away from the walker she use for mobility. (Smithers Interior News)

VANCOUVER -- A B.C. woman who uses a walker for mobility has been awarded $55,000 in damages after a judge determined she was "falsely arrested, falsely imprisoned, assaulted and battered" by an RCMP officer in the province's north.

Irene Joseph was 61 years old when Const. Darrin Meier forced her to the ground and tried to handcuff her outside a Mark's Work Wearhouse in Smithers back in December 2014.

The officer suspected her of shoplifting, according to a court decision that was posted online this week, but let her go after a search of her purse failed to turn up any stolen merchandise.

Joseph, who is reported to be an elder from the Wet'suwet'en Nation, sued the Attorney General of Canada over the encounter, and a B.C. Supreme Court justice ruled in her favour on Friday.

In her decision, Justice Brenda Brown found it was "simply not necessary to physically subdue a woman of Ms. Joseph's age and limited mobility."

The court heard Joseph was shopping at Mark's Work Wearhouse when she bumped into a younger woman she recognized and started chatting with her. The store manager then noticed the younger woman stuff a pink scarf into her bag and confronted them.

The younger woman tossed the scarf away and bolted, according to the decision, but Joseph stayed and disclosed that she "had a scarf around her neck that she was buying."

Staff called police, and by the time Const. Meier arrived and spoke with the manager, Joseph was waiting in line to make her purchase.

After Joseph bought the scarf, the officer tried to question her, but she refused to stop or give him any information, including her name. Meier eventually tried placing her in handcuffs, which led to a tussle that didn't end until they were both on the cold sidewalk with Joseph being straddled face-down by the officer.

The elder put up enough of a struggle that Meier eventually gave up on handcuffing her, calling "enough" before getting back on his feet.

Explaining his actions to the court, Meier noted it was his experience that "shoplifters often pay for one item while concealing others that they are stealing" and that he believed it was suspicious that Joseph refused to give her name or allow him to search her purse voluntarily.

Brown found there were no reasonable grounds to arrest her, however, and that Joseph was under no obligation to answer his questions or identify herself.

But while Meier, who is a seven-year veteran of the RCMP, was found to have acted improperly, the judge didn't believe he acted "maliciously or high-handedly." She said the situation escalated quickly and suggested the officer hadn't given enough thought to whether he had a valid reason to make an arrest.

The court determined that Joseph suffered cuts, bruises and scrapes during the scuffle, as well as soreness in her neck, ribs and back. Before the incident, she already suffered from chronic pain and a fused left ankle.