Wanted for unlawful confinement: Have you seen these two suspects? 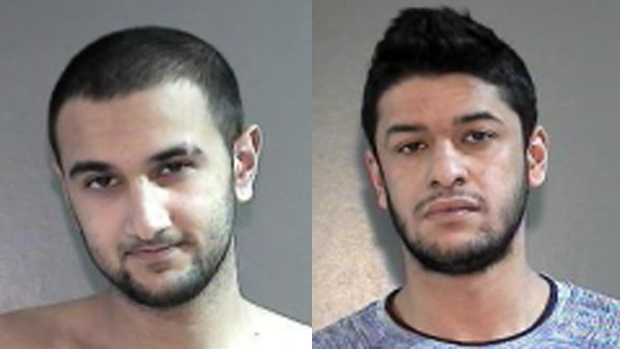 Shakiel Singh Basra, left, and Amarpreet Singh Samra are seen in these images provided by police.

Mounties in Surrey are asking for the public's help as they search for two men wanted on Canada-wide warrants.

According to police, Shakiel Singh Basra and Amarpreet Singh Samra are both 25 years old and face multiple charges including unlawful confinement, assault with a weapon and uttering threats.

Basra is described a 6'0", 119-pound South Asian male with a thin build and short black hair.

Samra is also 6'0" and weighs 150 pounds. Police say he has a medium build, black hair and brown eyes.

The suspects are believed to be in the Surrey area and are associated with a black 2017 BMW X5 SUV with B.C. licence plate number JL8 17D.

The RCMP is advising members of the public not to approach the men, but to call police immediately if they're spotted.

"Surrey RCMP's General Investigation Unit, with the assistance of Surrey Gang Enforcement Team, are continuing to investigate the incidents involving the two suspects, which are believed to be isolated and targeted events," police said.