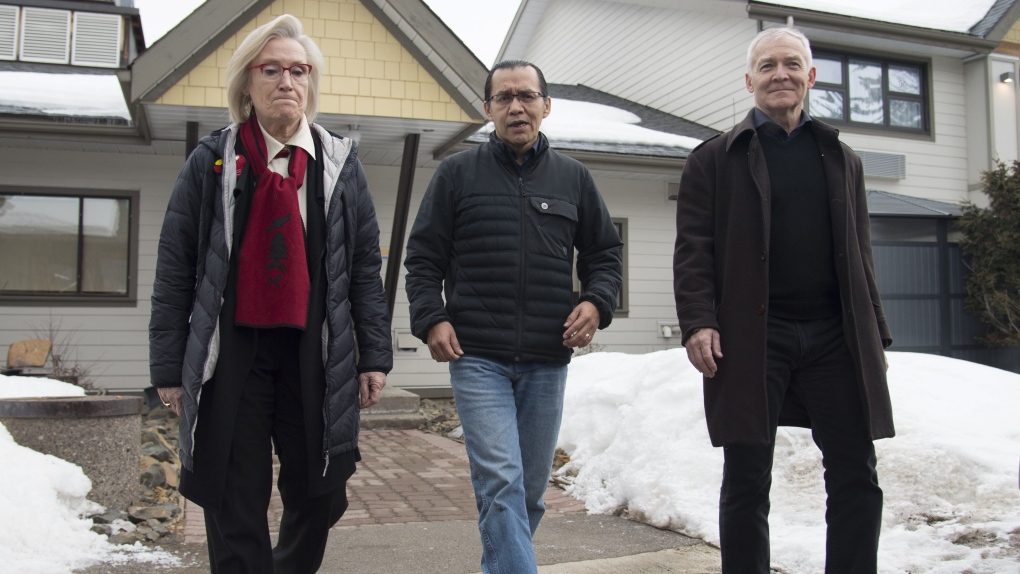 Wet'suwet'en hereditary leader Chief Woos, also known as Frank Alec, centre, Minister of Crown-Indigenous Relation, Carolyn Bennett, left, and B.C. Indigenous Relations Minister Scott Fraser arrive to address the media in Smithers, B.C., on March 1, 2020. Wet'suwet'en hereditary chiefs and representatives of the federal and provincial governments are expected to sign an agreement today that politicians say will rebuild relationships after anti-pipeline protests and blockades earlier this year. But the deal has also fractured an Indigenous community in B.C.'s Interior. THE CANADIAN PRESS/Jonathan Hayward

VICTORIA -- A virtual ceremony, where everyone involved pointed the freshly signed document at their cameras, marked the start of a new relationship between the hereditary chiefs of the Wet'suwet'en Nation and the federal and B.C. governments.

Government representatives and the hereditary chiefs who oppose Coastal GasLink's pipeline going across their traditional territories signed a memorandum of understanding that was negotiated amid countrywide blockades, marches and encampments earlier this year.

“One by one we signed as it was being recorded and everyone could see it,” Scott Fraser, B.C.'s minister of Indigenous relations and reconciliation, said in an interview on Thursday.

“Essentially, it was signed all today on the Zoom call,” said Fraser, who was in his ministerial office in Victoria during the event.

The traditional in-person signing ceremony was shelved to respect guidelines from public health officials to prevent the spread of COVID-19.

The memorandum does not address Wet'suwet'en opposition to the pipeline, which is part of a $40-billion liquefied natural gas export terminal project in Kitimat, on B.C.'s northern coast. But it states that the federal and B.C. governments recognize Wet'suwet'en rights and title are held under their system of governance.

It also places timelines over a 12-month period on negotiations affecting jurisdiction over land-use planning, resources, water, wildlife, fish, and child and family wellness, among other things.

Hereditary Chief Dini'ze Woos said in a statement the agreement starts work towards building better understanding and stronger relationships between the Wet'suwet'en, Canada and B.C.

Our priorities are to mobilize safety measures for all Wet'suwet'en people, promote the nation's existence and protect its traditions, the chief said.

Five elected Wet'suwet'en councils signed agreements with Coastal GasLink, allowing the 670-kilometre natural gas pipeline to be built through their territory in northern B.C. to Kitimat.

The elected chiefs said they were shut out of the negotiating process and issued a statement Thursday that said the agreement was not valid because it wasn't approved by the Wet'suwet'en people. The chiefs called for the resignation of Carolyn Bennett, federal Indigenous-Crown relations minister.

“We must express our complete lack of confidence in all parties in this fast-tracked negotiation process,” said the statement signed by four elected chiefs. “They have no mandate from the people and the simple logistics of trying to carry out complex negotiations during a pandemic are formidable.”

Bennett said in a statement that the agreement is an important step toward rebuilding the relationship with the Wet'suwet'en.

“As negotiations begin, a comprehensive, inclusive and transparent engagement process will support the parties so they can work together towards a final agreement on the affirmation and implementation of Wet'suwet'en rights and title,” she said.

Fraser said negotiations with the hereditary chiefs will include talks with elected Wet'suwet'en leaders, neighbouring Indigenous nations, local governments and others with an interest in what happens. He said the agreement allows for concerns about Wet'suwet'en governance issues to be addressed.

“That's an internal Wet'suwet'en issue,” he said. “It's about self-determination.”