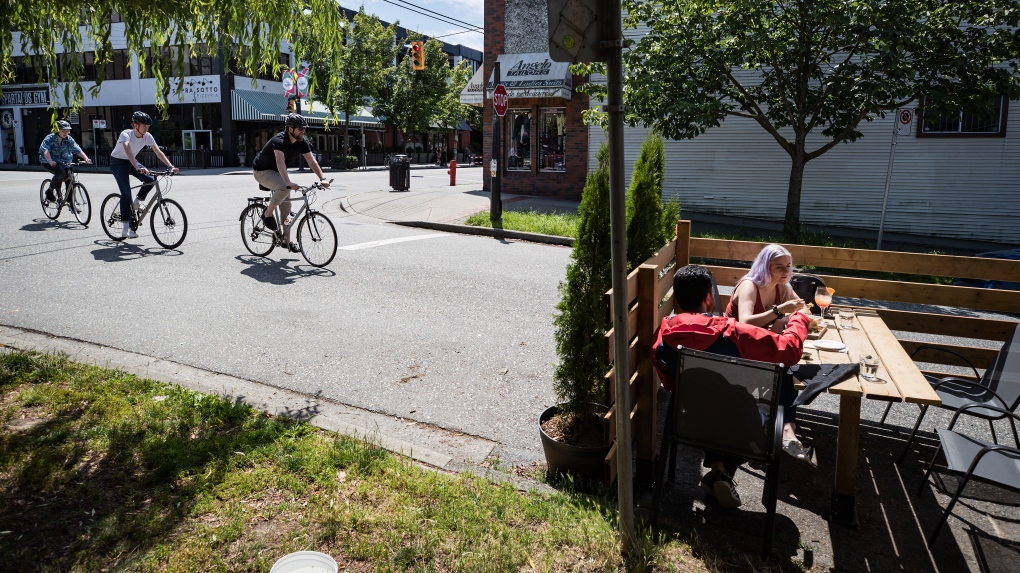 People dine at a temporary patio space on the street outside a restaurant as cyclists ride past in Vancouver, on Sunday, July 12, 2020. THE CANADIAN PRESS/Darryl Dyck
Vancouver -

The temporary patios that helped many Vancouver bars and restaurants survive the pandemic are becoming an annual summer fixture – though not every patio will be allowed to return next year.

Under a new program approved by city council this week, eligible establishments will be able to open seasonal patio space on either public or private property between April 1 and Oct. 31.

Mayor Kennedy Stewart said the temporary patio program created in response to the COVID-19 crisis launched a "new and vibrant patio culture" in Vancouver that the city is intent on maintaining.

"We're building on that success with a new annual summer patio program and ensuring residents and visitors can look forward to this new summer tradition for years to come,” Stewart said in a news release.

The city permitted nearly 700 temporary patios during the pandemic, but those permits are set to expire at the end of October.

When the seasonal program launches, there will be an application website to guide bars and restaurants through the process, with staff approving patios on a case-by-case basis.

In a news release, the City of Vancouver said it "may no longer be able to support some of the existing temporary patios," such as those attached to limited food establishments that don't have public restrooms.

It also said patios on "some arterial streets may not be viable as traffic volumes resume."

More details on the program, including the requirements bars and restaurants will have to meet in order to be eligible for seasonal patios, are expected to be shared in the coming weeks.

On the day Saskatchewan asked the federal government for help to deal with surging COVID-19 hospitalizations, Premier Scott Moe granted the province could have acted sooner on a renewed mask mandate or proof-of-vaccination policy.

A gang that kidnapped 17 members of a U.S.-based missionary group, including one Canadian, is demanding US$1 million ransom per person, although authorities are not clear whether that includes the five children being held, a top Haitian official told The Associated Press on Tuesday.

A Metro Vancouver woman is looking for answers following the untimely death of her dog aboard a flight last summer.

A group of quick-thinking young men were forced to get creative by using their turbans as a makeshift rope to help rescue a pair of hikers in a Metro Vancouver park earlier this month.

'I'm heartbroken by this': Celine Dion delays opening of Las Vegas shows due to medical reasons

Just weeks before Céline Dion was set to return to the stage in Las Vegas, the Quebec superstar is delaying her show due to "unforeseen medical symptoms," her team said in a news release.