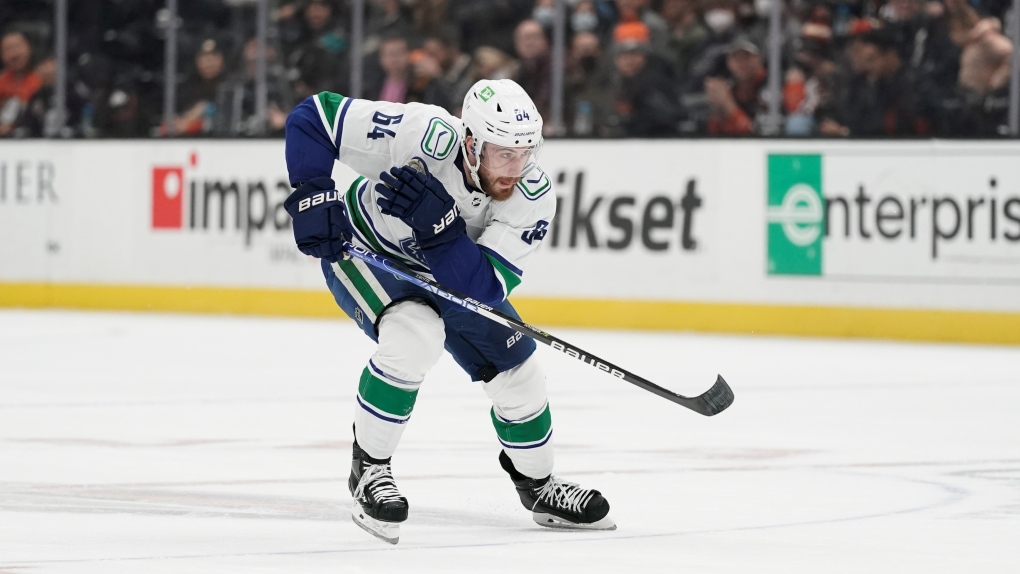 Leading up to his first deadline as general manager of the Vancouver Canucks, Patrik Allvin kept his focus on the horizon.

With his club up against the NHL salary cap and its playoff hopes dwindling, that meant shipping out pieces in order to make room for the future.

“I think our vision and our goal is more than just the next couple weeks,” Allvin said after the deadline passed Monday. “We want to create some cap space, we want to get younger. And I think we accomplished that here. This will just continue to put us in a better situation for this summer.”

The Canucks (30-26-8) sent depth forward Tyler Motte to the New York Rangers for a fourth-round pick in the 2023 NHL entry draft and picked veteran forward Brad Richardson off waivers from the Calgary Flames.

Vancouver also did some business Sunday, acquiring defenceman Travis Dermott from the Toronto Maple Leafs for a third-round pick in the 2022 draft and sending veteran blue liner Travis Hamonic to the Ottawa Senators for a third-round selection this year.

Motte, 27, is set to become an unrestricted free agent this summer and Allvin said the team wasn't able to reach a deal with his camp on a contract extension.

“Tyler is a good player but at this point we felt we couldn't come to an agreement there and wished him all the best and we thought we were able to get some return there in the fourth-round pick,” the GM said.

The native of St. Clair, Mich., has seven goals, eight assists in 49 for the Canucks this season. He missed the beginning of the campaign after having off-season neck surgery that limited him to 24 games last year.

Originally selected in the fourth round (121st overall) by Chicago in the 2013 draft, Motte has played for the Columbus Blue Jackets, Blackhawks and Canucks over six NHL seasons, tallying 35 goals and 27 assists in 260 games.

Richardson returns to Vancouver after spending two seasons with the Canucks in 2014-16.

The 37-year-old right-winger has notched two goals, two assists and 27 penalty minutes in 27 games for the Flames this year.

“With the injuries we had here, we weren't really sure if we were going to be able to get players in return in some of the deals that we were looking at,” Allvin said. “Brad has been here before, a versatile player, the leadership he has, I thought it would help us short term here with the versatility playing centre, wing and PK. He's excited to come back to Vancouver again.”

Richardson has also had stints with the Colorado Avalanche, L.A. Kings, Arizona Coyotes and Nashville Predators, putting up 109 points, 141 assists in 852 regular-season games.

Vancouver's front office took a holistic look at how to improve the lineup heading into the deadline, Allvin said.

“It's just not only to create cap space. You want to make sure that you're looking at the bigger picture, how you build a team and what do you want to accomplish,” he said. “I also think that we're looking in any way to improve our club.”

He wants to see more consistency from the group as the Canucks close out the season.

“It's not about going into streaks,” he said. “All good teams are having a consistent level in how you play night in and night out, what you do every day in practice, how you prepare yourself and being a pro.”

This report by The Canadian Press was first published March 21, 2022.