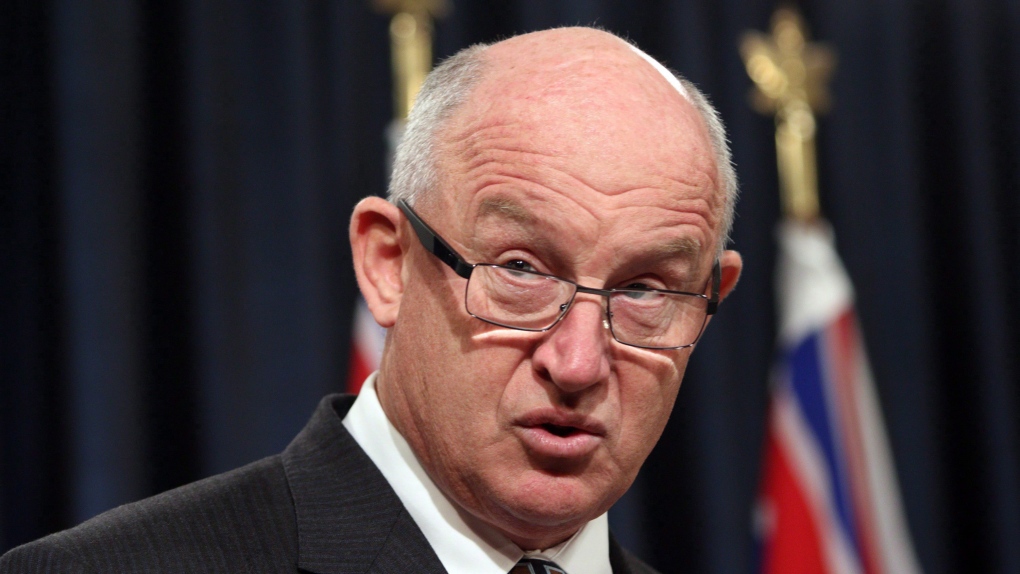 Minister of Public Safety and Solicitor General Mike Farnworth speaks to media about how non-medical cannabis will be regulated in the province during a press conference in the press gallery at Legislature in Victoria, B.C., on Monday February 5, 2018. THE CANADIAN PRESS/Chad Hipolito
Vancouver -

Last week, the government revealed just three violation tickets for $2,300 each have been issued since the proof-of-vaccination requirement at non-essential businesses took effect on Sept. 13.

That's despite the fact that dozens of businesses have openly flouted the law, including on one now-defunct website where unvaccinated customers could look for welcoming restaurants and shops in their area.

"I'm aware that there are those that think the rules don't apply to them," Farnworth said Monday. "Tickets have been issued and there will be more coming."

The minister said bylaw officers sometimes respond to complaints by trying to educate business owners. When that doesn't work, complaints can be escalated to an inter-agency body within the Ministry of Public Safety that involves police, WorkSafeBC, liquor inspectors and more.

"Enforcement officials and bodies are doing the job they're supposed to be doing," Farnworth said.

"The reality is most restaurants and establishments are, in fact, following the rules."

Those that don't can face more than just a fine. For restaurants, that could mean losing their liquor licence or even their business licence, the minister said.

Farnworth could not provide any further information on the three vaccine card violation tickets issued so far.

On Friday, the Ministry of Public Safety provided updated numbers on overall COVID-19 fines issued in the province over the last 13 months.

Since August 2020, some 436 tickets for $2,300 – totalling just over $1 million combined – have been issued to owners and organizers who broke B.C.'s public health order on gatherings and events. One of those tickets related to vaccine cards.

Another 44 tickets for $2,300 have been issued for violating the order on food and liquor serving premises, two of which involved vaccine cards.

Officials said they don't expect to see as many vaccine card tickets because of how many residents are already vaccinated. More than four million B.C. residents have received their first dose so far, and almost 3.8 million have received both.