Trump tower opens in Vancouver but the welcome isn't warm

VANCOUVER -- The furies unleashed by Donald Trump's rise to the U.S. presidency are shaking Vancouver, where a gleaming new Trump International Hotel and Tower is about to open.

The mayor wants its name changed. A city councilman calls it "over the top, glitz and glamour" that clashes with Canadian values. And the property developer who built it sounds traumatized by the whole affair.

The 69-storey building designed by one of Canada's most renowned architects has drawn praise for its sleek, twisting design. Prices for the condominiums have set records.

But Trump's politics, especially his criticism of immigrants, has caused such outrage that the mayor won't attend the grand opening next week. Even the Malaysian developer has had second thoughts about the partnership.

Joo Kim Tiah, who like the U.S. president is the son of a prominent businessman who got into global real estate, said he found it "extremely stressful" when Trump's statements about Muslims, Mexicans and women, among other things, made him extremely unpopular in Vancouver, one of the world's most diverse and progressive cities. Unfortunately, it was well after he signed the licensing deal to use the Trump brand.

"I was terrified," Joo Kim of Holborn Development told The Associated Press. "The people who ran the city were not happy with me. I was scared, but I think they understand. They understand that I'm trapped into -- not trapped, locked into -- an agreement."

The developer said he would have had no legal grounds to back out of the licensing deal, the terms of which have not been publicly released. "There would be severe legal implications," he said. 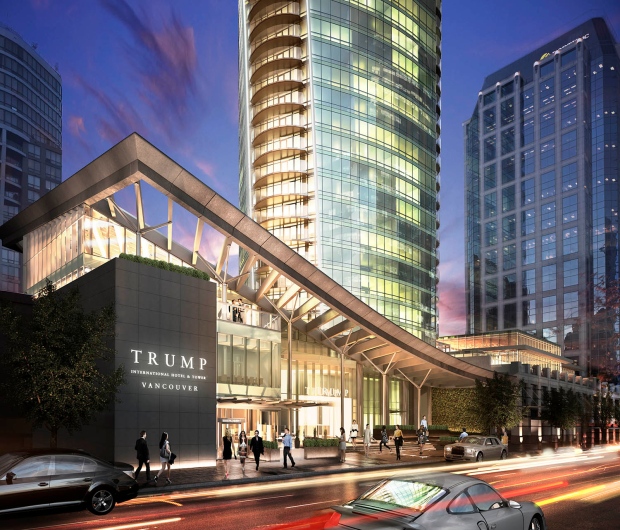 The hotel and residence will have its grand opening on Tuesday, with Trump sons Donald Jr. and Eric in attendance.

Located along an upscale six-lane downtown thoroughfare, the tower is the second-tallest in Vancouver and offers majestic mountain and ocean views. A one-bedroom apartment, at 699 square feet, starts around $1 million and the average 1,153-square-foot two-bedroom condo went for $1.7 million but has since gone up. Hotel rooms in the slow season start at around $300 Canadian.

The chief White House ethics lawyers under Presidents George W. Bush and Barack Obama have criticized Trump's turning over control of his business to his sons, saying it does not eliminate potential conflicts of interest. Legal experts also say Trump's overseas businesses could violate the "emoluments clause" of the U.S. constitution, which bars public officials from accepting payments or gifts from foreign governments or companies they control without the consent of Congress. A liberal-funded watchdog group has filed a lawsuit against Trump citing the clause.

The Vancouver tower is the second Trump-branded property to officially open since he took office, coming shortly after a golf course in Dubai. The Canadian project has generated much more debate, however, because of its location in a place that prides itself on multiculturalism. Forty-eight per cent of Vancouver's residents are foreign born.

Mayor Gregor Robertson, among others, has urged the developer to drop the Trump name. "Trump's name and brand have no more place on Vancouver's skyline than his ignorant ideas have in the modern world," he said in a letter.

City councilman Kerry Jang said the tower, which he calls a "beacon of racism ... intolerance, sexism and bullying," is out of place not just because of the views of the person whose name adorns it but for a style that he said clashes with low-key Canada. "It represents a brand that's over the top, glitz and glamor," Jang said. "It's not our thing. "

British Columbia Premier Christy Clark also said the Trump name doesn't represent the values of a city that is known for its support of environmental causes and open drug policies.

Donald Trump Jr. brushed off his father's Vancouver detractors in an interview with CTV television last year, calling them "ridiculous" and "disgusting." On Thursday, White House aide Hope Hicks directed all questions about the tower to the Trump Organization, which did not respond to requests for comment from the AP.

Joo Kim said he was saddened by the criticism, noting that people of 30 different ethnicities work at the hotel.

Silver and gold ingots of chocolate stamped "TRUMP" are displayed in hotel room minibars, part of the sumptuous decor in the $275-million ($360-million Canadian) tower.

Building general manager Philipp Posch said Trump and his controversies have little to do with the company. "President Trump, what he does is separate," said Posch, who also opened Trump's Chicago hotel. "I focus on getting the beds ready and putting a chocolate on your pillow for turndown."

Ten per cent of the condo owners are foreigners, more than double the average in Vancouver. Joo Kim said a few owners called during the campaign concerned that Trump's remarks would hurt their property values, but no one has sold. Still, he understands why people are upset. "I did a lot of soul searching because people were attacking me for it," he said.

Joo Kim's father, Tony Tiah Thee Kian, is one of Malaysia's richest men, and built his fortune trading stocks in the 1990s before expanding into property. He was charged in 1999 with abetting a businessman to defraud another brokerage, Omega Securities. In 2002, he was convicted on a reduced charge of providing a false report to the Kuala Lumpur stock exchange and resigned as head of his financial firm, TA Enterprise.

The father, who plans to attend the Vancouver tower opening, made a comeback in 2009 with the listing of his property arm, TA Global. Tiah groomed his eldest son as his successor, and 37-year-old Joo Kim was appointed CEO of TA Global last year. He also heads the family-owned Holborn Group, which says it earned $10.4 million from the Vancouver Trump project in 2015, representing 57 per cent of its profit.

Joo Kim says he chose the Trump brand in part because he felt a bond with Donald Jr. "We're both the oldest son and our fathers were really dominant and difficult at times," he said. "We may be OK financially but we didn't get the attention of our parents because our parents were always busy working. But at the same time there's a big expectation to be perfect."

Joo Kim has a picture on Instagram of himself at Trump's Jan. 20 inauguration, along with a picture of his ticket for the Liberty Ball, one of three balls the president attended.

A protest is planned for the Vancouver hotel's opening on Tuesday, but the city police department says there haven't been any special requests for security.

The neighbourhood where the tower is located seems split on its presence. Businesses on the block don't see a threat from the presence of the Trump name or possible protests. The general manager of the Equinox sport club, Zak Miller, said he hasn't seen any negative impact.

The reactions of many passers-by are the opposite.

Vancouver resident Jim Smith wondered why anyone would go inside. "It's bad enough just to walk in front," he said.

"I'm so against it," she said. "I think we should represent the city in better ways than his actions and his way of thinking."